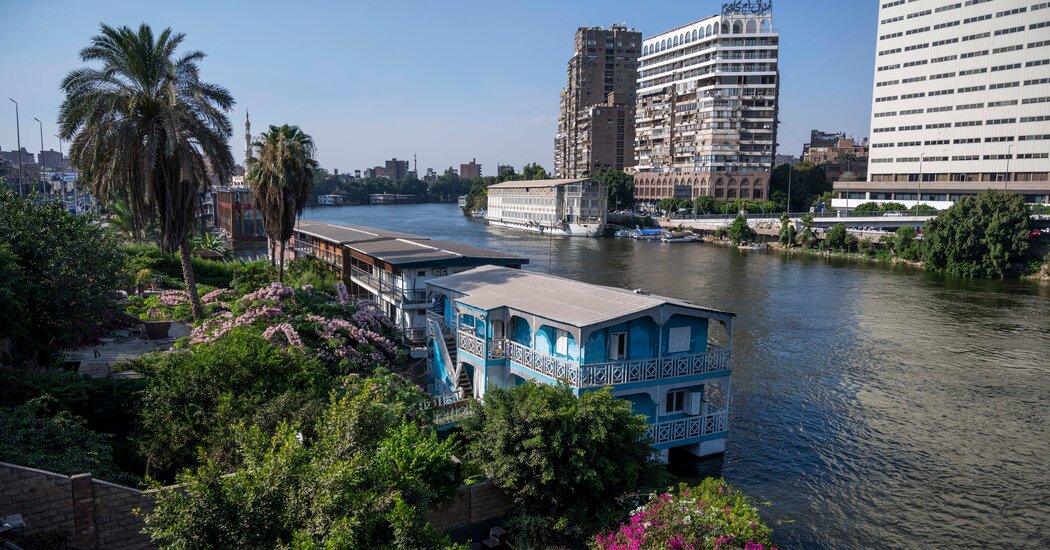 CAIRO — Rowing up to the cheerful turquoise houseboat on the Nile, a fisherman saluted the white-haired woman swaying on its deck.

“How are you holding up?” he called to the woman, Ekhlas Helmy, 88, as his wife dragged back the oars. “May God bring down the bully!”

This week may be their last sharing that particular stretch of the Nile, a narrow tract in central Cairo that, since the 1800s, has been lined with wooden houseboats — homes that double as living lore. This month, the government suddenly ordered Ms. Helmy’s houseboat and 31 others demolished, saying they were unsafe and unlicensed.

famous films were set on others. On the riverbank, life was peaceful, airy and private, nothing like the dusty, frenzied metropolis whose imagination the floating homes had captured for so long.

modernize — and monetize — much of Cairo by handing it over to private developers or the military, bulldozing several historic neighborhoods to build new high-rises, roads and bridges.

Mounira al-Mahdia, a celebrated 1920s diva. The houseboat of another singer, Badia Masabni, was said to be so popular among Cairo’s elite that a rumor spread at the time that governments were formed aboard.

Back then, there were at least 200 houseboats up and down the Nile. But under President Gamal Abdel Nasser, many of the structures were moved to clear the river for water sports, said Wael Wakil, 58, who was born and raised in the houseboat he still lives on.

That left about 40 boats moored where they sit now, next to Kit Kat, a neighborhood named after a local World War II-era nightclub popular among Allied soldiers.

installed a pair of German spies on one houseboat in the area — with the help, in some tellings, of a belly dancer.

largely open to the public, became crowded with private clubs and cafes.

The authorities have made clear that they want more of those: The houseboat owners say they have been told that they can pay more than $6,500 to temporarily dock elsewhere while they apply for commercial licenses to open cafes or restaurants in their former homes. But that, they argue, is hardly a fair or attractive option.

Today, some of the houseboats are owned by politicians and businessmen, others by bohemians, still others by middle-class Egyptians who know no other life.

Mr. Wakil said his family moved to their houseboat in 1961. He remembers growing up fishing off its deck. Whenever he dropped a toy in the Nile, he said, a passing boatman would rescue it.

Now Mr. Wakil, a retired finance manager, has packed up, and is getting ready to move to an apartment his wife owns in the desert.

“But nothing will come close to compensating for this,” he said.

From Ms. Soueif’s favorite place in the house, the dressing room where she gives her grandchildren baths, she can see a mango tree in her riverbank garden that has not fruited for four years. Suddenly, this year, it produced what promises to be a bumper crop.

But this type of mango cannot be picked before mid-July. By then, if nothing changes, she and her houseboat will be gone.

AUSTIN, Texas--(BUSINESS WIRE)--As the first multifamily management company to be recognized in the Public Relations and Marketing Excellence Awards, … END_OF_DOCUMENT_TOKEN_TO_BE_REPLACED

There have been whispers of cooling housing and rental prices in the San Francisco Bay Area, but that hasn't yet translated into practical, noticeable … END_OF_DOCUMENT_TOKEN_TO_BE_REPLACED

Cars pass in Independence Square at twilight in Kyiv, Ukraine, Monday, Oct. 31, 2022. Rolling ... [+] blackouts are increasing across Ukraine as the … END_OF_DOCUMENT_TOKEN_TO_BE_REPLACED