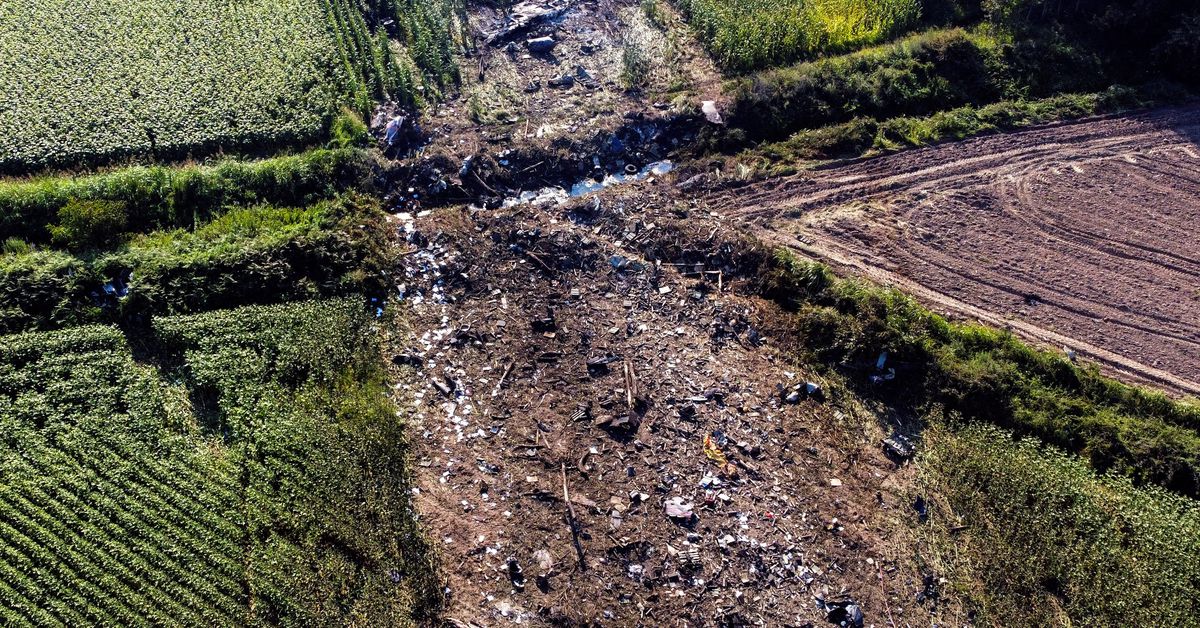 Witnesses said the aircraft had come down in a ball of flames near the city of Kavala before exploding on impact in corn fields around midnight local time. Earlier the pilot had reported engine trouble and had requested an emergency landing.

Drone images from the scene showed smouldering debris from the Antonov An-12 aircraft strewn across fields.

Ukrainian-based airline Meridian, which operated the aircraft, confirmed that all eight crew members had died in the crash. read more Ukraine’s foreign ministry said they were all Ukrainian citizens.

Greek authorities have recovered the body of one crew member so far, a civil protection service spokesman said. Six bodies have been located during an initial drone inspection of the area, a local mayor said.

Serbian Defence Minister Nebojsa Stefanovic said the plane had been carrying 11.5 tonnes of products, including mortar and training shells, made by its defence industry. The buyer of the cargo was the defence ministry of Bangladesh, he added.

A view of the crash site of an Antonov An-12 cargo plane owned by a Ukrainian company, near Kavala, Greece, July 17, 2022. REUTERS/Alkis Konstantinidis

Confirming that account, Denys Bogdanovych, Meridian’s general director, said the crash had no relation to the war currently raging in Ukraine.

Greek state TV ERT said the aircraft’s signal was lost soon after the pilot requested an emergency landing. Amateur video footage uploaded on ertnews.gr showed the aircraft in flames descending fast before hitting the ground in what appeared to be an explosion.

“I wonder how it didn’t fall on our houses,” one witness, Aimilia Tsaptanova, told reporters. “It was full of smoke, it had a noise I can’t describe and went over the mountain. It passed the mountain and turned and crashed into the fields.”

Greek authorities said the special disaster response unit and military staff, including mine clearance units, had been dispatched to the scene. They banned people from moving around the area and advised residents to keep doors and windows shut.

A fire brigade official said on Sunday that firefighters “felt their lips burning” and white dust was floating in the air. The substance has been examined and not found to be radioactive or biological material hazardous to public health, the mayor of the wider region, Philippos Anastasiades, told reporters.

Some businesses and households in the area suffered power cuts after the crash, possibly because the plane may have cut through cables or got burned by the explosion, local media said. More explosions occurred during the night after the crash.

There were no arrests in three quarters of last year’s fatal shootings, according to statistics provided by Mr. Krasner’s office, even as arrests for … END_OF_DOCUMENT_TOKEN_TO_BE_REPLACED