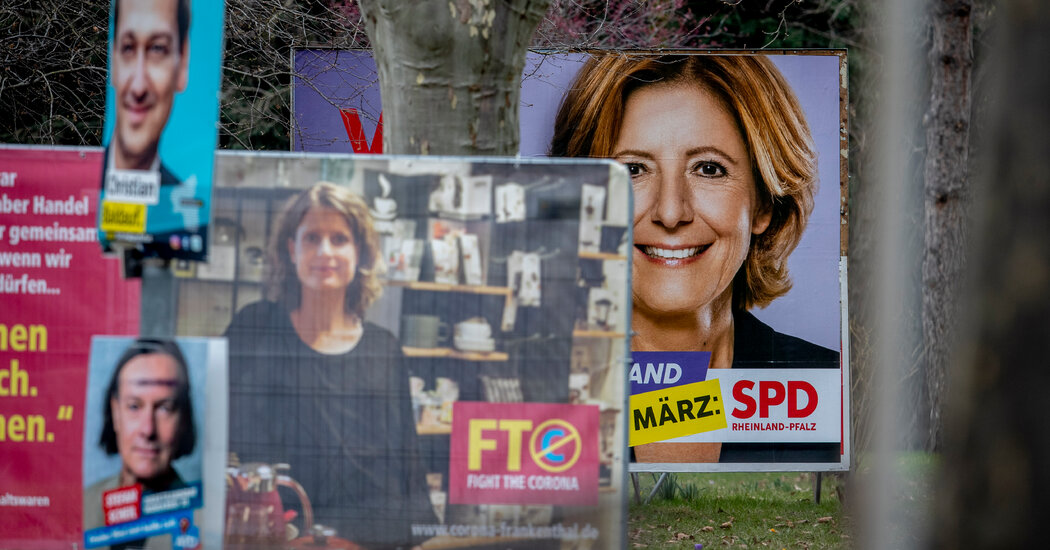 BERLIN — Voters in two southwestern German states are kicking off an election year on Sunday that could change the course of Europe’s largest economy after 16 years under the leadership of Chancellor Angela Merkel, who will be stepping down after a new government is sworn in.

The elections in the states of Baden-Württemberg and Rhineland-Palatinate are the first in a year that will see voting for new legislators in four more states, and for the country’s Parliament, which will be elected in September.

Sunday’s voting is taking place after largely muted election campaigns that were overshadowed by the threat of the coronavirus and by lockdowns. While neither race will serve as a clear bellwether for the fall election, the outcomes could indicate how voters are feeling about the two leading parties, the conservatives and the Greens, and help focus the contest for Ms. Merkel’s replacement.

“It is an unbelievably exciting election year,” said Thorsten Faas, a professor of political science at Berlin’s Free University. “A lot is still open, creating the possibility for movement in various directions.”

Armin Laschet, who took who took over as leader of the Christian Democratic Union in January.

Normally the party would put forward its leader as the candidate in the race for the chancellor, but Mr. Laschet has so far proved to be less popular with the German public than the governor of Bavaria, Markus Söder, who could instead be tapped as the conservative candidate.

Mr. Söder, who is also the head of the Bavaria-only Christian Social Union, has raised his profile as someone who takes tough, decisive action to halt the spread of the pandemic in his state, closing the border to Austria and sending vaccines to help the beleaguered Czech Republic.

Whoever is selected will face the Greens’ candidate, who has yet to be named, and Germany’s finance minister, Olaf Scholz, who is running for the Social Democrats.

Support for the Greens has nearly doubled since the election in 2017, making them the second strongest party heading into the national election, after the conservatives and ahead of the Social Democrats.

SAN FRANCISCO — Cleve Jones has lived in the Castro neighborhood for nearly 50 years, almost from the day he graduated from high school in Phoenix and … END_OF_DOCUMENT_TOKEN_TO_BE_REPLACED

A home inspection can spare you from unpleasant surprises after you buy. After crunching the numbers, searching your favorite neighborhoods, and … END_OF_DOCUMENT_TOKEN_TO_BE_REPLACED