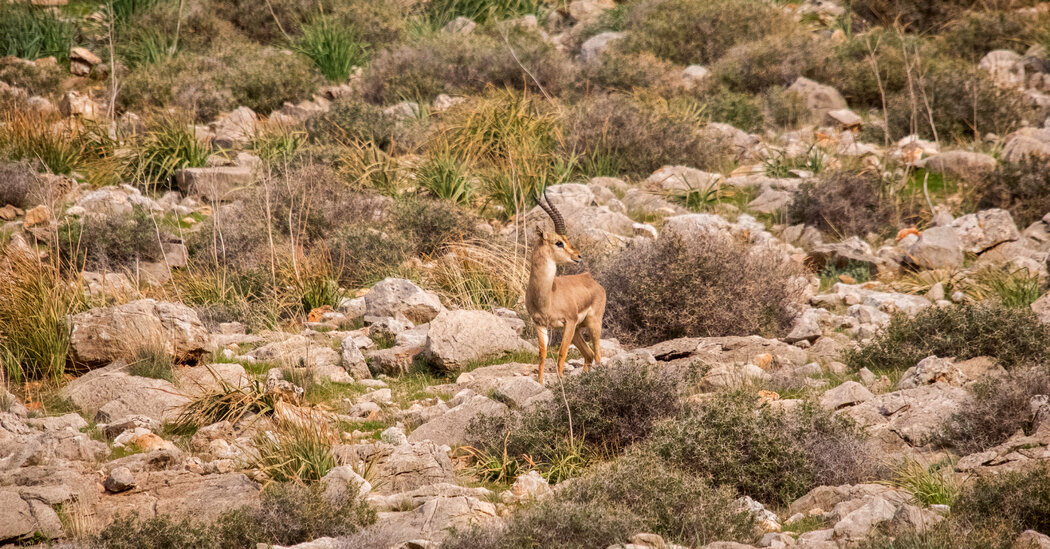 KIRIKHAN, Turkey — Turkey’s southern border with Syria has become a place of hardship and misery, with tented camps for people displaced by a decade of war on the Syrian side and a concrete wall blocking entrance to Turkey for all but the most determined.

Yet amid the rocky outcrops in one small area on the Turkish side, life is abounding as an endangered species of wild gazelle is recovering its stocks and multiplying.

The mountain gazelle, a dainty antelope with a striped face and spiraling horns, once roamed widely across the Middle East, and as Roman mosaics reveal, across southern Turkey as well. But by the end of the last century, it was hunted almost to extinction, with only a dwindling population of 2,500 left in Israel, according to the International Union for Conservation of Nature.

In Turkey, the gazelle was forgotten and thought to no longer exist. The only ones officially recorded were a subspecies, known as goitered gazelles, in Sanliurfa Province in the southeast of the country.

The rediscovery and survival of the mountain gazelle in Turkey has been largely thanks to one man and his love of nature.

Yasar Ergun, a village teacher who became a veterinarian and professor at Hatay Mustafa Kemal University in the city of Antakya, heard in the mid-1990s from an old hunter that there were wild gazelles in the mountains along the border with Syria.

A keen hiker, he set out to try to find them. Barely 25 miles from Antakya — the ancient city of Antioch — Kurdish villagers knew about them and shepherds occasionally saw them. The gazelles live on the rocky hillsides, where their markings and coloring make them almost invisible. But they come down in groups to graze and find water on the surrounding agricultural land.

The professor spotted his first one in 1998 and, after a decade of observing them, estimated that there were about 100 living in the area.

With a small grant for a teaching project, he bought a camera and telephoto lens, which led to a close encounter and a breakthrough discovery.

“It was the mating season,” he recalled. “I ran to the road, and the male ran toward me to defend his females. It was very unusual.”

When he examined the photos, he realized the gazelles differed from those in southeastern Turkey.

“This one was light brown, with some parts white, and the horns were completely different,” he said. He was sure he was looking at the mountain gazelle, but found little interest in his claims in academic circles, he said.

“I sent the photographs around — professors just laughed,” he said.

He drew on the help of Tolga Kankilic, a biologist, who gathered samples of dung, fur and skin from the remains of dead gazelles for genetic testing, and found that the DNA matched that of mountain gazelles.

The discovery presented Mr. Ergun with an altogether more important task: to help the gazelles survive. There were several threats to them — lack of water and habitat especially — but by far the greatest danger was illegal hunting. Hunting is allowed only under license in designated areas in Turkey, but illegal hunting is rife.

The gazelles had disappeared completely from other regions, including Adana, farther west, where American soldiers stationed at Incirlik air base used to hunt them 20 years ago, he said.

“The end of a genetic source is the same as the collapse of Earth,” he said. “Nature needs biodiversity.”

He won a grant from the World Wildlife Fund in Turkey for a grass-roots project with local villagers and bought mountain gear and amateur walkie-talkies for several shepherds, who began monitoring the gazelles. They dug basins in the rock to collect water for the gazelles, though it took the animals months to trust the water source.

With his knowledge of village life, Mr. Ergun began softly, gaining the support of local shepherds, educating children to protect the gazelles and even encouraging a local Kurdish legend of a holy man who lived with the gazelles and milked them.

With the hunters, Mr. Ergun and his helpers adopted an approach of traditional courtesy and respect, drinking tea with them but never mentioning their hunting.

“We never tried to use force to stop them,” he said. “We would say, ‘Hello, we are from the Nature Project.’ Sometimes silence is more powerful than talking.”

The local people were Kurds, a mountain people with their own language and culture — and a history of resistance to the Turkish state.

Mr. Ergun also needed the cooperation of the Turkish Army, which has a base in the area. The gazelles occupy a narrow strip of territory along the border a few miles wide and less than 20 miles long that is mostly a restricted military zone.

Yet the military restrictions, and the outbreak of war across the border in Syria 10 years ago, helped the gazelles in unexpected ways. Turkey built a cement wall along the border and dismantled an old buffer fence, which opened up more territory for the gazelles and protected them from straying into Syria, where hunting remains a threat.

The project grew, securing government support for a breeding center and sanctuary for orphaned and injured gazelles. The gazelles began to thrive, increasing from about 235 in 2012 to more than 1,100 last year, according to an official count by Turkish government agencies.

In 2019, President Recep Tayyip Erdogan of Turkey declared a protected area of 50 square miles for the gazelles, and plans for a cement factory and quarries in the area were canceled.

Turkey is enormously rich in flora and fauna, but is industrializing rapidly and lagging in nature conservation, said Sedat Kalem, the conservation director of the World Wildlife Fund Turkey, which gave two small grants to help start the gazelle project. The government did not step in to rescue the gazelles, and it was left to a local initiative, he said.

“But we were happy to be instrumental in this result,” he said. “The locals have done a great job. If everybody can take care of their own environment, that is the key for overall success for protecting biodiversity.”

Not all of the villagers are convinced of the importance of protecting the gazelles.

“It’s actually a pain,” said Nuray Yildirim as she baked flatbread in an outdoor oven in the village of Incirli. “There are too many of them, and they eat the chickpeas and the wheat.”

But others described the gazelles as a blessing, even holy.

“They have been living here since the time of our ancestors,” said Mehmet Hanafi Cayir, a farmer. “The richness they bring will come to our door.”

Mr. Ergun’s attachment is primarily scientific. He said the increase in gazelles had brought wolves and even hyenas back to the region, which reflects a healthy ecosystem.

He also has plans for the future. As the numbers increase, he wants to reintroduce gazelles to other areas of Turkey and beyond.

“The habitat is suitable for these gazelles,” he said.

“Maybe we can reintroduce them in Saudi Arabia, Yemen, Syria, Iraq,” he added. “They lost them just 30 years ago. The people of the Middle East suffered so much. We should offer them this.”

Kevin McKenzie and Martine van Hamel were standing in the dining room of their weekend house in Woodstock, N.Y., trying to figure out when they got … END_OF_DOCUMENT_TOKEN_TO_BE_REPLACED