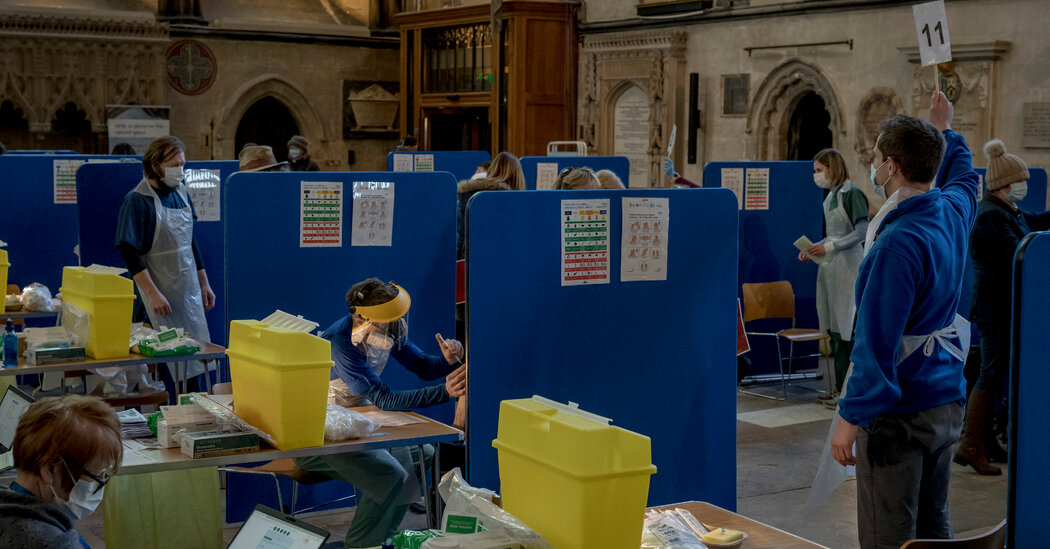 LONDON — In early February, the government of Britain announced that every person living in the country would be eligible for a coronavirus vaccine, free of charge, regardless of their immigration status. Public health experts praised the decision, necessary to ensure the safety of everyone, while others raised alarms at the prospect of noncitizens jumping ahead of eligible Britons.

“No one will get their vaccination out of turn,” Edward Argar, a British health minister, said in an interview. The disease, he added, is “looking for victims, it’s not worried about immigration status.”

As in much of the world, the virus has ravaged immigrant communities in Britain, many of which supply the bulk of frontline workers in grocery stores and domestic care. Many immigrants also live in crowded, multigenerational housing that exposed older family members throughout the pandemic. The government’s so-called vaccine amnesty was designed to encourage even those without legal status to come forward and get vaccinated.

But more than a month after the announcement, many undocumented immigrants said they remained fearful that asking for a vaccine would risk arrest or deportation. Others said they had been denied registration at local doctors’ offices, which often ask for identification or proof of address — although neither is required to access primary care.

hostile environment” policy that aimed to force those without legal status to leave the country by blocking their access to jobs, bank accounts and free medical care.

“It’s all very well to say, ‘Anyone can get a vaccine,’” said Phil Murwill, the head of services at Doctors of the World U.K. “But for years there was a deliberate policy of creating a hostile environment for undocumented immigrants that has put people off from accessing any kind of care. And we’re seeing that play out now.”

Outside estimates put the number of undocumented immigrants in Britain somewhere between 800,000 and 1.2 million, or just under 2 percent of the population. (The British government has not estimated the size of this population since 2005, when it was said to be 430,000.) It is a significant group that includes many at-risk workers, and one that epidemiologists say the vaccination campaign — which has so far given nearly half the population at least one dose — must reach if Britain hopes to safely exit the pandemic.

This month, Ghie Ghie and Weng, two undocumented domestic workers from the Philippines, walked arm in arm to the Science Museum in London, one of more than the 1,500 vaccination sites across the country. (Like other undocumented people interviewed for this article, the women asked to be identified only by their first names for fear of arrest.) Ghie Ghie had gotten her first shot of the vaccine the previous weekend and was hoping Weng could get hers.

prioritize vaccinating those in jobs done primarily by undocumented immigrants, like farm work. But Britain did not extend the social care worker category to include domestic workers, a Department of Health and Social Care spokesperson confirmed in an email.

“We are caring for children and elderly and the disabled,” said Marissa Begonia, founder of the Voice of Domestic Workers. “It’s not a lie. By our definition, we are social care workers.”

Weng works part time for two families, traveling between the households each week. “I want to get my vaccine in case the government asks, so that I can show I am not putting anyone at risk,” she said as she waited in line at the vaccine center. She re-emerged about 30 minutes later, proudly clutching the card showing she’d received the first dose of the AstraZeneca vaccine.

In 2018, the Home Office, the government ministry in charge of immigration, officially withdrew a data-sharing agreement that used patient information from the National Health Service to track down people thought to be violating immigration rules. (Data sharing still exists for deportation cases involving serious crimes.) The Department of Health and Social Care has said that anyone undergoing vaccination, testing or treatment for the coronavirus would not be subject to immigration status checks.

two agencies share patient information, most commonly in cases of undocumented immigrants with an unpaid medical debt of 500 pounds (around $690) for more than two months. Primary care, including treatment by a family doctor, is free whereas secondary care — hospital visits, surgeries, maternal care — is not.

Those working on behalf of undocumented immigrants say that this hybrid health care system only adds to the confusion about what benefits undocumented immigrants are entitled to. “The government needs to suspend all charging and data sharing operations if they want to prioritize the widest possible access to public health,” said Zoe Gardner, a policy adviser for the Joint Council for The Welfare of Immigrants.

When Huseyin, a 30-year-old undocumented chef, found out that he could see a family doctor for free — and eventually be called for a vaccine — he said he immediately tried to register. That was three months ago.

He said a family clinic in London had asked for a valid passport or ID before turning him away. A few weeks later, he moved to Brighton, England, for a full-time job at a restaurant. He tried again with a local doctor there but was told — incorrectly — that he needed an N.H.S. number to register with them.

“N.H.S. guidance says nothing about documentation, but nobody teaches you when you’re in medical school about a patient’s right to access a G.P.,” said Dr. Elizabeth Bates, an associate general practitioner in the West Midlands. “That the N.H.S. is for everybody is something many British people are very intrinsically proud of, but even some doctors don’t understand that their practice may have these policies that prevent people from registering.”

Huseyin is now getting registration help from Doctors of the World U.K., a nonprofit that works to ensure access to health care for those with unclear immigration status. He’s young, though, and is unlikely to be called for a vaccine for months.

“I want the vaccine to protect myself and my community,” he said. “We are everywhere — the corner shops, restaurants, factories, hotels. Undocumented people are everywhere.”

MIAMI--(BUSINESS WIRE)--Intelli Smart Homes, the leading smart home technology company, has been recognized as one of America’s fastest-growing … END_OF_DOCUMENT_TOKEN_TO_BE_REPLACED

Customers outside a Walmart store in Torrance, California, US, on Sunday, May 15, 2022. Walmart Inc. is scheduled to release earnings figures on May … END_OF_DOCUMENT_TOKEN_TO_BE_REPLACED

The past few years have been brutal on homebuyers' budgets. Would-be buyers have been priced out of some of the most desirable neighborhoods thanks to … END_OF_DOCUMENT_TOKEN_TO_BE_REPLACED