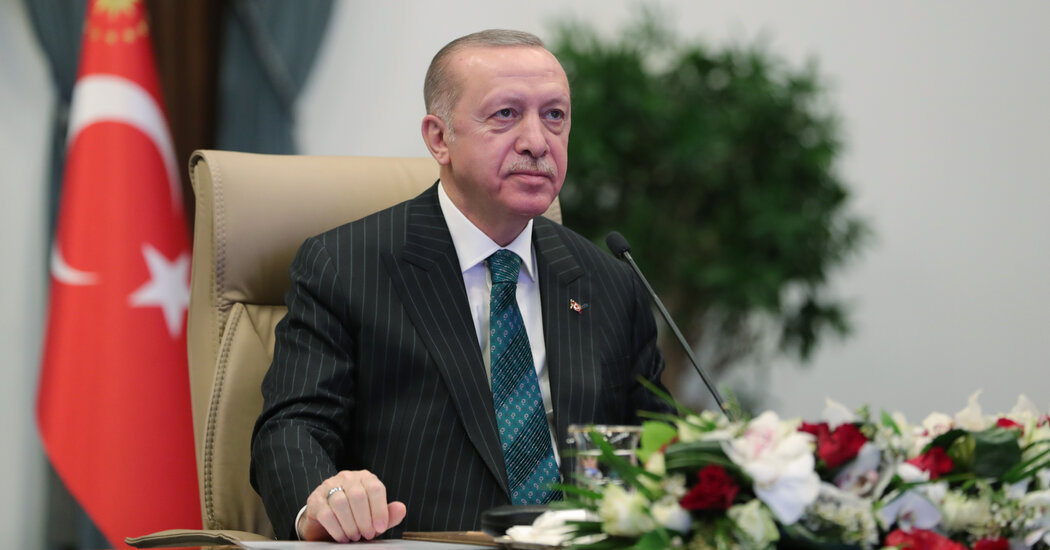 ISTANBUL — In two surprise midnight decrees, President Recep Tayyip Erdogan withdrew Turkey from an international treaty on preventing violence against women and removed the head of the central bank, moves likely to please his followers but further estrange him from Western partners.

Mr. Erdogan had floated the idea of withdrawing from the treaty, known as the Istanbul Convention, for more than a year as he courted conservative and nationalist followers to shore up his flagging popularity. Opposition parties and women’s groups were opposed amid concerns over rising violence against women in Turkey and women’s groups immediately announced a protest rally on Saturday afternoon.

The president, who has increasingly insisted on greater control over the Central Bank, appears to have opposed a raising of interest rates by the central bank chief, Naci Agbal, before dismissing him.

Mr. Erdogan has steadily concentrated more authority into his own hands over his 18 years in power and his latest actions came amid a flurry of attacks on political opponents that seem intended to solidify his political base.

purchasing the Russian S400 missile system, and facing heavy fines against the state bank Halkbank for its role in violating sanctions against Iran. Mr. Biden has not talked to Mr. Erdogan since taking office, but his administration officials have already brought concerns about human rights into the mix.

Mr. Erdogan has also reiterated his desire to join the European Union. But his latest actions were announced just after a video conference with senior E.U. officials on Friday in which they called for a de-escalation in tensions and the moves appeared to be a calculated snub.

The Council of Europe said on Saturday that Turkey’s withdrawal from the Istanbul Convention was “deplorable because it compromises the protection of women of women in Turkey, across Europe and beyond.”

described the move as “a despicable act of recidivism, as well as a harbinger of early elections.”

Burak Ulgen, a writer, tweeted: “Abolishing Istanbul Convention means patting the men on the back, and tell them ‘Please go ahead you can kill women.’ The blood of all the women murdered in this country is on your hands.”

The decrees followed recent attacks on political opponents of Mr. Erdogan that seemed aimed at satisfying his political supporters.

On Wednesday, Turkey’s top prosecutor filed a complaint to the Constitutional Court to close down H.D.P., the largest pro-Kurdish party, accusing it of links to a Kurdish militant group. That brought a swift warning from the State Department that such a move “would unduly subvert the will of Turkish voters.”

On the same day, the Turkish Parliament voted to strip a prominent H.D.P. lawmaker and human rights advocate of his seat and ordered him removed from the chamber. And on Friday, a leader of the country’s Human Rights Association was detained in a morning raid on his house, one of similar 20 detentions in Istanbul and Ankara.

Mr. Erdogan’s moves against the H.D.P. and human rights defenders who are considered sympathetic to the Kurds are seen as a political calculation to raise the standing of his alliance with the Nationalist Movement Party, which has been losing support to its rival Iyi Party in recent months. The tactics also appear to be an attempt to divide the opposition.

MIAMI--(BUSINESS WIRE)--Intelli Smart Homes, the leading smart home technology company, has been recognized as one of America’s fastest-growing … END_OF_DOCUMENT_TOKEN_TO_BE_REPLACED

Customers outside a Walmart store in Torrance, California, US, on Sunday, May 15, 2022. Walmart Inc. is scheduled to release earnings figures on May … END_OF_DOCUMENT_TOKEN_TO_BE_REPLACED

The past few years have been brutal on homebuyers' budgets. Would-be buyers have been priced out of some of the most desirable neighborhoods thanks to … END_OF_DOCUMENT_TOKEN_TO_BE_REPLACED