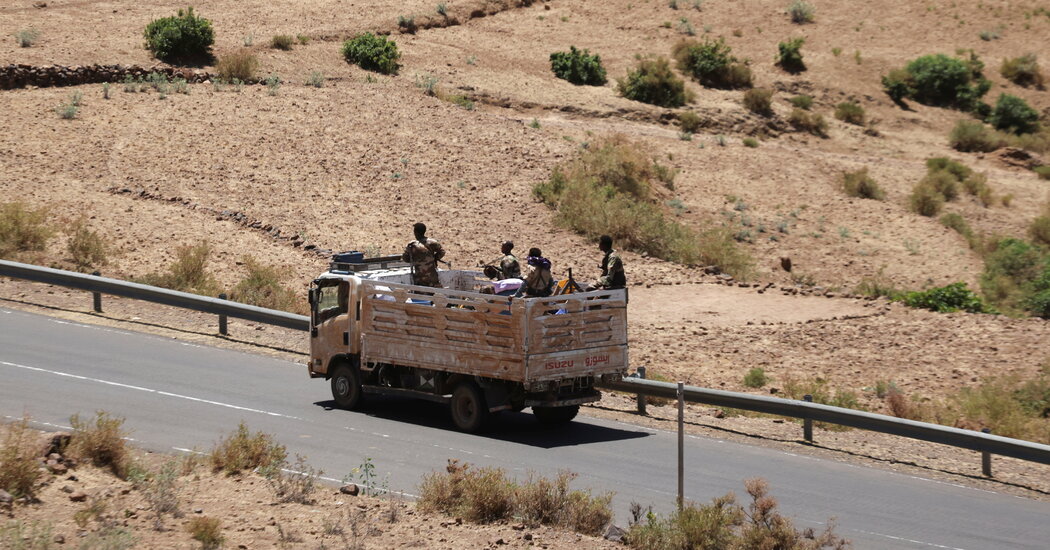 NAIROBI, Kenya — After months of denial, Prime Minister Abiy Ahmed of Ethiopia admitted this week that Eritrean troops had been fighting in Tigray, the war-torn northern Ethiopian region where the brutal conflict between pro-government and local fighters has become a byword for atrocities against civilians.

On Friday, under mounting American and international pressure, Mr. Abiy went one step further and announced that the Eritrean soldiers had agreed to go home.

Mr. Abiy’s statement, issued after a meeting with President Isaias Afwerki of Eritrea, offered a faint glimmer of hope amid a stream of horrific reports about widespread looting, massacres and sexual violence in Tigray.

soldiers from Eritrea — even as Mr. Isaias, the dictatorial leader of the notoriously secretive country, denied that his troops were even present in Tigray.

Mr. Abiy flew to meet Mr. Isaias on Thursday, days after an envoy sent by President Biden pressed the Ethiopian leader to halt the carnage, and to reinforce American calls for an immediate withdrawal of Eritrean troops.The United States has publicly called for Eritrean soldiers to be withdrawn from Tigray.

On Friday Eritrea’s information minister, Yemane Ghebremeskel, appeared to confirm Mr. Abiy’s declaration that an Eritrean troop withdrawal had been agreed upon. Public statements from both governments “underline full agreement and consensus on all issues discussed,” he said in a text message after Mr. Abiy had left the Eritrean capital, Asmara.

Mr. Abiy launched a military campaign in Tigray on Nov. 4, accusing rebellious Tigrayan leaders of orchestrating an attack on a major military base and trying to topple the federal government.

As the fighting gathered pace, reports of gross abuses against civilians began to emerge from Tigray. Ethiopian soldiers, allied fighters from ethnic Ahmara militias, and fighters loyal to the Tigray People’s Liberation Front all faced accusations.

But United Nations officials and human rights groups singled out Eritrean troops for many of the worst violations. Last weekend, Mr. Abiy spent five hours in talks with U.S. Senator Chris Coons, who had been sent to Ethiopia by President Biden to convey his alarm at the deteriorating situation.

In a briefing to reporters on Thursday, Mr. Coons said that the talks were “forthright” at times, and that Mr. Abiy had reiterated his promise to investigate human rights abuses in Tigray, including “credible reports of sexual violence as a tool of war.”

But Mr. Abiy has fallen short on such commitments before, Mr. Coons said, and the United States intends to keep up the pressure.

“It’s actions that are going to matter,” he said.

On Friday a State Department spokeswoman welcomed Ethiopia’s announcement, calling it “an important step” toward de-escalation.

In a mark of the impunity that has come to characterize the Tigrayan conflict, Ethiopian soldiers dragged civilians from a bus on a major road in Tigray and executed four of them in front of aid workers from Doctors Without Borders, the group said in a statement Thursday.

The pact earned Mr. Abiy the Nobel Peace Prize in 2019 and helped Mr. Isaias, one of the world’s most repressive leaders, to emerge from international isolation. After the Tigray war erupted in November, though, critics said the two leaders were mostly united by their shared hostility toward the leaders of Tigray.

It was unclear on Friday whether Mr. Abiy’s announcement signaled a potential breakthrough in ending the fighting in Tigray or another feint by two leaders under international pressure.

In his statement, Mr. Abiy said Eritrea had agreed to withdraw its forces “out of the Ethiopian border,” where, effective immediately, Ethiopian soldiers were to assume border guarding duties.

But it was unclear if that included Eritrean troops stationed deep inside Tigray, where many of the worst atrocities have occurred.

Amnesty International has blamed Eritrean forces for the massacre of hundreds of civilians in Axum, a city in northern Tigray. Sexual violence survivors from Tigray have blamed horrific assaults on Eritrean troops.

over 500 rape cases have been reported at five clinics in Tigray, although the actual number is likely far higher.

“Women say they have been raped by armed actors, they also told stories of gang rape, rape in front of family members, and men being forced to rape their own family members under the threat of violence,” the official, Wafaa Said, said.

Exactly how many Eritrean troops are stationed inside Tigray and where is unclear. Much of the region remains out of bounds for aid workers and reporters, and sporadic fighting continues in rural and mountainous areas.

Still, the departure of all Eritrean troops would likely pose a serious military challenge to Mr. Abiy.

The Ethiopian army fractured in the early days of the war, when hundreds and possibly more Ethiopian soldiers defected to the rebel side, according to Western officials. Since then, Mr. Abiy has regained control of a swath of Tigray with help from his allies — ethnic Amhara fighters and soldiers from Eritrea.

Were the Eritreans to leave en masse, some analysts say, government forces might struggle to maintain their grip on the parts of Tigray that they now control.

Chief Covelli said Mr. Crimo planned the shooting for several weeks, but that the authorities had not yet established what his motive was. “We have no … END_OF_DOCUMENT_TOKEN_TO_BE_REPLACED

Kevin McKenzie and Martine van Hamel were standing in the dining room of their weekend house in Woodstock, N.Y., trying to figure out when they got … END_OF_DOCUMENT_TOKEN_TO_BE_REPLACED