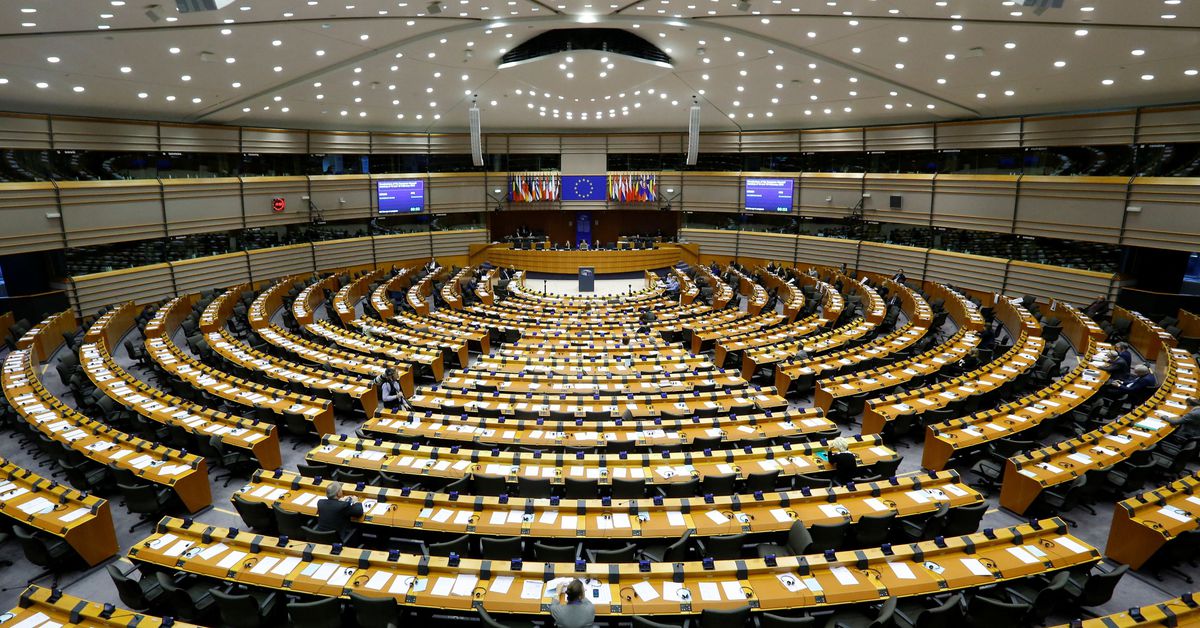 A general view of the hemicycle at the European Parliament in Brussels, Belgium, February 24, 2016. REUTERS/Yves Herman/File Photo

BRUSSELS, June 7 (Reuters) – The European Parliament will vote this week on a raft of EU climate change policies designed to cut Europe’s emissions over the next decade, with proposals facing multiple amendments and the outcome uncertain for some of the most ambitious plans.

The plans aim to put the 27-country European Union – the world’s third-largest economy – on track for its goal of reducing net greenhouse gas emissions 55% by 2030, from 1990 levels.

Under the EU’s complex lawmaking process, parliament will debate eight proposals on Tuesday and vote on them on Wednesday, to confirm its position for negotiations with EU countries on the final legislation.

Members of the parliament are having to consider hundreds of amendments that could increase or weaken the impact of the EU’s climate policies.

One proposal represents the biggest overhaul of the EU carbon market since its launch in 2005. This would reinforce the scheme to cut emissions for the sectors it covers by 61% by 2030, under an original plan by the European Commission, which drafts EU laws.

Some lawmakers will attempt to strengthen that to a 67% emissions cut. Peter Liese, the parliament’s lead negotiator on the carbon market reform, said he was “optimistic” a compromise for a 63% emissions cut would win majority support.

Liese also predicted a “controversial vote” on the EU’s world-first plan to impose a CO2 levy on imports of carbon-intensive goods like steel and cement, with lawmakers split over how quickly the scheme should replace the free CO2 permits those industries currently receive.

Options up for the vote on Wednesday include a phase-out of free CO2 permits by 2030, 2032 or 2035. Industries have urged lawmakers not to pull forward the date, which would hike the price they pay to pollute. read more

Another is the EU’s plan for a 100% cut in CO2 emissions from new cars by 2035 – effectively banning new combustion engine car sales in the EU. Some amendments would weaken that to a 90% CO2 cut in 2035.

AUSTIN, Texas--(BUSINESS WIRE)--As the first multifamily management company to be recognized in the Public Relations and Marketing Excellence Awards, … END_OF_DOCUMENT_TOKEN_TO_BE_REPLACED

There have been whispers of cooling housing and rental prices in the San Francisco Bay Area, but that hasn't yet translated into practical, noticeable … END_OF_DOCUMENT_TOKEN_TO_BE_REPLACED

Cars pass in Independence Square at twilight in Kyiv, Ukraine, Monday, Oct. 31, 2022. Rolling ... [+] blackouts are increasing across Ukraine as the … END_OF_DOCUMENT_TOKEN_TO_BE_REPLACED