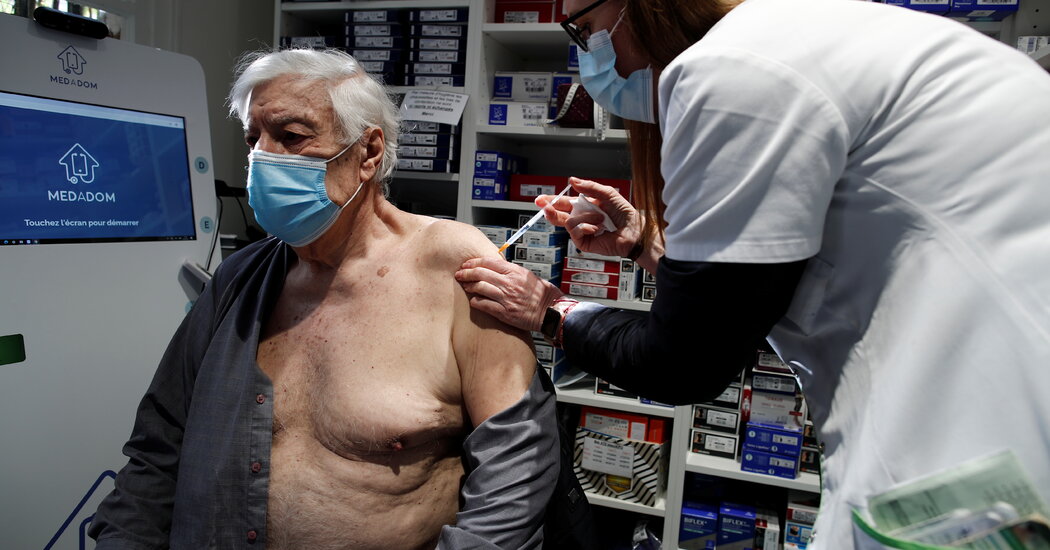 Governments across Europe raced on Friday to lift suspensions on the AstraZeneca vaccine and reassure an exhausted and anxious public that it was safe amid a new wave of infections that led many countries to reimpose harsh restrictions on movement and businesses.

German officials warned that plans to ease restrictions by Easter would have to be put on hold and said that more measures might be needed in the weeks ahead. Paris was one of many cities across France where people were essentially ordered to stay at home. Italy entered its third national lockdown on Monday, and Poland will put in place its own lockdown on Saturday.

The rapid moves to tighten what were already relatively stringent restrictions came as nearly every country in Europe that had halted use of the AstraZeneca vaccine — including France, Germany Italy and Spain — said they would start using it again.

But the brief halt in the use of the vaccine underscored the slow pace of mass inoculation campaigns, which led officials to warn that the only way to control the virus was to impose restrictions.

900,000 last week, according to the World Health Organization. But this spring, it was supposed to be different.

Vaccines are rolling out, albeit at a halting pace. They are effective. They can stop serious illness and death. And for the vast majority of people in Europe, and around the world, they are agonizingly out of reach.

three times more vaccines per 100 people than countries in the European Union — meaning that it is likely to be months rather than weeks before enough people will be inoculated for vaccines to turn the tide of the pandemic.

“There are not yet enough vaccine doses in Europe to stop the third wave by vaccination alone,” Germany’s health minister, Jens Spahn, said on Friday. “Even if the deliveries from E.U. orders come reliably, it will still take a few weeks until the risk groups are fully vaccinated.”

The mass vaccination efforts across the European Union were thrown into deeper turmoil this week as more than a dozen countries suspended the use of the AstraZeneca vaccine while reports of a possible link to rare side effects involving blood clots were investigated.

On Thursday, the bloc’s medical regulator, the European Medicines Agency, said that its review came to the firm conclusion that the vaccine was “safe and effective.”

Political leaders rushed to try and undo any damage to the public’s trust and faith in AstraZeneca and vaccines more broadly — with a number of them rolling up their sleeves and getting the shots themselves to drive the point home.

reported nearly 40,000 new coronavirus cases on Wednesday, according to a New York Times database — the highest number since November, when a second wave of infection forced the entire country into lockdown.

On Friday, the authorities ordered the lockdown of Paris once again, one of many regions in the country where a weary public was told the now familiar refrain: The situation is getting worse and desperate action must be taken to keep it from deteriorating even further.

tracking coronavirus restrictions around the world, said it was remarkable how similar the pattern playing out across Europe in recent days was to the situation a year ago.

Kevin McKenzie and Martine van Hamel were standing in the dining room of their weekend house in Woodstock, N.Y., trying to figure out when they got … END_OF_DOCUMENT_TOKEN_TO_BE_REPLACED