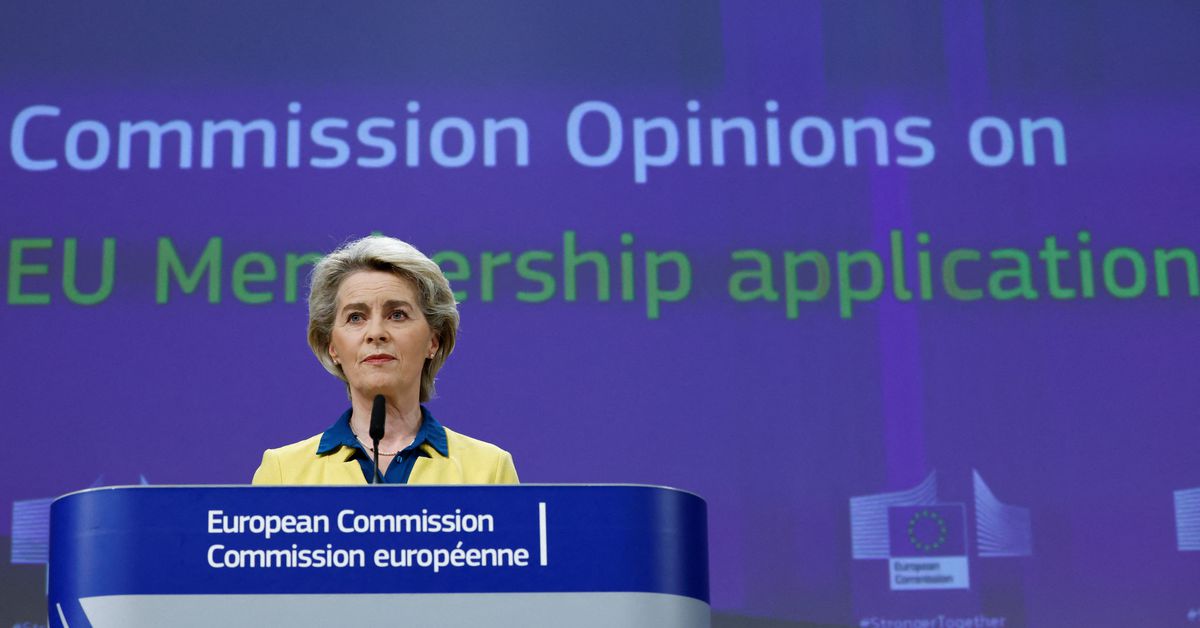 BRUSSELS/KYIV, Ukraine, June 17 (Reuters) – The European Union gave its blessing on Friday for Ukraine and its neighbour Moldova to become candidates to join, in the most dramatic geopolitical shift to result from Russia’s invasion.

“Ukraine has clearly demonstrated the country’s aspiration and the country’s determination to live up to European values and standards,” the EU’s executive Commission head Ursula von der Leyen said in Brussels. She made the announcement wearing Ukrainian colours, a yellow blazer over a blue shirt.

Moldova’s President Maia Sandu hailed a “strong signal of support for Moldova & our citizens!” and said she counted on the support of EU member states.

“We’re committed to working hard,” she said on Twitter.

While recommending candidate status for Ukraine and Moldova, the Commission held off for Georgia, which it said must meet more conditions first.

Von der Leyen said Georgia has a strong application but had to come together politically. A senior diplomat close to the process cited setbacks in reforms there.

Leaders of EU countries are expected to endorse the decision at a summit next week. The leaders of the three biggest – Germany, France and Italy – had signalled their solidarity on Thursday by visiting Kyiv, along with the president of Romania.

Ukraine and Moldova will still face a lengthy process to achieve the standards required for membership, and there are other candidates in the waiting room. Nor is membership guaranteed – talks have been stalled for years with Turkey, officially a candidate since 1999.

But launching the candidacy process, a move that would have seemed unthinkable just months ago, amounts to a shift on par with the decision in the 1990s to welcome the ex-Communist countries of Eastern Europe.

“Precisely because of the bravery of the Ukrainians, Europe can create a new history of freedom, and finally remove the grey zone in Eastern Europe between the EU and Russia,” Zelenskiy said in his nightly video address.

If admitted, Ukraine would be the EU’s largest country by area and its fifth most populous. All three hopefuls are far poorer than any existing EU members, with per capita output around half that of the poorest, Bulgaria.

President Vladimir Putin ordered his “special military operation” officially to disarm and “denazify” Ukraine. One of his main objectives was to halt the expansion of Western institutions which he called a threat to Russia.

But the war, which has killed thousands of people, destroyed whole cities and set millions to flight, has had the opposite effect. Finland and Sweden have applied to join the NATO military alliance, and the EU has opened its arms to the east.

Within Ukraine, Russian forces were defeated in an attempt to storm the capital in March, but have since refocused on seizing more territory in the east.

The nearly four-month-old war has entered a punishing attritional phase, with Russian forces relying on their massive advantage in artillery firepower to blast their way into Ukrainian cities.

Ukrainian officials said their troops were still holding out in Sievierodonetsk, site of the worst fighting of recent weeks, on the east bank of the Siverskyi Donets river. It was impossible to evacuate more than 500 civilians who are trapped inside a chemical plant, the regional governor said.

In the surrounding Donbas region, which Moscow claims on behalf of its separatist proxies, Ukrainian forces are mainly defending the river’s opposite bank.

Near the frontline in the ruins of the small city of Marinka, Ukrainian police made their way into a cellar searching for anyone who wanted help to evacuate. A group of mainly elderly residents huddled on mattresses in candlelight.

“There’s space down here, you could join us,” joked one man as the officers came in. A woman named Nina sighed in the darkness: “There is nowhere. Nowhere. Nowhere to go. All the houses have been burnt out. Where can we go?”

In the south, Ukraine has mounted a counter-offensive, claiming to have made inroads into the biggest swath still held by Russia of the territory it seized in the invasion. There have been few reports from the frontline to confirm the situation in that area.

The poshest place in California's Coachella Valley is The Madison Club. This exclusive gated community in La Quinta is where A-listers and tycoons … END_OF_DOCUMENT_TOKEN_TO_BE_REPLACED

KOROPY, Ukraine — Four men tugged at long strips of fabric to lift a coffin out of the gaping hole in the backyard of a small house. They flung the … END_OF_DOCUMENT_TOKEN_TO_BE_REPLACED