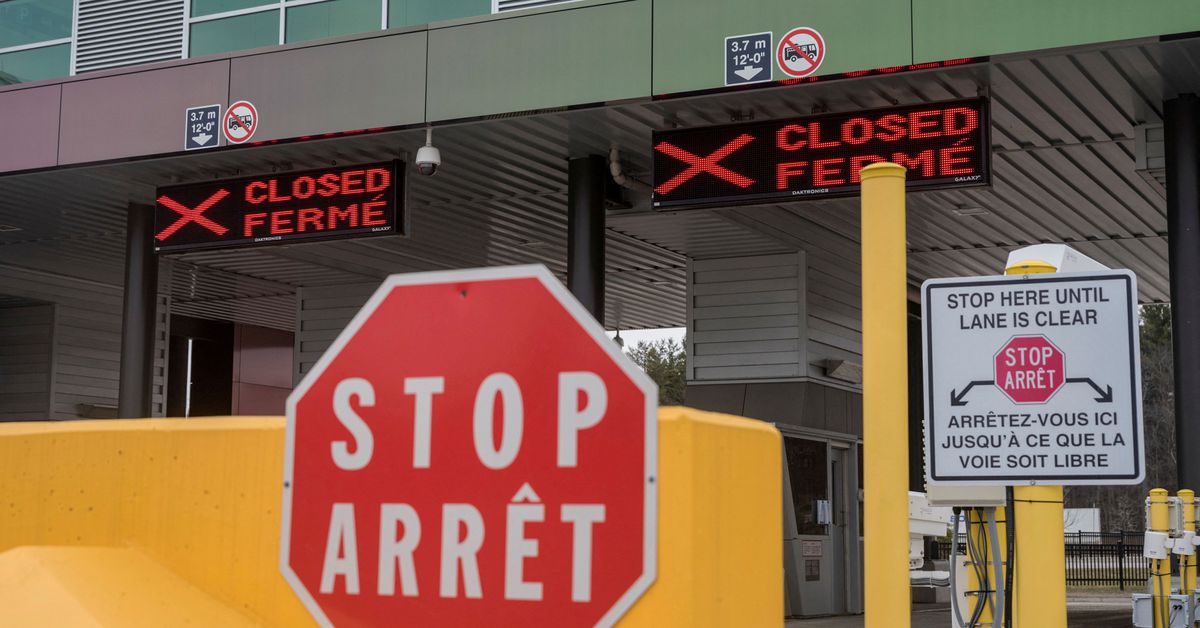 Two closed Canadian border checkpoints are seen after it was announced that the border would close to “non-essential traffic” to combat the spread of novel coronavirus disease (COVID-19) at the U.S.-Canada border crossing at the Thousand Islands Bridge in Lansdowne, Ontario, Canada March 19, 2020. REUTERS/Alex Filipe//File Photo

TORONTO, April 27 (Reuters) – Canada is locking up more people in immigration detention without charge after the numbers fell during the pandemic, government data obtained by Reuters shows.

Authorities cite an overall rise in foreign travelers amid easing restrictions but lawyers say their detained clients came to Canada years ago.

Canada held 206 people in immigration detention as of March 1, 2022 – a 28% increase compared with March 1 of the previous year. Immigration detainees have not been charged with crimes in Canada and 68% of detainees as of March 1 were locked up because Canada Border Services Agency (CBSA) fears they are “unlikely to appear” at an immigration hearing, according to the data.

The rise puts Canada at odds with Amnesty International and other human rights groups that have urged Ottawa to end its use of indefinite immigration detention, noting CBSA has used factors such as a person’s mental illness as reason to detain them.

A CBSA spokesperson told Reuters that “when the number of entries (to Canada) goes up, an increase in detention is to be expected.” CBSA has said in the past it uses detention as a last resort.

A lawyer told Reuters her detained clients have been in Canada for years.

Julia Sande, Human Rights Law and Policy Campaigner with Amnesty, called the increase in detentions “disappointing but not surprising,” although she was reluctant to draw conclusions from limited data.

The number of immigration detainees in Canada dropped early in the pandemic, from a daily average of 301 in the fourth quarter (January through March) of 2019-20 to 126 in the first quarter (April through June) of 2020-21.

Detaining fewer people did not result in a significant increase in no-shows at immigration hearings – the most common reason for detention, according to Immigration and Refugee Board data.

The average number of no-shows as a percentage of admissibility hearings was about 5.5% in 2021, according to that data, compared to about 5.9% in 2019.

No-shows rose as high as 16% in October 2020, but a spokesperson for the Immigration and Refugee Board said this was due to people not receiving notifications when their hearings resumed after a pause in the pandemic.

Refugee lawyer Andrew Brouwer said the decline in detention earlier in the pandemic shows Canada does not need to lock up as many non-citizens.

“We didn’t see a bunch of no-shows. We didn’t see the sky fall … It for sure shows that the system can operate without throwing people in jail,” Brouwer said.

He added that detainees face harsh pandemic conditions in provincial jails – including extended lockdowns, sometimes with three people in a cell for 23 hours a day.

Refugee lawyer Swathi Sekhar said CBSA officials and the Immigration and Refugee Board members reviewing detentions took the risk of COVID-19 into account when deciding whether someone should be detained earlier in the pandemic but are doing so less now.

“Their position is that COVID is not a factor that should weigh in favor of release,” she said.

“We also see very, very perverse findings … [decision-makers] outright saying that individuals are going to be safer in jail.”

The Immigration and Refugee Board did not immediately respond to a Reuters request for comment.

The Seattle Seahawks are very much still in the running for Baker Mayfield. (Photo by Stacy ... [+] Revere/Getty Images) Getty Images The Seattle … END_OF_DOCUMENT_TOKEN_TO_BE_REPLACED

(CNN) — Kim Kyung-seop recalls going to cheap bars after class with his friends, where they binged on as much makgeolli as possible. "You know the … END_OF_DOCUMENT_TOKEN_TO_BE_REPLACED