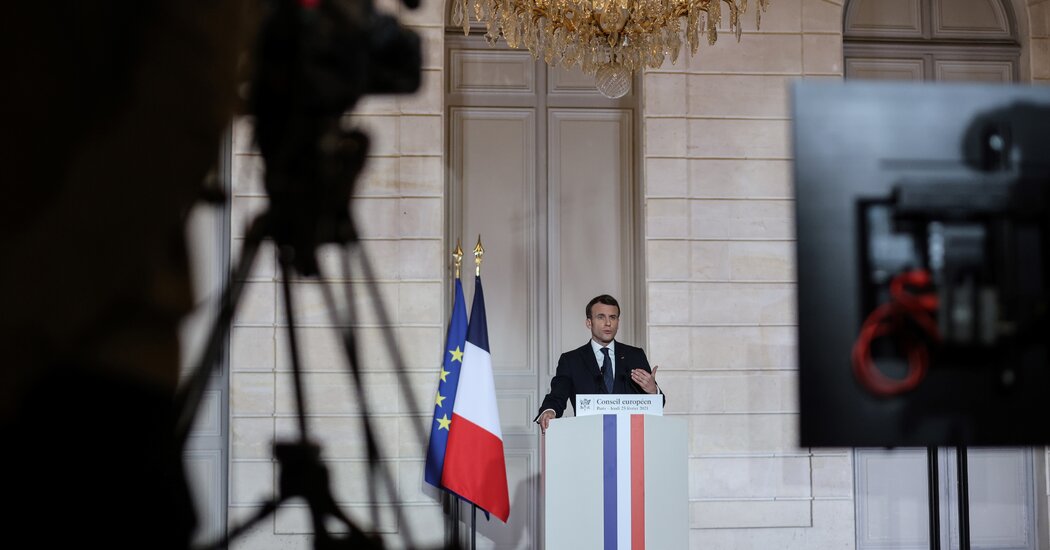 PARIS — In a recent meeting with a handful of foreign correspondents, President Emmanuel Macron of France philosophized for 100 minutes on the record, without notes. He dotted his conversation with Americanisms — “game-changer,” “honest brokers” — that must have had de Gaulle turning in his grave. He dissected French “universalism.” He mused on colonial history. He identified hatred, turbocharged by social media, as “a threat to democracy itself.”

The performance was typical of Mr. Macron, and unusual for any head of state, the equivalent of tightrope walking without a net. Yet, the many words revealed little of the man himself. Four years into an often tumultuous term, facing an election next year, Mr. Macron remains an enigma to even his own country.

Backed by the left in 2017, Mr. Macron now has more support on the right. Once a free-market reformer, he now extols the role of the state and protection “at any cost” in the age of Covid-19. Once the leader of a freewheeling movement that swept away old political hierarchies, he now sits comfortably at the pinnacle of power, his authority accentuated by terrorism and pandemic.

“With Macron we have gone to the limit of presidential domination in the Fifth Republic,” said Alain Duhamel, a political commentator.

At a time when identity politics and the anger of some marginalized Muslim immigrants have raised questions about France’s ability to embrace the diversity of its society, Mr. Macron wants to preserve and broaden a French universalism much criticized for disguising forms of exclusion, particularly for Muslims.

“Our universalism is not in my view a doctrine of assimilation,” he told the foreign correspondents. “It is not the negation of differences. I believe in pluralism within our universalism.”

In its subtle parsing, its attempted reconciliation of the irreconcilable, the finesse was very Macron. France has tended to view its model as assimilationist in opposition to American multiculturalism. So, this was a departure. But if pluralism “is not multiculturalism,” what does it look like?

Mr. Macron went on to speak of the millions of French people who are descended from migrants, whose identity and dreams are “totally France” but whose families may have “other languages or other dreams.”

All this, he said, “must be recognized as an opportunity”; and France must understand that in recent years “our integration policies have not worked” and that this failure has been felt most acutely by those who have “a different first name or a different skin color.” Those, he added, who “are different from the majority — I do not like the word minority.”

Like “multiculturalism,” “minority” is a no-no in France, because in its self-image this is a nation of undifferentiated citizens drawn to an ennobling, universal idea. If Mr. Macron can indeed reinvigorate this idea through celebration of diversity, he will have broadened the meaning of Frenchness.

On one subject, Mr. Macron has never wavered: the defense of Europe’s great postwar push for integration to assure peace. He will carry the banner of Europe into his election campaign, at a time when France will have the rotating presidency of the European Union for the first time since 2008.

His priority will be the pursuit of a “sovereign” Europe, with the technology and military capacity to stand up for the values — liberty, pluralism, the rule of law — that he believes define it.

That was courageous in 2017, with the fervor of Brexit and former President Donald Trump’s anti-Europe rhetoric raging; and perhaps, faced by Ms. Le Pen, it is no less so today.

In a time of rising authoritarianism, the French president, like Ms. Merkel, has been a significant democratic counterweight, a strong supporter of multilateralism and free societies.

Mr. Duhamel, the political commentator, identified Macronism as “a civil and democratic Bonapartism, where everything goes up to the leader, and there is a quest for disruption and reform, through the whip.”

And does France, at once a conservative and revolutionary society, like this style enough to give the mystery man five more years?

“The election will be decided between two negative emotions, hate and fear,” Mr. Duhamel sighed. “If hate prevails in May next year, Mr. Macron will be defeated. If it’s fear, after a convulsive period, faced by an uncertain future, then he will win.”

The poshest place in California's Coachella Valley is The Madison Club. This exclusive gated community in La Quinta is where A-listers and tycoons … END_OF_DOCUMENT_TOKEN_TO_BE_REPLACED

KOROPY, Ukraine — Four men tugged at long strips of fabric to lift a coffin out of the gaping hole in the backyard of a small house. They flung the … END_OF_DOCUMENT_TOKEN_TO_BE_REPLACED