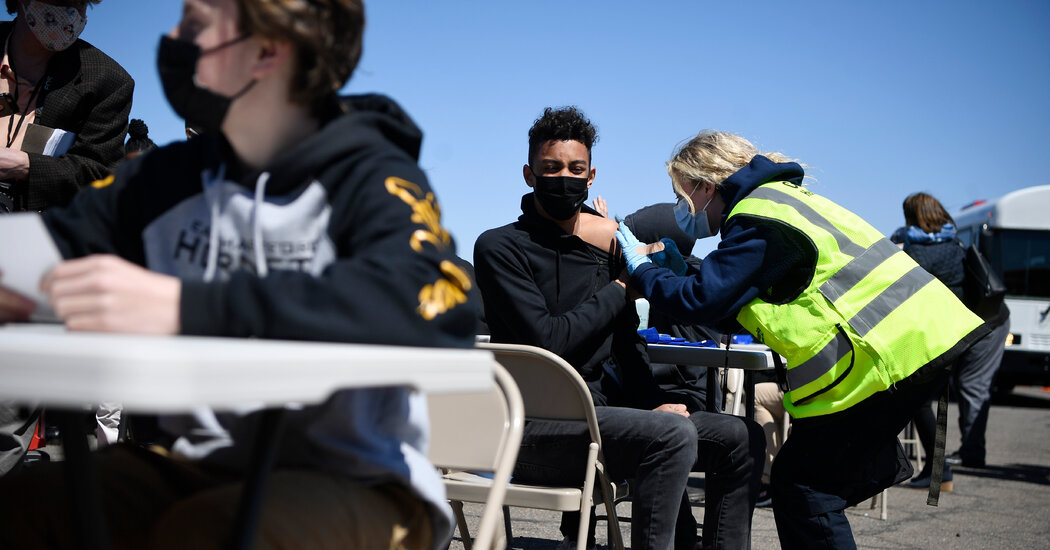 WASHINGTON — The Food and Drug Administration is preparing to authorize use of the Pfizer-BioNTech coronavirus vaccine in adolescents 12 to 15 years old by early next week, according to federal officials familiar with the agency’s plans, opening up the U.S. vaccination campaign to millions more people.

Some parents have been counting down the weeks since Pfizer announced results from its trial in adolescents showing that the vaccine is at least as effective in that age group as it is in adults. Vaccinating children is key to raising the level of immunity in the population and bringing down the numbers of hospitalizations and deaths.

The clearance, in the form of an amendment to the existing emergency use authorization for the Pfizer vaccine, could come as early as late this week. If it is granted, the Centers for Disease Control and Prevention’s vaccine advisory panel is likely to meet the following day to review the clinical trial data and make recommendations for the vaccine’s use in adolescents.

The expansion would be a major development in the country’s vaccination campaign and welcome news to some parents who are anxious to protect their children during summer activities and before the start of the next school year. It also poses another challenge to policymakers who are struggling to vaccinate a large percentage of adults hesitant to get the shot. Many more could refuse to inoculate their children.

Pfizer reported several weeks ago that none of the adolescents in the clinical trial who received the vaccine developed symptomatic infections, a sign of significant protection. The company said that volunteers produced strong antibody responses and experienced about the same side effects seen in people ages 16 to 25.

Stephanie Caccomo, a spokeswoman for the Food and Drug Administration, said she could not comment on the timing of the agency’s decision.

“We can assure the public that we are working to review this request as quickly and transparently as possible,” she said.

Over 100 million adults in the United States have been fully vaccinated. But the authorization would arrive in the middle of a delicate and complex push to reach the 44 percent of adults who have not yet received even one shot.

With much of the world clamoring for the surplus of vaccines made in the United States, the Pfizer-BioNTech shot’s use in adolescents will also raise questions about whether the supply should be targeted to an age group that so far appears to be mostly spared from severe Covid-19.

increasing pressure to give away some of the country’s supply of vaccines. Some federal officials have also urged the administration to decide soon how much vaccine is needed, lest doses expire or be shipped to states and go unused. The federal government has bought 700 million doses of three federally authorized vaccines to be delivered before the end of July, well beyond what would be needed to cover every American.

White House officials said last week that it intended to make up to 60 million doses of the AstraZeneca vaccine available to other countries, so long as federal regulators deem the doses safe. The vaccine has not yet received clearance from American regulators. But global health groups and public health experts said that commitment was not enough.

Dr. Rupali J. Limaye, a Johns Hopkins University researcher who studies vaccine use and hesitancy, said that the United States should donate excess Pfizer-BioNTech shots — and any surplus from other manufacturers — to India and other countries that have had severe outbreaks and pleaded for help.

“From an ethical perspective, we should not be prioritizing people like them over people in countries like India,” Dr. Limaye said of adolescents.

If the United States holds onto its supply of Pfizer-BioNTech, she said, it should be reserved for adults while health officials grapple with the phase of the vaccination campaign that requires more personalized, local outreach.

“We still need to go over hesitant adults, while simultaneously maybe starting at 14- or 15-year-olds,” Dr. Limaye said. “But the priority should still be adults.”

according to figures collected by the C.D.C.

Tens of millions more Pfizer-BioNTech doses — about three weeks’ worth, according to one federal official — have been manufactured and are in various stages of readiness, awaiting final tests before being shipped.

Moderna expects results soon from its own clinical trial involving adolescents ages 12 to 17, followed by results for children 6 months to 12 years old later this year.

The Food and Drug Administration’s authorization is likely to substantially ease concern among middle school and high school administrators planning for the fall. If students are able to be vaccinated by then, that could allow more normal gatherings and let administrators plan further ahead in the academic year.

If you’ve ever dreamed of a quiet life on a boat in Alaska, this new waterfront listing can help you realize that vision.Of course, there's always … END_OF_DOCUMENT_TOKEN_TO_BE_REPLACED