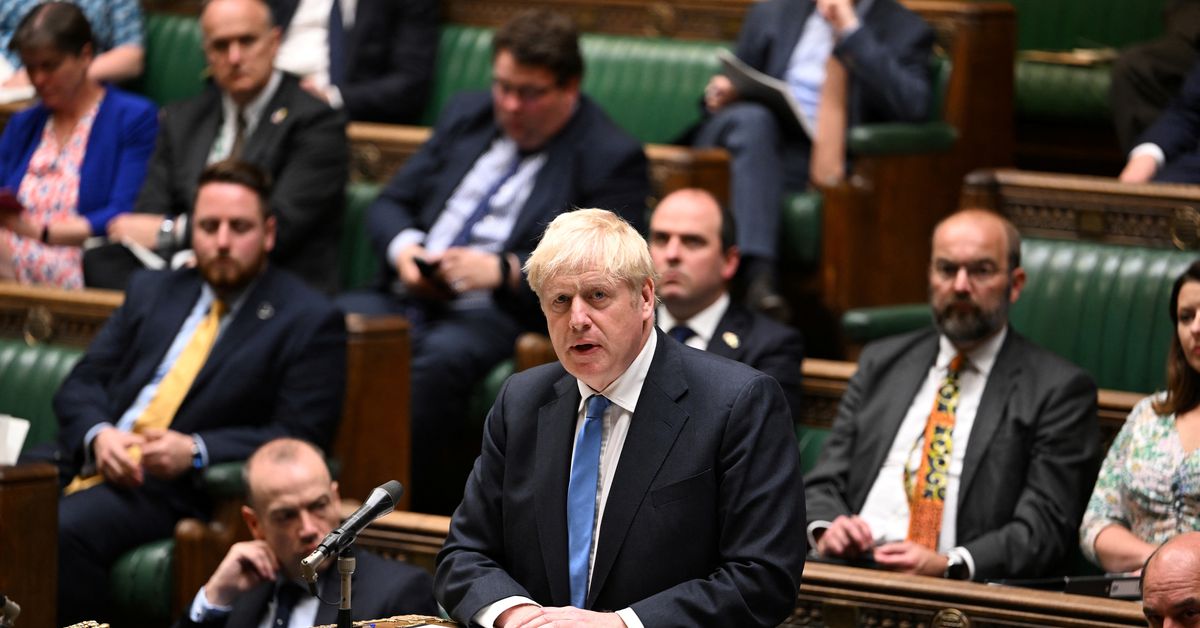 LONDON, July 7 (Reuters) – Boris Johnson will announce his resignation as British Prime Minister on Thursday, a government source said, after he was abandoned by ministers and his Conservative Party’s lawmakers who said he was no longer fit to govern.

After days of battling for his job, Johnson had been abandoned by all but a handful of allies after the latest in a series of scandals broke their willingness to support him. read more

Below are some of the scandals that have hurt Johnson politically:

Mass resignations from the government this week followed accusations by a senior former civil servant that Johnson’s office gave false information about past sexual harassment allegations against lawmaker Christopher Pincher.

In February, Johnson appointed Pincher deputy chief whip, giving him responsibility for the wellbeing of other Conservative lawmakers. Last week, Pincher was suspended from the party after acknowledging he had made other people uncomfortable during a drunken night out. It subsequently emerged that Pincher had been the subject of past sexual harassment allegations.

Johnson’s office initially said the prime minister had been unaware of specific past allegations against Pincher. However, on Monday, senior former civil servant Simon McDonald wrote a letter saying he had investigated the allegations in 2019 and had upheld the complaints.

The term “Partygate” was coined to refer to a scandal over parties held in government, including in Johnson’s own Downing Street office, which were found to have violated strict COVID-19 lockdown rules.

Johnson himself was fined by police for attending a birthday party, and was forced to apologise to Queen Elizabeth after it emerged staff had partied in Downing Street on the eve of her husband Prince Philip’s funeral in April 2021. She had been seated alone at the funeral because mixing indoors was banned.

A report by a senior civil servant gave a damning account on a series of illegal lockdown parties, detailing instances of staff’s excessive alcohol consumption and vomiting.

Parliament is still investigating whether Johnson misled lawmakers on repeated occasions when he denied being aware of illegal parties. Johnson says he sincerely believed at the time that gatherings did not break the law, but accepts now that he was mistaken.

Johnson’s Conservatives have been hit by other scandals of lawmakers accused of sexual improprieties, including two that led to lawmakers resigning. In both cases, the Conservatives lost special elections held last month to replace them.

Another Conservative lawmaker has been arrested on suspicion of rape, sexual assault and other offences. The lawmaker was bailed in May and has not been identified in the media to protect the identity of the alleged victim.

Last year, parliament’s standards committee recommended suspending Conservative lawmaker and former minister Owen Paterson for 30 days after finding he had committed an “egregious case of paid advocacy” by lobbying on behalf of companies that paid him. read more

The Conservatives initially voted in parliament to halt Paterson’s suspension and overhaul the process of investigating lawmakers. After damaging headlines, Paterson resigned and the government abandoned the proposed changes. The Conservatives lost the election to fill Paterson’s seat.

After a refurbishment of Johnson’s Downing Street flat – led by a celebrity designer and including gold wallpaper – Britain’s electoral commission fined the Conservatives 17,800 pounds for failing to accurately report a donation to pay for it.

Johnson’s ethics adviser later criticised the prime minister for failing to disclose some messages exchanged with the donor. However, he concluded that Johnson had not intentionally lied about the messages. read more

Whether you optimistically hope that mortgage rates will decline or are resigned that rates will stay elevated above the historic lows of 2021, you … END_OF_DOCUMENT_TOKEN_TO_BE_REPLACED

A resident of Nikopol, Ukraine, in her backyard last month, with smoke rising from an area on the opposite bank of the Dnipro River. Credit...David … END_OF_DOCUMENT_TOKEN_TO_BE_REPLACED