SINGAPORE—Myanmar authorities declared martial law in parts of Yangon after scores were killed and fires tore through several Chinese-owned garment factories, underscoring the threat to the nation’s fragile economy and tensions over China’s role in the country.

At least 37 people were killed on Sunday as authorities opened fire to disperse protests in two industrial suburbs of Yangon, Myanmar’s largest city, emergency responders said. At least 15 others were killed elsewhere, according to the Assistance Association for Political Prisoners, a nonprofit that monitors arrests and fatalities.

Sunday’s violence capped the deadliest weekend since Myanmar’s military seized power on Feb. 1, detaining civilian leaders, including Aung San Suu Kyi, and abruptly ending the country’s decadelong transition to democracy. The factories burned in the Yangon suburbs of Hlaing Tharyar and Shwe Pyithar, rattling one of the country’s most important export industries and drawing a rebuke from China.

The Chinese Embassy in Yangon condemned the attacks as “especially vile” and urged Myanmar authorities to stop the violence, punish perpetrators and protect Chinese businesses and personnel in the country. The embassy said multiple Chinese-backed factories were smashed up and set alight, while many Chinese nationals were injured. Most of the affected businesses were textile and clothing factories, it said.

“We urge the Myanmar people to express their demands in a lawful manner, and avoid being incited and exploited into damaging friendly cooperation between China and Myanmar,” the embassy said, adding that Chinese investment in the textile and garment sector has created nearly 400,000 jobs in Myanmar and some actions by citizens were hurting the economy.

Many opponents of the coup view China as supportive of the military and have criticized Beijing for its refusal to condemn the takeover or violence against protesters.

China’s response to the crisis has stood in contrast to that of the U.S. and other democracies. In the wake of the coup, many governments condemned the military’s power grab and called for the immediate restoration of Myanmar’s elected civilian government. Beijing cast it as an internal matter, and its foreign ministry said any action by the international community should “avoid aggravating conflicts and further complicating the situation.” Other Asian countries that invest heavily in Myanmar, such as Singapore and South Korea, have been more openly critical of the junta.

The United Nations Security Council unanimously condemned recent violence but has yet to take stronger action such as an arms embargo, in part because of opposition from permanent members China and Russia, both of which have veto power on the council and maintain significant strategic and economic interests in Myanmar.

Anti-Chinese sentiment hasn’t been a mainstream focus of the protests, but some in Myanmar have questioned China’s relationship with the junta and its silence over human-rights abuses. Social-media users have shared lists of companies said to be Chinese-owned, calling for boycotts. One widely shared image shows the words, “China get out from Burma,” referring to Myanmar by its former name, over the Chinese flag.

It couldn’t be determined who set the fires at the factories. Following Sunday’s violence, some in Myanmar welcomed the targeting of Chinese property. Others said the protesters weren’t involved, claiming that authorities ignited fires and blamed protesters in an effort to shore up Beijing’s backing for a harsher response.

Witnesses and medics said authorities began firing on protesters at around 1 p.m. A fire department official in one of the Yangon suburbs, Shwe Pyithar, said the department first received reports of the fires at about 3 p.m. The official said a security guard at one of the factories told firefighters that employees and others threatened guards at knife point before setting fire to the facility where they worked.

In interviews, residents of the affected Yangon suburbs said they are increasingly frustrated with Beijing.

Moe Sandar Myint, chairwoman of the Federation of General Workers Myanmar, said many of the garment workers her group represents have been threatened by Chinese employers over their participation in protests and civil-disobedience campaigns. She said the Chinese Embassy’s statement belied Beijing’s antagonism toward the demonstrators, calling for a strong response to the assault on Chinese property and workers but showing no sympathy for the Myanmar nationals who were killed.

“They don’t care about the people of Myanmar, they only care about their own interests in the country,” Ms. Moe Sandar Myint said.

A Buddhist monk who joined a protest in Hlaing Tharyar on Sunday said many people in Myanmar feel China, as a superpower with close ties to Myanmar, has a duty to protect them. “They’re a big neighbor and they see what’s going on, but they never intervene,” said the monk. “Instead, they support the military without doing anything.”

The destruction of Chinese apparel factories underscored the precarious state of the country’s garment sector. In recent years, Chinese factory owners made large investments in Myanmar’s clothing industry, accelerating its growth into a $5 billion export industry that employed around 700,000 people.

Around 40% of the country’s clothing factories have Chinese owners, according to Myanmar’s national garment association. The factories have helped meet Western demand for clothing from Myanmar, where low wages contribute to low production costs.

Hennes and Mauritz AB, a significant buyer of Myanmar clothing, said five of its suppliers’ factories were affected by the violence on Sunday, but declined to offer further details. “The situation is critical and our team in Yangon is working extensively to best manage the situation,” said an H&M spokeswoman.

The burning of the Chinese factories will likely contribute to brands’ wariness about sourcing from Myanmar.

H&M had said earlier this month that it had paused new orders from Myanmar, citing the practical difficulties and unpredictable situation. On Friday, Benetton Group, an Italian retailer, said it was following suit. The company cited safety issues and “violations of rights and freedom” for its decision.

Production has faced significant challenges since the coup, with work at some factories stopping as garment workers leave their sewing machines to join antimilitary protests. Logistics networks have been throttled. Shipping company A.P. Moeller-Maersk suspended activities at its warehouse and depots in Myanmar last week, citing the safety and security of employees. This week the company said that for warehouses and trucking operations, it is making assessments daily.

“Yesterday’s situation was very bad so I expect the worst for the garment industry,” said Aung Myo Hein, a Myanmar factory owner and an executive committee member of the national garment federation.

—Chun Han Wong in Hong Kong contributed to this article.

Write to Feliz Solomon at feliz.solomon@wsj.com and Jon Emont at jonathan.emont@wsj.com 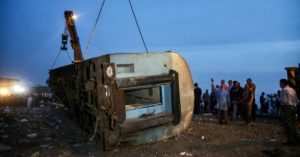 A passenger train derailed Sunday north of Cairo, killing at least 11 people and injuring scores more, the Egyptian authorities said. It was the … END_OF_DOCUMENT_TOKEN_TO_BE_REPLACED

French authorities will tightly restrict who can travel to France from Brazil, Argentina, Chile and South Africa, and will impose a 10-day quarantine … END_OF_DOCUMENT_TOKEN_TO_BE_REPLACED