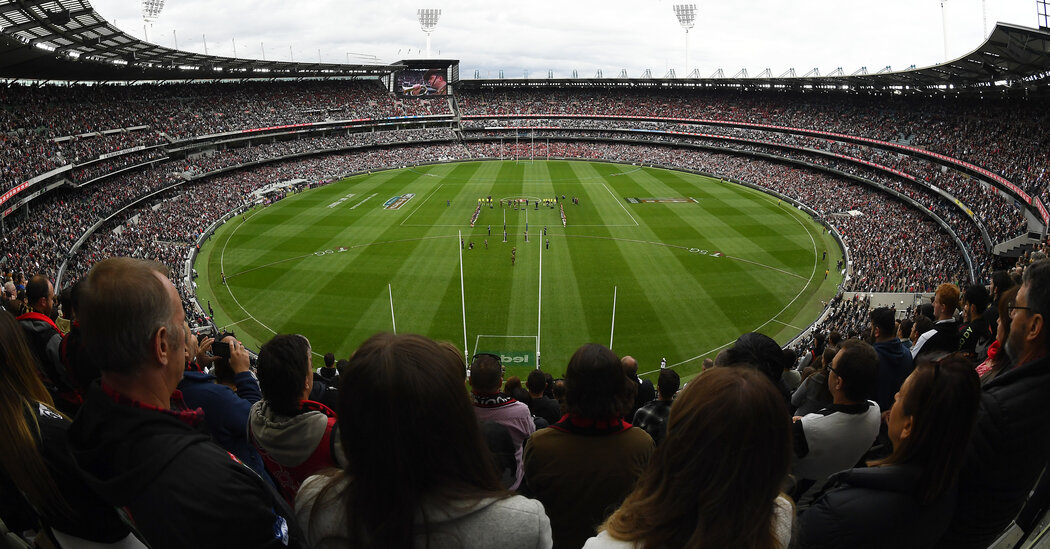 MELBOURNE, Australia — More than 78,000 people attended an Australian rules football match in Melbourne on Sunday night in what is believed to be the world’s biggest crowd at a sporting event since the coronavirus pandemic began.

The annual A.F.L. match between the Essendon and Collingwood teams is held on Anzac Day, which commemorates Australian and New Zealand soldiers, and includes a ceremony to honor the troops. It often draws the largest crowds of the season, sometimes even outselling the grand final match.

Just three days earlier, the government of the state of Victoria, of which Melbourne is the capital, had increased the attendance cap for the 100,000-capacity venue, the Melbourne Cricket Ground, to 85 percent from 75 percent. Three other Australian states have removed all limits on crowds at sporting events.

Last year, the match was canceled because of the pandemic and the Anzac Day ceremony was performed in an empty stadium.

baseball game hosted by the Texas Rangers, which was attended by about 38,000 people.

The A.F.L. match in Australia came a day after more than 50,000 fans packed into a stadium in Auckland, New Zealand, for what organizers said was the largest concert in the world since the pandemic began. The two countries, which have all but eliminated local transmission of the coronavirus, opened a travel bubble this month.

Both countries have responded to periodic outbreaks with immediate lockdowns, most recently in Perth, Australia’s fourth-largest city and the capital of Western Australia State, which went into a three-day lockdown on Saturday after a man tested positive for the virus after leaving hotel quarantine. So far, two related cases have been detected in the community.

The lockdown will end at midnight on Monday, but the state’s premier, Mark McGowan said some restrictions, like mandatory mask wearing and a limit of 20 people for gatherings, will remain for another four days. Citing the burden on the hotel quarantine system, he also said on Sunday that the state’s cap on the number of international air passengers allowed to arrive each week would be halved to 512 from April 29 to May 30, in another blow to the tens of thousands of Australians stranded overseas.

Whether you optimistically hope that mortgage rates will decline or are resigned that rates will stay elevated above the historic lows of 2021, you … END_OF_DOCUMENT_TOKEN_TO_BE_REPLACED

A resident of Nikopol, Ukraine, in her backyard last month, with smoke rising from an area on the opposite bank of the Dnipro River. Credit...David … END_OF_DOCUMENT_TOKEN_TO_BE_REPLACED