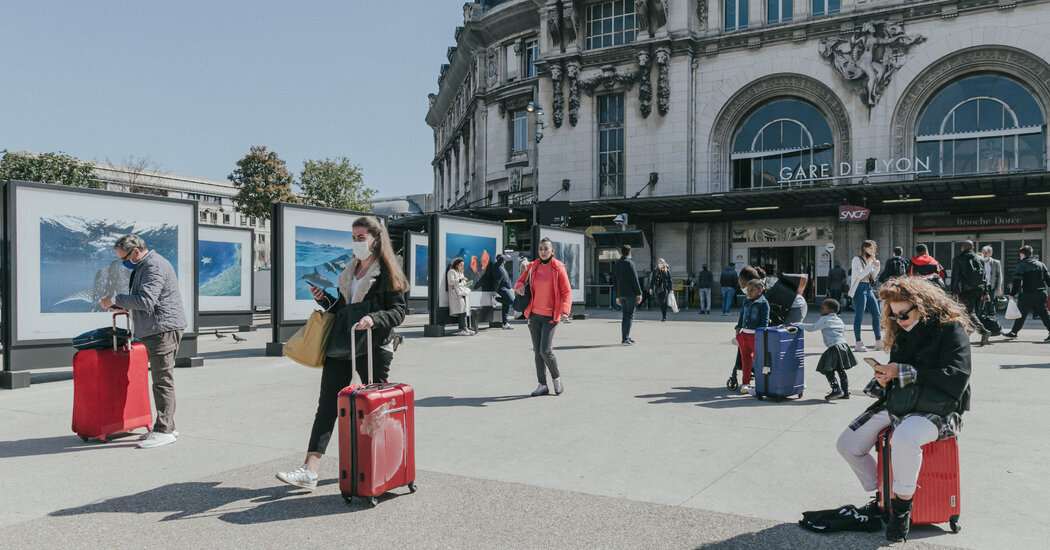 PARIS — At the Montparnasse train station in Paris, the contrast couldn’t have been sharper.

About a year ago, faced with the first national lockdown against a raging coronavirus epidemic, Parisians desperately jammed into trains in an exodus that turned Montparnasse into a place of fear and anxiety, and the capital into a ghost town.

But on Friday morning, a day before the start of the third national lockdown, foot traffic was relatively light inside Montparnasse station and others in Paris. The mood was one of deep fatigue ahead of restrictions that, once again, will severely limit travel across France, confine people’s movements in their communities and shut down schools.

“There is a bit of weariness,” said Muriel Sallandre, who was catching a train to visit her parents in western France but was planning to return to Paris in a few days. “The absence of perspective, being dependent on the government’s messages — all that is ultimately a little depressing.”

Many French rushed to buy train tickets immediately after the announcement of a new lockdown on Wednesday evening. So the capital’s stations will likely get more crowded over the weekend, as travelers planning to spend the latest lockdown outside Paris mix with those traveling to visit relatives for Easter. Some Parisians also left the capital after restrictions were imposed in the capital region a couple of weeks ago.

announced yet another national lockdown after months of resisting advice from epidemiologists and pressure from political rivals. Mr. Macron had bet unsuccessfully that, despite rising infections and new powerful variants, a national lockdown could be avoided if enough people got vaccinated at a steady pace.

AstraZeneca, which ran into production shortages and said its contracts required it to fulfill orders to Britain first.

Its vaccine, which France and other European countries bet heavily on to lead them out of the pandemic, has also been plagued by worries about rare but sometimes fatal side effects that led them briefly to suspend its use. Some nations are still not giving it out or are restricting who gets it.

Among the French, the mood has grown darker as other nations, especially Britain and the United States, have bounced back from a disastrous handling of the epidemic with successful inoculation campaigns. Just 13 percent of France’s population has had at least one vaccine shot, compared to 47 percent of Britons and 30 percent of Americans.

poll released Thursday showed that a majority of French people were skeptical of the new lockdown’s ultimate effects. In findings that reflected the population’s fatigue, 70 percent of French respondents said they approved of the new national lockdown, but 46 percent said that they planned to flout the measures.

opened psychological wounds and left them in deep economic uncertainty, two-thirds of those surveyed said they would break the new rules.

In a country that is acutely sensitive to its rank in the global pecking order, France’s frequent mishandling of the epidemic and subsequent vaccination campaign has led to widespread hand-wringing. Last year, France found itself dependent on China and other nations for the masks, test kits and other basic tools to fight the outbreak.

This time, the country finds itself entirely dependent on outside help for its vaccines — a crushing blow to the nation that produced Louis Pasteur and enjoys a long history of medical breakthroughs.

China and Russia have deployed their own vaccines in their quest for global influence, France has been relegated to the position of bystander.

In late January, the Pasteur Institute announced that it would abandon research on its vaccine candidate after disappointing trial results, just a month after Sanofi, France’s biggest pharmaceutical company, said that its own vaccine was unlikely to be ready before the end of 2021, at best.

“It’s a sign of decline of the country and this decline is unacceptable,” François Bayrou, recently named commissioner for long-term government planning by Mr. Macron, said in a radio interview in January.

The problems with the vaccines have left many French of all age groups deeply skeptical and pessimistic.

“I’m still waiting to see, but I think that believing in a return to normal is an illusion,’’ said Victor Cormier, 22, a student.

Andrée Girard, 61, a retiree, said she had been unable to book an appointment to get vaccinated. She didn’t believe the new restrictions would curb the epidemic for good and feared that France was stuck in a “stop and go” pattern for the foreseeable future.

Referring to Mr. Macron’s pledge in his Wednesday announcement that France would start reopening in mid-May, Ms. Girard said, “I’m skeptical about a light at the end of the tunnel. They’ve been making promises for the past year that haven’t been kept.’’

AUSTIN, Texas--(BUSINESS WIRE)--As the first multifamily management company to be recognized in the Public Relations and Marketing Excellence Awards, … END_OF_DOCUMENT_TOKEN_TO_BE_REPLACED

There have been whispers of cooling housing and rental prices in the San Francisco Bay Area, but that hasn't yet translated into practical, noticeable … END_OF_DOCUMENT_TOKEN_TO_BE_REPLACED

Cars pass in Independence Square at twilight in Kyiv, Ukraine, Monday, Oct. 31, 2022. Rolling ... [+] blackouts are increasing across Ukraine as the … END_OF_DOCUMENT_TOKEN_TO_BE_REPLACED