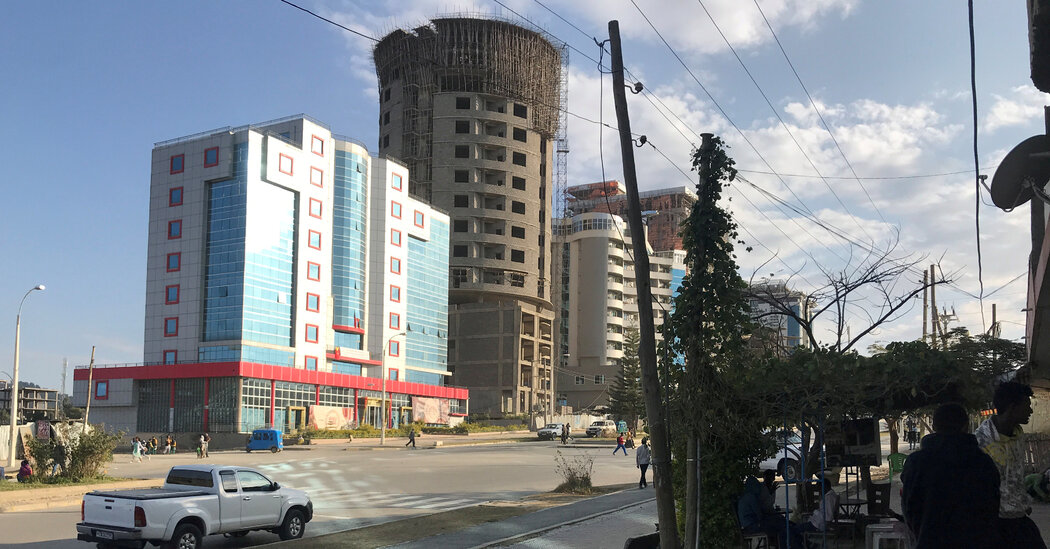 The calm is deceptive.

A stubbled crater attests to a recent artillery barrage, but with its bustling streets and shops, the highland Ethiopian city of Mekelle has an air of relative peace.

Then the stories start spilling out.

Of the hospital that begins its days with an influx of bodies bearing gunshot or knife wounds — people killed, relatives and Red Cross workers say, for breaching the nightly curfew.

Of the young man who made the mistake of getting into a heated argument with a government soldier in a bar. Hours later, friends said, four soldiers followed him home and beat him to death with beer bottles.

Of a nightlong battle between government forces and local militia fighters in a nearby town and its aftermath, when soldiers returning to collect their dead stormed into nearby homes, firing indiscriminately.

obtained by The New York Times.

A spokesman for the Ahmara regional government told Bloomberg this week that it was pressing to officially incorporate western Tigray into Amhara.

an investigation was approved by the U.N.’s Office of the High Commissioner for Human Rights

In testimony to Congress last week, the United States secretary of state, Antony J. Blinken, called the situation in Tigray unacceptable and reiterated calls for Eritrean troops to withdraw immediately.

“They need to come out,” Mr. Blinken said.

Mr. Mulu, the interim leader of Tigray, cuts a lonely figure in Mekelle. An ethnic Tigrayan installed by Mr. Abiy nine days into the war, he lives and works from a suite at the Axum Hotel where he is trying to trying to restart Tigray’s war-battered bureaucracy.

Unlike Mr. Abiy, Mr. Mulu does not deny the Eritrean presence in Tigray. And in an interview he said he had initiated his own investigation into reported atrocities.

“It’s not acceptable that people should die like this,” he said. “But we need evidence. We have requested our security forces to investigate it.”

Tigray’s health services, once among the best in Ethiopia, have been ravaged. On Monday, Doctors Without Borders said that dozens of clinics across the region had been destroyed and plundered by soldiers, often deliberately.

quit his job over the reports of atrocities in Tigray, accusing Mr. Abiy of leading Ethiopia “down a dark path toward destruction and disintegration.”

Inside Tigray, soldiers detained Ethiopian translators and reporters working for four international outlets, including The Times, last month. The men were released without charge days later, but by then most foreign reporters had been forced to leave Tigray.

In such a fraught environment, even massacres are contested.

Mr. Abiy’s officials frequently cite a massacre in Mai Kadra, a town in western Tigray, on Nov. 9, as an example of T.P.L.F. war crimes. Witnesses cited in an Amnesty International report blamed the deaths on Tigrayan fighters.

with a reputation for brutality, and insisted that the majority of victims were Tigrayans.

Solomon Haileselassie, 28, said he watched the slaughter from his hiding place in a garbage dump. “I saw them cut off people’s legs and arms with axes,” he said.

Fisseha Tekle, Amnesty International’s Horn of Africa researcher, said the group had received credible new evidence of Tigrayan deaths, but stood by the finding that the majority of victims were Amharas.

Restricted access and the “high politicization of violence” make it hard to establish the truth about much of anything in Tigray, Mr. Fisseha added.

An employee of The New York Times contributed reporting from Mekelle, Ethiopia.

MIAMI--(BUSINESS WIRE)--Intelli Smart Homes, the leading smart home technology company, has been recognized as one of America’s fastest-growing … END_OF_DOCUMENT_TOKEN_TO_BE_REPLACED

Customers outside a Walmart store in Torrance, California, US, on Sunday, May 15, 2022. Walmart Inc. is scheduled to release earnings figures on May … END_OF_DOCUMENT_TOKEN_TO_BE_REPLACED

The past few years have been brutal on homebuyers' budgets. Would-be buyers have been priced out of some of the most desirable neighborhoods thanks to … END_OF_DOCUMENT_TOKEN_TO_BE_REPLACED