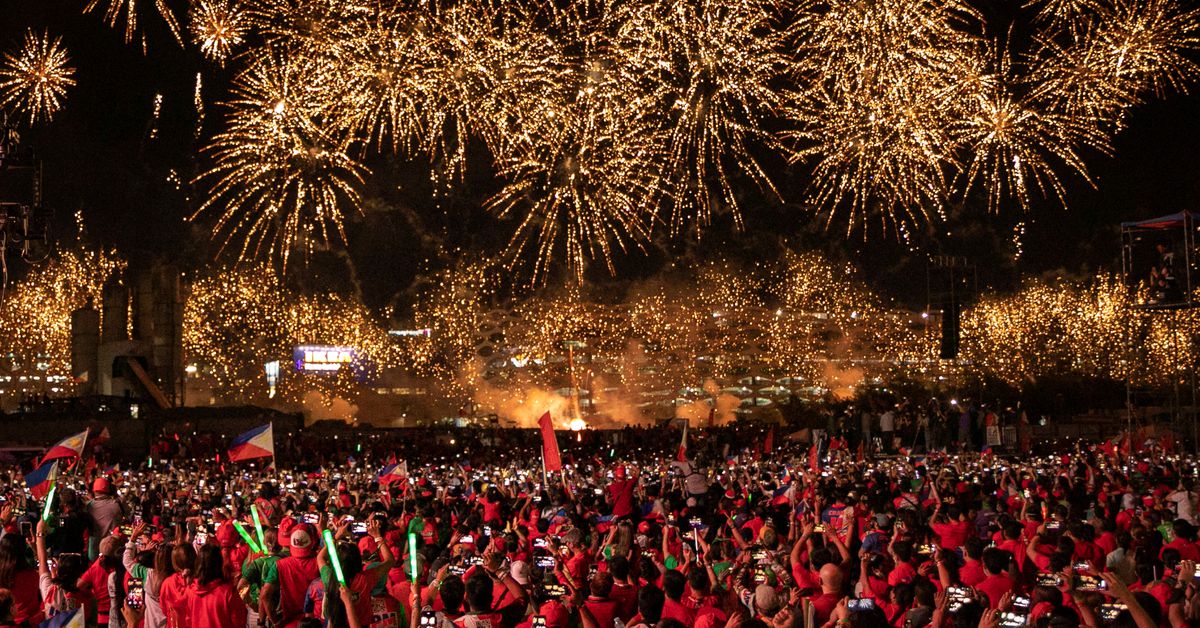 MANILA, May 7 (Reuters) – Crowds of hundreds of thousands massed in the Philippines on Saturday where the leading presidential candidates made a last-ditch bid to sway undecided voters with patriotic, upbeat messages after a divisive election race.

Fireworks lit up the sky as singers, celebrities and social media stars took to stages across the capital Manila ahead of the election on Monday, which pits Vice President Leni Robredo against frontrunner Ferdinand Marcos Jr, the son of the notorious late dictator who ruled the Philippines for 20 years. read more

If opinion surveys are accurate, Robredo, 57, will need a late surge, or low turnout to win the presidency, with Marcos, a former congressman and senator, leading her by over 30 percentage points, having topped every poll this year. read more

The two embody a political chasm that has existed more than four decades, with Robredo’s roots in the movement that led a 1986 “people power” uprising that toppled the elder Marcos, and Marcos Jr on the cusp of an almost unthinkable return for the once disgraced first family.

Marcos cast his campaign as a chance to bridge that divide.

“We will reach the day that when we join forces, when we again face the world and shout to our friends and wave our flag, we will be proud to say we are Filipinos,” Marcos told a roaring red-shirted crowd that waved national flags.

Opponents of Marcos say the presidency is the endgame in a years-long effort to change historical narratives of authoritarianism and plunder that have dogged his family, which despite its fall from grace remains one of the wealthiest and most influential in Philippine politics.

Marcos Jr has been criticised for his lack of a policy platform and for dodging debates and media appearances, a strategy that has minimised scrutiny and allowed him to generate support on social media among voters born long after his father’s rule.

Monday will be a rematch of the 2016 vice presidential election which Marcos looked set to win, before losing by just 200,000 votes to Robredo. He alleged cheating and fought hard to overturn the result, which the Supreme Court upheld. read more

“This fight is not about one person or candidate. I am just a vehicle of the love that engulfs Filipinos,” Robredo told hundreds of thousands of supporters at a rally that turned swathes of the city’s business district pink, her campaign colour.

If the election reflects the opinion polls, Marcos, 64, could be the first Philippines president to be elected with a majority vote since the end of his father’s rule.

“I am so happy because he’s close to taking office as the next president. I am sure of that, as long as there’s no cheating,” said Marcos supporter Emma Montes, 43, a household helper, after attending Marcos’ rally.

About 65 million Filipinos are eligible to cast ballots on Monday to decide on the successor to President Rodrigo Duterte after six years in power, plus thousands of other posts, from lawmakers and governors to city mayors and councillors.

Christian Dave Palero, 22, a call centre agent dressed in a pink jacket, said he still believed Robredo had a chance to triumph.

“We’re exhausted but we’re happy and fulfilled,” he said. “We are confident Leni can win.”

SEATTLE--(BUSINESS WIRE)--(NASDAQ: RDFN) —The housing market turned a corner in April as the inventory crunch showed signs of easing, according to a … END_OF_DOCUMENT_TOKEN_TO_BE_REPLACED

We present a chance to live like Rocky Mountain royalty right in the heart of Denver. “You don't see a lot of castles in the middle of Denver—and this … END_OF_DOCUMENT_TOKEN_TO_BE_REPLACED