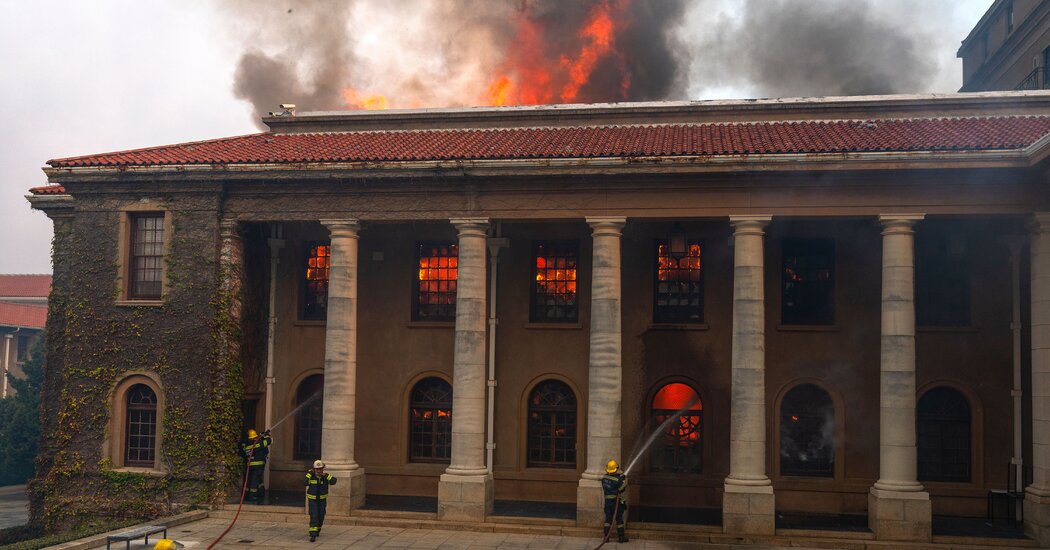 JOHANNESBURG, South Africa — Firefighters in Cape Town on Monday were battling a wildfire that had engulfed the slopes of the city’s famed Table Mountain and destroyed parts of the University of Cape Town’s archival library.

Helicopters dumped water on the area in an effort to contain the blaze, which began on Sunday and was most likely caused by an abandoned campfire, according to South African National Parks officials. But as wind picked up strength overnight — fanning the flames — the fire spread to neighborhoods in the foothills of the mountain and forced some homes to be evacuated on Monday morning.

in a statement, “The wind speed is expected to increase during the day which may impact on the deployment of aerial firefighting.”

according to university officials. The reading room housed parts of the university’s African Studies Collection — which includes works on Africa and South Africa printed before 1925, hard-to-find volumes in European and African languages, and other rare books — as well as a treasured film archive, according to Niklas Zimmer, a library manager at the university.

in a statement, “Some of our valuable collections have been lost, however a full assessment can only be done once the building has been declared safe.”

After all, Lonely Planet, which was founded by Tony Wheeler with his wife, Maureen, was itself named by mistake. Mr. Wheeler thought he was adopting … END_OF_DOCUMENT_TOKEN_TO_BE_REPLACED

In 2012, the NGO Committee on Spirituality, Values and Global Concerns recognized her efforts, awarding her its “Spirit of the U.N.” award.Influenced … END_OF_DOCUMENT_TOKEN_TO_BE_REPLACED

BUCHAREST, Romania — The apparent killing of a large brown bear in Romania by a member of the Liechtenstein royal family has set off a wave of anger … END_OF_DOCUMENT_TOKEN_TO_BE_REPLACED