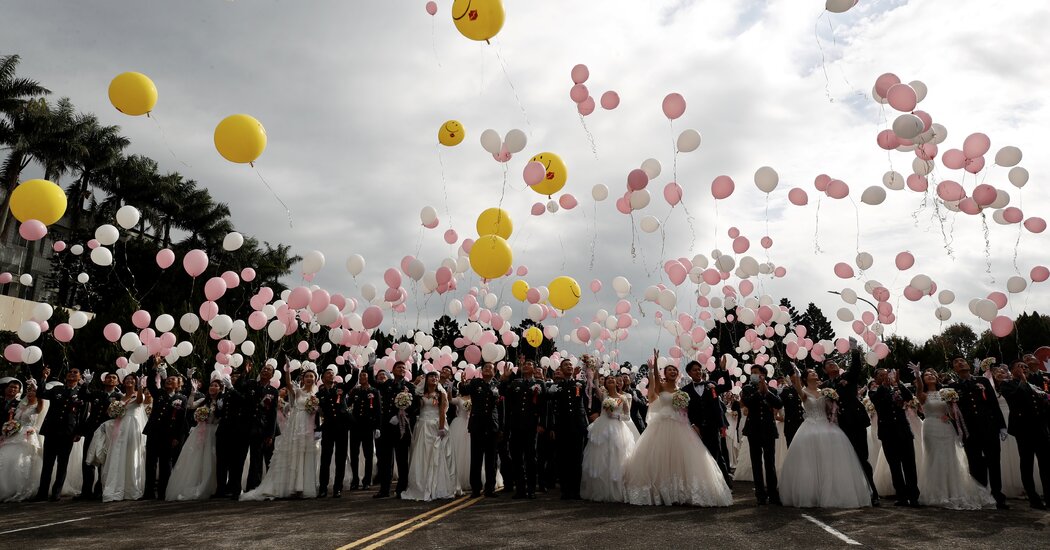 In Taiwan, one of the few places in the world to offer marriage leave to couples heading to the altar, a bank employee married his partner on April 6, 2020.

They got divorced days later, on April 16.

Then they remarried the following day.

Another divorce and a third marriage followed on April 28 and April 29.

After a third divorce, on May 11, they got married for the fourth time, on May 12.

It was all a plot to take advantage of the self-governing island’s time-off policy for couples who get married — eight days of leave — the man’s employer, a bank in Taipei, said in public records.

The bank refused to approve the man’s application for paid time off beyond the mandated eight days for his first marriage. That prompted him to lodge a complaint with the Labor Department for violations of leave entitlements. The bank was fined $700 last October, but appealed the penalty in February, claiming that the employee had abused his rights.

Facebook last week. “The law exists for the people and not for exploitation, profit or harm. Of course it is important to enforce the law, but not knowing when to be flexible is the real disaster!” she added.

The case has also thrown the labor authorities in Taipei, the capital, into disarray and raised questions about how easy it is to exploit the marriage leave policy. In a statement, Ms. Chen, the labor official, called on public servants not to lose sight of common sense.

“Even though my colleagues had seriously studied the labor laws, they had not reached a breakthrough as to whether the bank employee abused his rights.” Ms. Chen added, “Instead, they had been digging into the black hole of ‘whether the marriage was real.’”

Marriage leave was introduced in Taiwan as part of other employment benefits, such as public holidays and paid time off for illness and bereavement, when the island’s labor laws were established in 1984, according to Chiou Jiunn-yann, a professor specializing in labor law at the Chinese Culture University in Taiwan.

Malta provides two working days. Vietnam allows three days for one’s own marriage and one day for the wedding of a child. In China, the duration of leave varies by region: Most offer at least three days, but Shanxi Province allows 30 days.

The Taiwanese marriage leave does not impose quotas on those who claim it, nor does it restrict how frequently employees could take the leave. The entitlement is simply renewed for each marriage, even for those marrying each other repeatedly. (In comparison to the marriage leave, workers get five days of parental leave.)

“The worker is entitled to leave if he remarries,” said Chen Kun-Hung, the chief labor standards official in the Taipei City government.

The penalty slapped on the bank was revoked after the case was covered by local news outlets, spurring public debate, he added. “The public thought there was concern over the abuse of labor rights, and the abuse hasn’t been regulated in laws or discussed by the central government to clarify the situation,” he said in a phone interview on Thursday.

Professor Chiou added that the government should consider appropriate measures to ensure fairness to both employers and employees.

“If there’s no plan to resolve this, there’s no guarantee that there wouldn’t be someone who plays this kind of game with you 365 days a year,” he said.

AUSTIN, Texas--(BUSINESS WIRE)--As the first multifamily management company to be recognized in the Public Relations and Marketing Excellence Awards, … END_OF_DOCUMENT_TOKEN_TO_BE_REPLACED

There have been whispers of cooling housing and rental prices in the San Francisco Bay Area, but that hasn't yet translated into practical, noticeable … END_OF_DOCUMENT_TOKEN_TO_BE_REPLACED

Cars pass in Independence Square at twilight in Kyiv, Ukraine, Monday, Oct. 31, 2022. Rolling ... [+] blackouts are increasing across Ukraine as the … END_OF_DOCUMENT_TOKEN_TO_BE_REPLACED