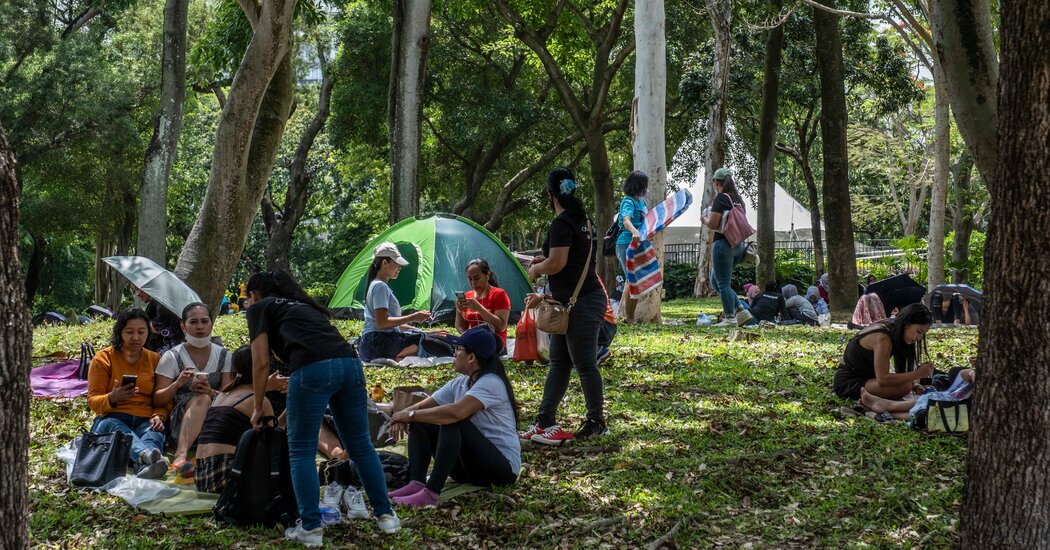 HONG KONG — The noodle shop was doing a brisk Friday evening business, with diners crowded at shared tables. Eni Lestari, a migrant domestic worker in Hong Kong, spotted a seat near another woman and hurried to claim it.

Suddenly, the woman stood, and, according to Ms. Lestari, declared that she would not sit near her.

She did not give a reason. But hours earlier, the Hong Kong government had ordered virtually all of the city’s 370,000 migrant domestic workers — mostly Southeast Asian women in an otherwise largely racially homogeneous city — to take coronavirus tests and vaccines. Officials said they were “high risk” for infection, because of their habit of “mingling” with other migrant workers.

“They don’t think about us as humans who also have a social life,” said Ms. Lestari, who came to Hong Kong from Indonesia 20 years ago. “The frustration and anger of the Hong Kong public during Covid-19 — now it’s directed at the domestic workers.”

exposed the plight of migrant and other low-paid workers, whose labor undergirds local economies but is often unrecognized or exploited. Hong Kong has one of the world’s highest densities of migrant domestic workers, who make up about 10 percent of the working population.

In the pandemic, government officials and employers have invoked public health to impose more restrictions.

Domestic workers — euphemistically called “helpers” — have described being barred from leaving their employers’ homes on their day off, in the name of preventing infection. Those who can leave say they are harassed by the police and passers-by. The government has repeatedly accused the workers of violating social distancing restrictions, though other groups, including expatriates and wealthy locals, have been at the heart of the city’s major outbreaks.

Officials singled out domestic workers with their first, and only, vaccination order. The requirement did not apply to the workers’ employers, with whom they are in daily contact.

is high across Hong Kong, Law Chi-kwong, the city’s labor secretary, said in a news conference that the workers were in a “different situation” than locals. If they did not want to get vaccinated, he added, “they can leave Hong Kong.”

Workers denounced the announcement as racist. Officials from the Philippines and Indonesia — Hong Kong’s primary sources of migrant labor — objected. A few days later, Carrie Lam, Hong Kong’s chief executive, withdrew the vaccination requirement, though she maintained the only consideration had been public health.

But the testing requirement remained — and last week, Mrs. Lam ordered a second round, even though the first had yielded just three positive cases.

“What is the scientific basis?” said Dolores Balladares, a Filipina worker and spokeswoman for Asian Migrants Coordinating Body, an advocacy group. “Are they not fed up with thinking that migrant domestic workers are virus carriers?”

proposed locking down workers on their day off. She did not propose any restrictions during the week, when they often buy groceries and run other errands.

Mr. Law, the labor secretary, rejected that proposal at the time, noting that the infection rate among domestic workers was half of the rate in the general public.

Maricel Jaime, a Filipina worker who has been in Hong Kong for six years, said she had come to expect constant supervision on Sundays, when most domestic workers are off. During Christmas, she and her friends were careful to gather in small groups and to maintain distance. Still, whenever they briefly got close — to pass around food, or to retrieve something from a bag — officers hurried over to chastise them, she said.

“The police are around us, always checking. Even if we are following the rules, the police are still hassling us,” Ms. Jaime said.

Puja Kapai, a law professor at the University of Hong Kong who studies ethnic minorities’ rights.

immediately denied that the rule was discriminatory. (He had, however, previously said that restricting access to restaurants by vaccination status could be discriminatory.)

Despite the attention that the pandemic has brought to the difficulties faced by migrant workers, Professor Kapai said she doubted that governments would embrace reform. Hong Kong’s economy has been battered by the outbreak, making pay raises for domestic workers unlikely, and few local residents have spoken out in the workers’ defense.

“I don’t think there is much of an incentive for the Hong Kong government to do anything differently,” she said.

Still, some workers are trying to create change.

Ms. Jaime, who is also a leader in a union for domestic workers, said she spends her Sundays trying to inform other workers of their rights — while complying with social distancing rules.

“I have fear to go outside because of Covid,” she said. “But I have so much fear that this kind of discrimination will get worse and worse.”

It’s a property that offers a unique open floor plan—plus a hot tub with a view.“It was a Methodist church located in a historic little area of St. … END_OF_DOCUMENT_TOKEN_TO_BE_REPLACED