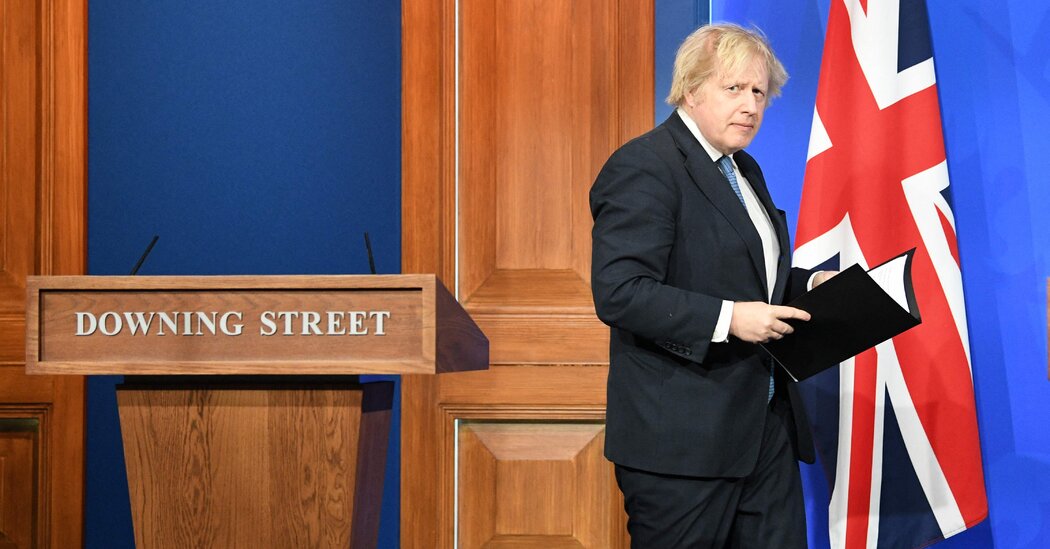 LONDON — Prime Minister Boris Johnson has long had a weakness for a funny line, even in the face of an unfunny problem like the pandemic. When coronavirus cases first spiked last spring, he promised that a lockdown would “squash the sombrero.” When he spoke to businesspeople about an emergency plan to manufacture ventilators, he joked that it could be called “Operation Last Gasp.”

Now, Mr. Johnson stands accused of something darker: declaring at a tense meeting last fall that he would not bow to pressure to impose yet another lockdown, even if it meant letting “the bodies pile high in their thousands.”

He has denied the claim, made by anonymous sources to multiple British newspapers. But the papers, as well as the BBC, are not backing down from their reporting. The dispute has called into question not just Mr. Johnson’s credibility, which is regularly in doubt, but also his humanity, which is usually not.

pay for the costly refurbishment of his Downing Street home, and of trying to shut down an investigation of who leaked plans for a lockdown when it became clear that the probable leaker was a friend of his fiancée, Carrie Symonds.

“Boris Johnson has a serious problem with Cummings going rogue because everything we know about Dominic Cummings is that he is a loose cannon,” said Matthew Goodwin, a professor of politics at the University of Kent and an expert on the British right. “You don’t want him in the opposition camp.”

While the backbiting and knife fighting have riveted Britain’s political class, some analysts question whether it resonates much beyond the hothouse precincts of Westminster. Britons, they say, are more swayed by their country’s robust vaccine rollout and their ability to buy a pint at the pub after a year of grinding lockdowns. Plus, after decades on the political stage, Mr. Johnson’s foibles are hardly new.

As Mr. Goodwin put it, “The fact that he is seen as a bit of a clown and a bit of a buffoon is priced in.”

when he and his family violated proscriptions against leaving home during the first lockdown and traveled hundreds of miles from London to Durham, an incident that corroded the public’s faith in the coronavirus rules.

Mr. Johnson stood by his adviser, but Mr. Cummings was forced out several months later after losing an internal struggle, and the rift between the two men now seems bitterly personal. Mr. Johnson is reported to have called newspaper editors himself last week to accuse his former aide of leaks about the government.

build a narrative of sleazy dealings, cronyism and lying that inflicts real damage on a government that has overcome its succession of mistakes in its handling of the pandemic, largely thanks to the vaccine rollout.

Though Mr. Johnson became prime minister less than two years ago, his Conservative Party has been in power since 2010. Analysts pointed to an earlier era when, having been in power for more than a decade, the Conservative government of Prime Minister John Major was ground down by scandals and crises.

“There is a warning from history, from the 1990s, when the government failed to contain repeated allegations of sleaze,” Mr. Goodwin said, noting that it set up the Labour Party for its largest victory in recent history.

Some analysts predicted the public would be forgiving of Mr. Johnson’s outburst about the lockdown because they, too, found the repeated restrictions burdensome and because no one believes he would actually welcome thousands of deaths. They would also take into account his own ordeal with the virus and his decision to order another severe lockdown after Christmas.

“People can be cross because they are tired,” said Andrew Gimson, one of Mr. Johnson’s biographers. “He was exhausted and he’d been through a near-fatal illness, from which he had not fully recovered when he made that remark.”

Others, however, predicted that the flap over Mr. Johnson’s refurbishment of his apartment would throw a harsh spotlight on his sense of impunity, lack of transparency and unwillingness to make do with the perks offered a prime minister.

Mr. Johnson already has access to an annual public grant of £30,000 ($41,600) to upgrade his quarters. Newspaper reports say he augmented that with funds from a Conservative Party donor because Ms. Symonds wanted to get rid of the furniture used by his predecessor, Theresa May, which had been described as being in the style of the British department store, John Lewis.

The government insists Mr. Johnson paid for the upgrade out of his own pocket, though it is unclear whether he repaid money from the donor. However it was financed, the couple’s apparent disdain for John Lewis-style décor may sit badly with ordinary people, for whom the store is a symbol of bourgeois prosperity.

“Johnson has always stayed one step ahead of the sheriff,” Mr. Powell said. “But at some stage in No. 10, you can’t get away with lies that can be proven to be lies.”

Three men were indicted in the death of the notorious gangster James (Whitey) Bulger, who was beaten to death four years ago in a West Virginia … END_OF_DOCUMENT_TOKEN_TO_BE_REPLACED

Dr. Connolly and Dr. Mott live in the North Baltimore neighborhood of Homeland, known for its strong public schools and colonial architecture, which … END_OF_DOCUMENT_TOKEN_TO_BE_REPLACED