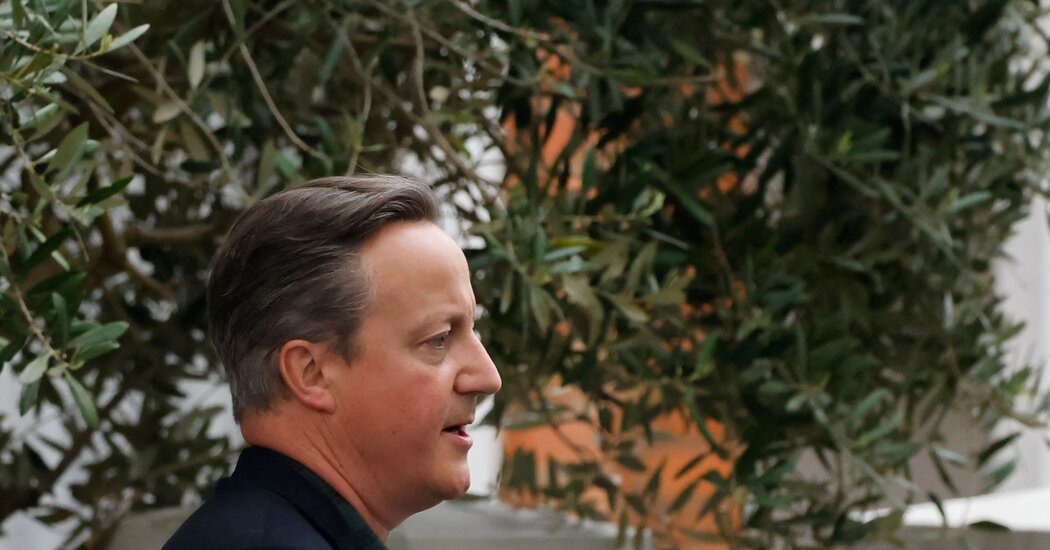 LONDON — Not many former British prime ministers adapt easily to life after 10 Downing Street or gain the respect afforded to some ex-leaders around the world.

But few have fallen as far and as fast as David Cameron, who on Thursday made his first public appearance since a lobbying scandal cast a harsh light on his character and judgment, as well as the shifting morals of British public life.

Mr. Cameron’s embarrassment is particularly surprising because more than a decade ago and before becoming prime minister, he himself had warned that a crisis over lobbying was the “next big scandal waiting to happen” following an outcry over lawmakers’ expenses.

“We all know how it works,” Mr. Cameron said in a speech in 2010. “The lunches, the hospitality, the quiet word in your ear, the ex-ministers and ex-advisers for hire, helping big business find the right way to get its way.”

as did Greensill Capital, whose financial difficulties endangered thousands of jobs, prompting a series of inquiries.

During Thursday’s hearing, Mr. Cameron kept his cool and rejected as “absurd” reports that he stood to make tens of millions of dollars from options on Greensill shares. Refusing to give details, he nonetheless conceded that he had a “serious economic interest” in its success, was paid “generously” and earned more than his previous salary as prime minister. Nor did he deny using the company’s private jet to fly to his vacation home in Cornwall.

The release of messages earlier this week revealed the extent to which the ex-prime minister, who resigned in 2016, was willing to ingratiate himself with former staff and colleagues — including one with whom he had fallen out spectacularly a few years earlier.

“I know you are manically busy — and doing a great job,” wrote Mr. Cameron to Michael Gove, a senior cabinet minister, in one text stressing that he was “on this number and v free.”

and wrote: “As for Michael, one quality shone through: disloyalty.”

In the messages sent last year, Mr. Cameron also told the chancellor of the Exchequer, Rishi Sunak, he was “doing a great job” — and made sure that senior officials knew about his contacts with Mr. Sunak.

“See you with Rishi’s for an elbow bump or foot tap. Love Dc,” Mr. Cameron signed off one message to Tom Scholar, the most senior civil servant at the Treasury.

in the right-leaning Daily Telegraph. She seemed to be referring to allegations Prime Minister Boris Johnson broke electoral rules in the underhanded way he was said to have financed a pricey refurbishment of his apartment.

Mr. Cameron resigned after taking the fatal gamble that he could persuade Britons to vote against Brexit in the 2016 referendum, leaving himself unexpectedly out of a job.

American intelligence agencies say ordered the killing. In a statement made in April, Mr. Cameron insisted that he took the opportunity to raise human rights issues.

On Thursday, Mr. Cameron explained his barrage of texts as a consequence of the urgency of the situation but conceded that, with hindsight, he should have made his approaches by formal letters or emails. He believed Greensill was offering good ideas to the government, Mr. Cameron said, denying that his lobbying was motivated by his financial interest.

Greensill pitched itself as an intermediary between the government and payees, offering to accelerate payments to businesses and individuals. In the case of individuals, Mr. Cameron defended the practice as a sort of populist alternative for some people to usurious payday-lending schemes. But the bulk of the lending was aimed at companies doing business with the government, and critics always questioned the wisdom of using an outside finance firm rather than simply speeding up government payments.

Professor Bale said that it was hard to think of any similarly overt lobbying of ministers from a former prime minister, not even Tony Blair, who was much criticized for his consultancy work.

“It is illustrative of a decline in standards because it used to be the case that this kind of thing ‘wasn’t done’ — and now it is,” Professor Bale said. The silver lining, he added, was that “the embarrassment caused to David Cameron might put some of his successors off.”

AUSTIN, Texas--(BUSINESS WIRE)--As the first multifamily management company to be recognized in the Public Relations and Marketing Excellence Awards, … END_OF_DOCUMENT_TOKEN_TO_BE_REPLACED

There have been whispers of cooling housing and rental prices in the San Francisco Bay Area, but that hasn't yet translated into practical, noticeable … END_OF_DOCUMENT_TOKEN_TO_BE_REPLACED

Cars pass in Independence Square at twilight in Kyiv, Ukraine, Monday, Oct. 31, 2022. Rolling ... [+] blackouts are increasing across Ukraine as the … END_OF_DOCUMENT_TOKEN_TO_BE_REPLACED