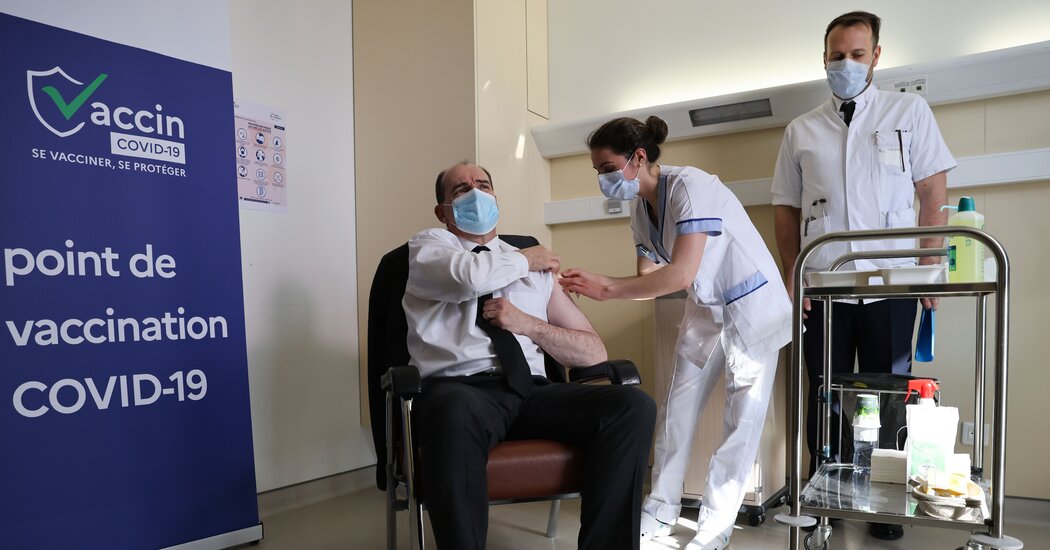 France resumed administering the AstraZeneca vaccine on Friday, but only to people aged 55 and above, as the country’s prime minister himself got a shot live on television to restore crucial trust in the jab.

The Haute Autorité de Santé, France’s top health regulator, officially gave its green light to resuming AstraZeneca vaccinations on Friday “without delay.” But noting that the rare cases of blood clotting disorders recorded around Europe had occurred among people younger than 55, it recommended using the vaccine only for people older than that.

Jean Castex, the country’s 55-year-old prime minister, flashed a thumbs up at television cameras after getting his first dose of the AstraZeneca vaccine at a military hospital in the Val-de-Marne area, southeast of Paris.

Unlike leaders in other countries, top government officials in France had thus far been reluctant to promote vaccination by getting their shots in public, many of them arguing that they did not fit the criteria currently defined by French health authorities and that they would wait for their turn.

trust in the AstraZeneca vaccine was badly shaken after several countries, including Germany, Italy and France, temporarily suspended its use over worries about rare cases of blood clotting disorders among those who had gotten the shot.

France has been experiencing a sharp rise in coronavirus cases, jumping 24 percent in just a week. The variant first identified in Britain now represents three-quarters of new cases, and several regions, including the hard-hit area that includes Paris, began a new lockdown on Friday that will last for at least a month.

Last week, health officials in Paris ordered hospitals to cancel many of their procedures to make room for Covid-19 patients. And this week some patients were transferred to other regions to ease the pressure on hospitals.

The health regulator said that France had only recorded three cases of clotting disorders after administering 1.4 million AstraZeneca doses: one involving a 26-year-old woman who experienced disseminated intravascular coagulation; and two cases of cerebrovascular thrombosis, one in a 51-year-old man and the other in a 24-year-old woman.

Until “complementary data” was available on these rare cases, messenger RNA vaccines like the Pfizer one should be used for people younger than 55, the regulator said.

On a landlocked street corner at the entrance to the South Street Seaport stands a shabby, rust-streaked old lighthouse, its lantern dark, dwarfed by … END_OF_DOCUMENT_TOKEN_TO_BE_REPLACED

Kohl's announced Friday that it is terminating talks to sell its business, saying that retail environment has significantly deteriorated since the … END_OF_DOCUMENT_TOKEN_TO_BE_REPLACED