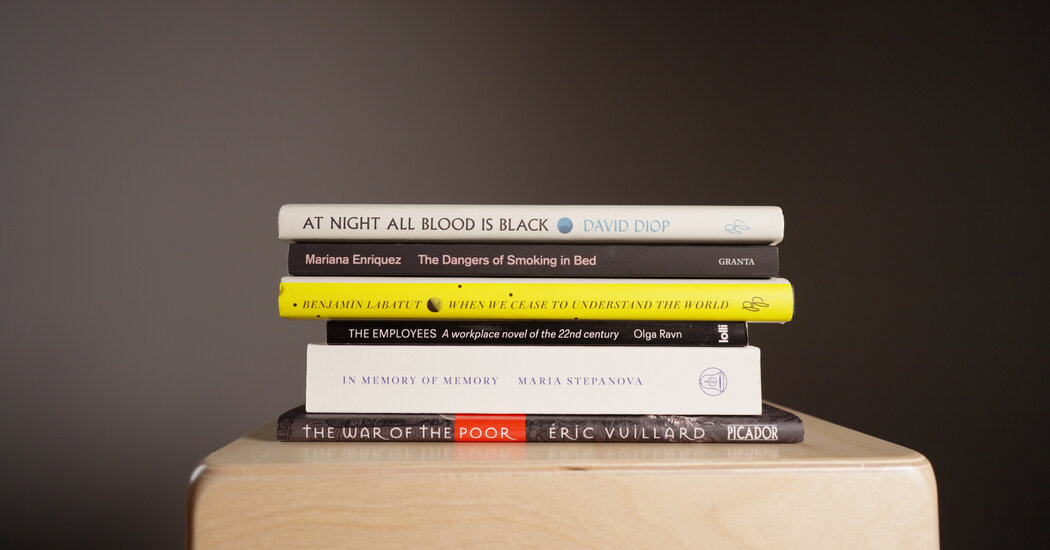 LONDON — A nightmarish tale of a Senegalese soldier fighting for France in World War I, and a workplace novel set on a spaceship, are among the six titles shortlisted for this year’s International Booker Prize.

The shortlist for the prize, arguably the world’s most significant award for literature translated into English, was announced in an online news conference on Thursday.

Éric Vuillard, a past winner of the Prix Goncourt, France’s premier book award, is perhaps the highest profile author on the shortlist, nominated for “The War of the Poor.”

The book, translated by Mark Polizzotti, tells the story of Thomas Müntzer, a 16th-century itinerant priest who led popular uprisings against feudal lords in what is now Germany. “At its best, ‘The War of the Poor’ feels urgent, breathless,” Boyd Tonkin wrote in a review for The Financial Times.

review for The New York Times.

The International Booker Prize is awarded each year to the best book translated into English and published in Britain or Ireland. It is separate from the better known Booker Prize for fiction originally written in English, but has the same prize money of £50,000, or about $70,000. The author and translator split the prize equally.

The award has helped turn several non-English authors into stars. Past winners included “The Discomfort of Evening,” by the Dutch author Marieke Lucas Rijneveld, translated by Michele Hutchison, and “Flights,” by the Polish writer Olga Tokarczuk, translated by Jennifer Croft.

Alongside “The War of the Poor” and “At Night All Blood is Black,” the shortlisted titles are:

Several of the titles are far from straightforward novels, containing elements of memoir and historical nonfiction, Lucy Hughes-Hallett, the chair of the judges, said at the news conference. “This is a fantastically vigorous and vital aspect of the way fiction is being written at the moment — people are really pushing the boundaries,” she said.

The winner will be announced June 2 in a virtual ceremony from Coventry, England.

AUSTIN, Texas--(BUSINESS WIRE)--As the first multifamily management company to be recognized in the Public Relations and Marketing Excellence Awards, … END_OF_DOCUMENT_TOKEN_TO_BE_REPLACED

There have been whispers of cooling housing and rental prices in the San Francisco Bay Area, but that hasn't yet translated into practical, noticeable … END_OF_DOCUMENT_TOKEN_TO_BE_REPLACED

Cars pass in Independence Square at twilight in Kyiv, Ukraine, Monday, Oct. 31, 2022. Rolling ... [+] blackouts are increasing across Ukraine as the … END_OF_DOCUMENT_TOKEN_TO_BE_REPLACED