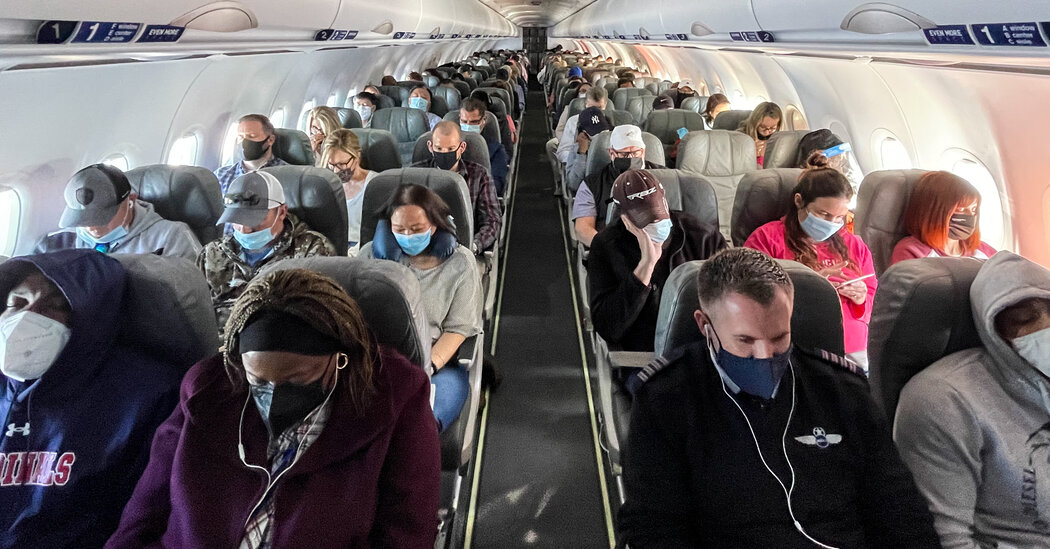 When the Centers for Disease Control and Prevention announced new freedoms for the fully-vaccinated members of the population, questions about traveling to visit grandchildren, for example, were immediate.

The answer, the C.D.C. director, Dr. Rochelle Walensky, said was yes, as long as the vaccinated grandparents lived nearby. But the agency continues to warn Americans against traveling in general.

“We know that after mass travel, after vacations, after holidays, we tend to see a surge in cases,” Dr. Walensky said Monday night on MSNBC. “And so, we really want to make sure — again with just 10 percent of people vaccinated — that we are limiting travel.”

To the frustration of airlines and others in the travel industry, the latest guidance comes as students and families are considering spring break plans almost a year after wide swaths of the United States first shut down, and a growing share of Americans tentatively book travel for later in the year.

scientists do not yet understand whether and how often immunized people may still transmit the virus. If they can, then masking and other precautions are still needed in certain settings to contain the virus, researchers have said.

“We know that the travel corridor is a place where people are mixing a lot,” Dr. Walensky said during a White House briefing on Monday. “We’re hopeful that our next set of guidance will have more science around what vaccinated people can do, perhaps travel being among them.”

Airlines for America, an industry organization, has argued that airplanes have a very low risk for virus transmission because of high-end cabin ventilation systems, strong disinfection practices and strict rules requiring that passengers wear masks. The industry has also argued that it plays a vital economic role and that further restrictions to travel could hinder the recovery.

“We remain confident that this layered approach significantly reduces risk and are encouraged that science continues to confirm there is a very low risk of virus transmission onboard aircraft,” the group said.

included $50 billion in grants and loans to prop up the airline industry, which was hobbled by the pandemic. In December, Congress approved another $15 billion in grants to keep airline workers employed. The relief bill passed by the Senate on Saturday, includes $14 billion more for airlines, a measure applauded by the industry.

In a Monday letter to President Biden’s coronavirus response coordinator, Jeffrey D. Zients, a coalition of travel and tourism trade groups asked to work with the White House on federal guidance for temporary virus “health credentials,” which could be used to securely and uniformly verify test results or vaccination status. Such guidance could also yield benefits beyond aviation, they argued.

“It could encourage more widespread adoption of processes to verify testing and vaccination records, from sports arenas to restaurants, business meetings, theme parks, and more,” the group wrote.

Currently, the Biden administration requires people traveling to the United States from another country to present a negative virus test. At one point this year, administration officials were considering a similar requirement for domestic travel, a move the airline industry pushed back against, saying it was needlessly restrictive and would hurt an already struggling sector. The C.D.C. in February said it was not recommending testing for domestic travel “at this time.”

“We remain in the midst of a serious pandemic,” Dr. Walensky said Monday at the news conference. “Therefore, everyone, whether vaccinated or not, should continue to avoid medium- and large-sized gatherings, as well as nonessential travel.”

DALLAS — The rollback of abortion rights has been received by many American women with a sense of shock and fear, and warnings about an ominous … END_OF_DOCUMENT_TOKEN_TO_BE_REPLACED

The poshest place in California's Coachella Valley is The Madison Club. This exclusive gated community in La Quinta is where A-listers and tycoons … END_OF_DOCUMENT_TOKEN_TO_BE_REPLACED