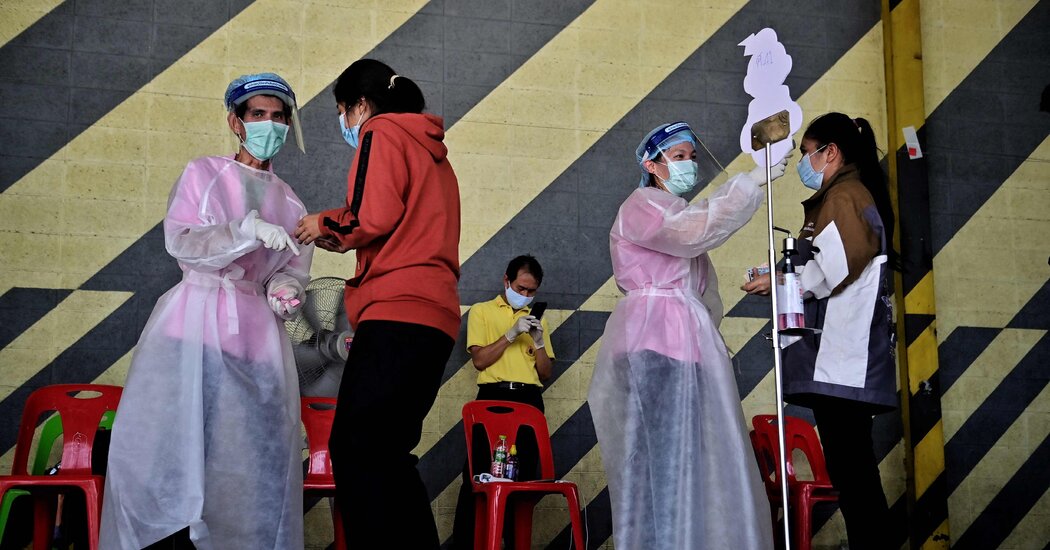 As a resurgent coronavirus threatens countries across Southeast Asia, the health authorities in Thailand are working to contain an outbreak that is ripping through the tight-knit community of gemstone traders in the southeastern reaches of the country near the border with Cambodia.

The town of Chanthaburi — which has a long history as a center of the country’s business in rubies, sapphires and other stones — is at the heart of the outbreak, which has infected at least 166 in the community of traders from Africa who work in the country. At least 103 Thais in the town have also tested positive as a result of the latest outbreak, officials reported.

The cluster of cases comes as Thailand battles its worst outbreak since the pandemic began. For nearly three weeks, the country has averaged about 2,000 new cases a day — more than double its worst peak in January. The largest outbreak has been reported in Bangkok, which is under a partial lockdown.

On Wednesday, the government reported 34 deaths, a record, and 1,983 cases. One of those who died was from Finland.

Thailand was among the most effective countries last year in controlling the virus, but it has been slow to contain outbreaks this year and has lagged behind other countries in procuring vaccines.

Now, with the latest surge in cases, it is scrambling to obtain shots and to develop a mass inoculation program.

Some officials have declared that foreigners will not be vaccinated despite earlier outbreaks among migrant workers from Myanmar and now among the African gemstone traders. Other officials have said that Thailand will inoculate foreigners but have not provided specifics.

Over the years, the gem business has attracted traders from several predominantly Muslim countries in Africa, including Gambia, Guinea and Mali. Many of them have settled in Thailand, married Thai wives and import gemstones from Africa.

Sankung Kongeh, a trader from Gambia, said members of the African community gathered daily at their offices and at the market, where they work, talk and eat together. During Ramadan, which began April 12, many also have prayed together, he said.

It is precisely that kind of close social contact that has fueled outbreaks around the world, but Mr. Kongeh discounted the group prayers as a significant risk.

“The possibility of the Covid spread has nothing to do with praying together,” said Mr. Kongeh, who recently tested negative. “It’s during the time hanging out at the office where we have the AC on, the door closed, and we chat with each other, drinking hot tea. There could be 10 or 12 of us sitting together. We don’t talk to each other during prayer.”

AUSTIN, Texas--(BUSINESS WIRE)--As the first multifamily management company to be recognized in the Public Relations and Marketing Excellence Awards, … END_OF_DOCUMENT_TOKEN_TO_BE_REPLACED

There have been whispers of cooling housing and rental prices in the San Francisco Bay Area, but that hasn't yet translated into practical, noticeable … END_OF_DOCUMENT_TOKEN_TO_BE_REPLACED

Cars pass in Independence Square at twilight in Kyiv, Ukraine, Monday, Oct. 31, 2022. Rolling ... [+] blackouts are increasing across Ukraine as the … END_OF_DOCUMENT_TOKEN_TO_BE_REPLACED