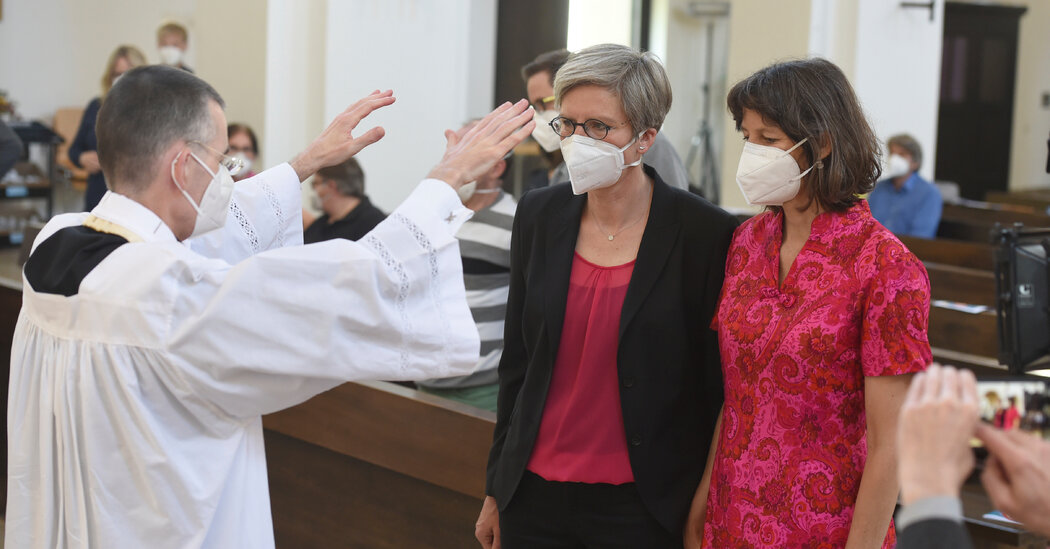 During the ceremony, Father Mönkebüscher walked around the nave, approaching couples who sat in pairs, socially distanced and masked. They rose as he placed a hand on their shoulders and spoke a blessing as they bowed their heads. After one lesbian couple had received their blessing, they dropped their masks and shared a kiss, wiping away tears.

Not everyone has been receptive of the initiative. One parish in Bavaria received threats from members of an arch-conservative Roman Catholic group and had to call the police to ensure the safety of participants at their ceremony.

The initiative is the latest strain between the Vatican and the Roman Catholic Church in Germany. Many parishioners in Germany have left the church, including those frustrated with what they see as an outdated approach to sexual morality and a failure to punish priests accused of abusing children.

According to official statistics, 272,771 people formally quit the Church in 2019, a record number that helped to galvanize efforts among the bishops to discuss with the church a series of issues they believe were contributing to the loss of members. Among them were the role of women in the church, its teachings on sexual morality, priestly celibacy and clerical power structures.

In 2019, they began a series of talks on these topics, discussions of which would be off-limits for the church in many other countries. The talks were to take place among the faithful and church leaders over the course of two years but were extended because of restrictions on gatherings that were introduced last year at the outbreak of the pandemic. They are now to continue into February 2022.

Among those leaving the Church in Germany are many same-sex couples, who are tired of feeling they are not accepted for who they are, said the Rev. Reinhard Kleinewiese, who held a blessing at the Church of St. Mary in the western town of Ahlen on Sunday evening. Ten couples attend, all of them heterosexuals.

“We can’t ignore the fact that a lot of homosexual couples have already left the church. There are many who don’t come anymore,” Father Kleinewiese said. “Nevertheless, it is good and important for this situation and beyond that we make clear that we are not in agreement with Rome on certain issues and prohibitions.”

A sprawling waterfront compound on the eastern side of Lake Tahoe has hit the market for $55 million.Known as the Wovoka estate, it is owned by … END_OF_DOCUMENT_TOKEN_TO_BE_REPLACED

America is absorbing the shock of another bloody mass shooting, a day after an 18-year-old man wearing body armour and carrying assault rifles entered … END_OF_DOCUMENT_TOKEN_TO_BE_REPLACED