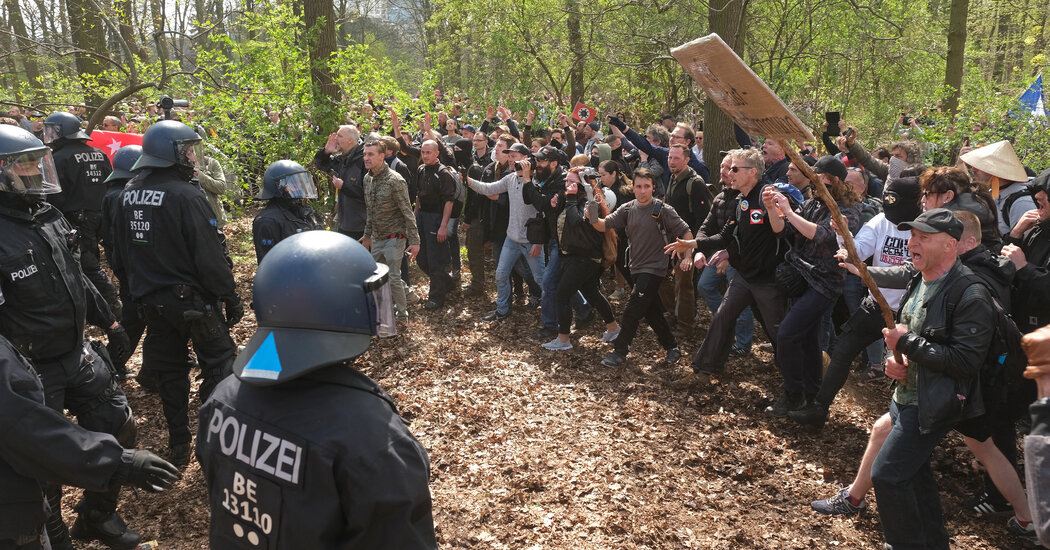 BERLIN — Germany’s domestic intelligence service said on Wednesday that it would surveil members of the increasingly aggressive coronavirus denier movement because they posed a risk of undermining the state.

The movement — fueled in part by wild conspiracy theories — has grown from criticizing coronavirus lockdown measures and hygiene rules to targeting the state itself, its leaders, businesses, the press and globalism, to name a few. Over the past year, demonstrators have attacked police officers, defied civil authorities and in one widely publicized episode scaled the steps of Parliament.

“Our basic democratic order, as well as state institutions such as parliaments and governments, have faced multiple attacks since the beginning of the measures to contain the Covid-19 pandemic,” the Interior Ministry said in a statement confirming that parts of the denier movement were under observation. The Interior Ministry oversees the intelligence agency, the Office for the Protection of the Constitution.

In announcing the decision to keep tabs on conspiracy theorists, intelligence officials noted the movement’s close ties to extremists like the Reichsbürger, who refuse to accept the legitimacy of the modern German state.

The movement, called Querdenken, German for lateral thinking, communicates and recruits over social media and has a large presence on the encrypted chat service Telegram, where its main channel has 65,000 subscribers. Parts of AfD, a German right-wing populist party that is also under surveillance, have allied themselves with protesters.

Still, the Interior Ministry took pains to say that the danger from coronavirus deniers and conspiracy theorists does not fit the mold posed by the usual, politically driven groups, including those on the far left and right, or by Islamic extremists. As a result, the authorities are setting up a new department specifically tasked with handling cases that seek to delegitimize the state.

The news comes days after Germany instituted new virus rules that apply nationwide and allow the federal government to enforce lockdowns. (Such regulation had previously been in the hands of the country’s 16 states.) It also suggests that the authorities believe coronavirus denier groups could continue to flourish and pose a threat after the pandemic ends.

Germany has seen a persistently high number of new daily cases recently, averaging about 19,000, up from about 8,000 two months ago.

Last August, when restrictions were relatively light, the deniers drew 40,000 protesters to Berlin. While most were peaceful, even if eschewing masks and social distancing measures, a small number managed to jump police lines and climb Parliament’s outside stairs, a breach of security that President Frank-Walter Steinmeier characterized as an “attack on the heart of democracy.”

The national intelligence agency’s formal observation of the deniers’ group is the first step in a process that could lead to it being declared unconstitutional and ultimately banned.

Pia Lamberty, a psychologist and expert in the German conspiracy scene, warned of connections between the deniers and far-right extremists. “The danger of Querdenken,” she said, “has long been underestimated.”

Three men were indicted in the death of the notorious gangster James (Whitey) Bulger, who was beaten to death four years ago in a West Virginia … END_OF_DOCUMENT_TOKEN_TO_BE_REPLACED

Dr. Connolly and Dr. Mott live in the North Baltimore neighborhood of Homeland, known for its strong public schools and colonial architecture, which … END_OF_DOCUMENT_TOKEN_TO_BE_REPLACED