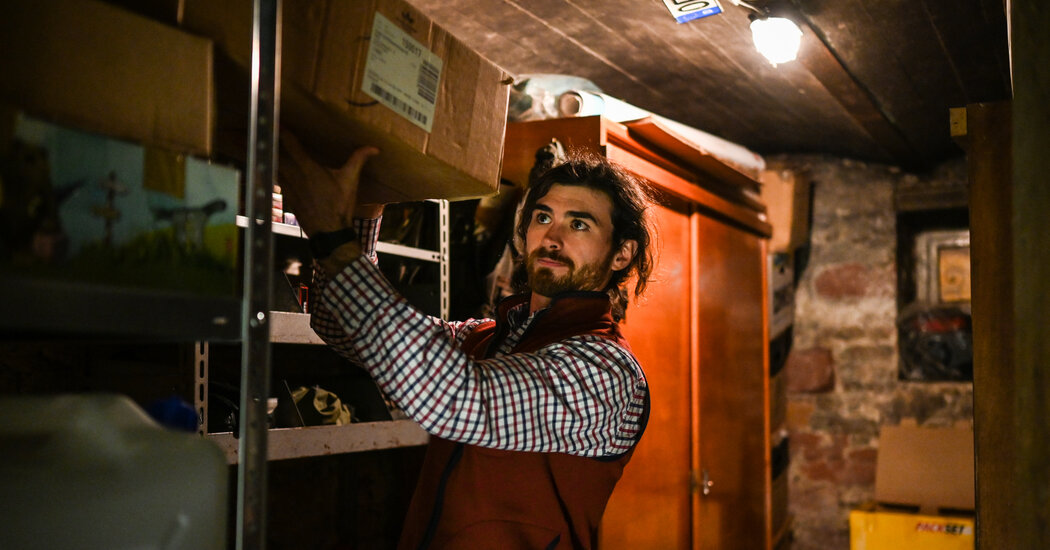 FRANKFURT — One of postwar Germany’s most spectacular terrorism trials opened Thursday, with federal prosecutors laying out their case against a military officer who they said had been motivated by a “hardened far-right extremist mind-set” to plot political murder in the hope of bringing down the country’s democratic system.

The case of First Lieutenant Franco A., whose surname is abbreviated in keeping with German privacy laws, shocked Germany when he was arrested four years ago and has since pushed the country to confront a creeping threat of infiltration in the military and the police by far-right extremists.

Franco A. was caught in 2017 trying to collect a loaded gun he had hidden in an airport bathroom. His fingerprints later revealed that he had a second — fake — identity as a Syrian refugee, setting off alarm bells and an investigation that would span three countries and multiple intelligence agencies. Prosecutors have accused him of planning terrorist attacks using that identity with the intention of stoking growing fears over immigration in Germany and triggering a national crisis.

The case has become the latest warning for a country that has spent decades atoning for its Nazi past but that also has a track record of turning a blind eye to far-right extremism and terrorism.

far more extensive than they had imagined.

One group, run by a former soldier and police sniper in northern Germany, hoarded weapons, kept enemy lists and ordered body bags, and is the subject of an ongoing terrorism investigation. Another, run by a special-forces soldier code-named Hannibal, put the spotlight on the KSK, Germany’s most elite force. Last year, after explosives and SS memorabilia were found on the property of a sergeant major, an entire KSK unit was disbanded by the defense minister.

In all these cases the authorities had failed to identify extremists inside the institutions, sometimes for years. Franco A. is no exception. He received glowing reports from superiors throughout his military career even as he wrote and publicly spoke about his far-right views.

In 2014, after submitting a Master’s thesis riddled with far-right anti-Semitic conspiracy theories, he was asked to write another one. But he was never reported even though a military historian who had been asked to assess the thesis called it a “a radical nationalist, racist appeal.”

Ms. Weingast, the prosecutor, described Franco A.’s views as stemming from a “longstanding hardened far-right extremist mind-set” that was particularly hostile to Jews. Franco A., she said, was convinced that Zionists were waging a “race war” that would lead to the extinction of the German race. He considered Germany to be under occupation by the United States.

All this had motivated him to plan “a violent attack on life” that would “create a climate of fear,” Ms. Weingast told the court.

“This was the intention of the accused,” she said.

According to the indictment, Franco A. had gone beyond abstract plotting and in July 2016 had traveled to Berlin to visit the workplace of one of his alleged targets, Ms. Kahane, the Jewish activist. He drew a sketch of the location of her office and took several pictures of the license plates of cars in the parking garage.

Franco A.’s lawyer, Mr. Fricke-Schmitt, dismissed any suggestion that his client had a far-right mind-set. “He is interested in rowing,” he said. “He listens to punk music.”

But Franco A. kept a record of his far-right ideas in a diary and a series of audio memos on his phone. The New York Times has a transcript of these audio memos.

The Seattle Seahawks are very much still in the running for Baker Mayfield. (Photo by Stacy ... [+] Revere/Getty Images) Getty Images The Seattle … END_OF_DOCUMENT_TOKEN_TO_BE_REPLACED

(CNN) — Kim Kyung-seop recalls going to cheap bars after class with his friends, where they binged on as much makgeolli as possible. "You know the … END_OF_DOCUMENT_TOKEN_TO_BE_REPLACED