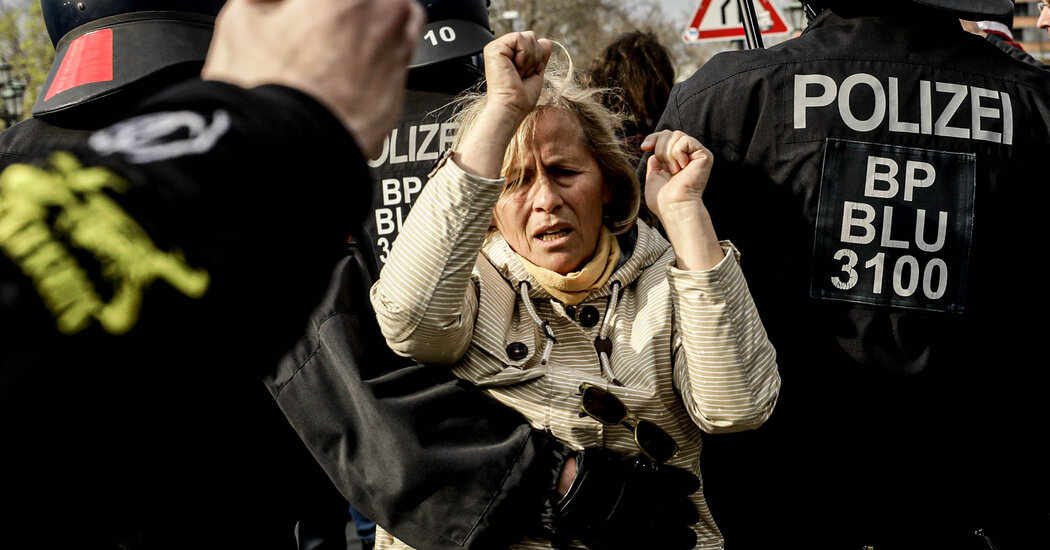 The German domestic intelligence agency is keeping close tabs on a group of coronavirus deniers, who, in their protests against restrictions and tendency to believe in conspiracy theories, have found common cause with far-right extremists.

Government officials said the movement’s close ties to extremist organizations, such as the “Reich citizens” — or “Reichsbürger,” as they are known in German, referring to a group that refuses to accept the legitimacy of the modern German state — were troubling. Many of the coronavirus deniers say they also believe in QAnon conspiracy theories, and protesters are frequently seen holding signs with anti-Semitic tropes. A number of journalists have been attacked while covering the demonstrations.

A spokesman for the Interior Ministry said in a statement, “Our basic democratic order, as well as state institutions such as parliaments and governments, have faced multiple attacks since the beginning of the measures to contain the Covid-19 pandemic.” Several regional intelligence agencies have already been observing participants in the movement, he added.

The group of deniers, which started as a fringe movement last spring, has grown into a coordinated effort that organizes mass demonstrations across Germany. The rallies occasionally turn aggressive, and many have ended in scuffles with law enforcement officers.

AfD, a German right-wing populist party, have allied themselves with protesters. The national intelligence agency’s formal observation of the deniers’ group is the first step in a procedure that could lead to it being declared anti-constitutional and ultimately banned.

A week ago, about 8,000 people in Berlin protested the passing of a law that gives the federal government power to implement tougher restrictions. Germany has seen a persistently high average number of new daily cases recently, averaging about 18,000 a day, according to a New York Times database, up from about 8,000 a day two months ago.

AUSTIN, Texas--(BUSINESS WIRE)--As the first multifamily management company to be recognized in the Public Relations and Marketing Excellence Awards, … END_OF_DOCUMENT_TOKEN_TO_BE_REPLACED

There have been whispers of cooling housing and rental prices in the San Francisco Bay Area, but that hasn't yet translated into practical, noticeable … END_OF_DOCUMENT_TOKEN_TO_BE_REPLACED

Cars pass in Independence Square at twilight in Kyiv, Ukraine, Monday, Oct. 31, 2022. Rolling ... [+] blackouts are increasing across Ukraine as the … END_OF_DOCUMENT_TOKEN_TO_BE_REPLACED