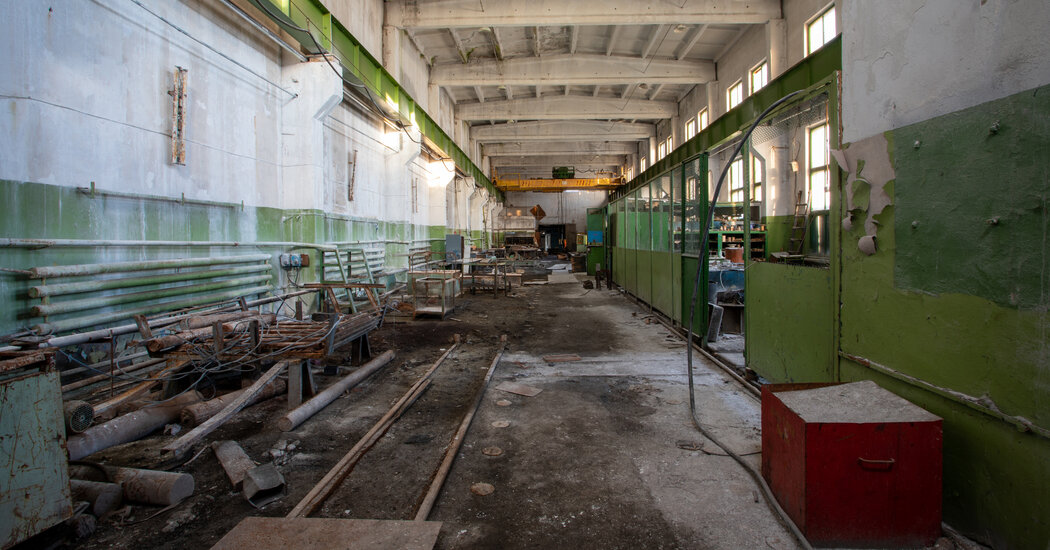 Sergei Chernikov, my guide, had a bolt-action rifle slung over his shoulder — in case we came across any polar bears, he said, or in case they came across us.

We were standing at the rudimentary dock in Pyramiden, a ghost town on the Norwegian archipelago of Svalbard, in the High Arctic. I’d heard that in 1998 the Russian government had tricked the town’s 1,000 residents into taking a holiday on the mainland, only to close the mine and forbid them from returning. According to the rumor, it had been abandoned ever since, frozen in time at the top of the world. Was it true? I asked.

Sergei shook his head before I’d even finished my question.

Barentsburg, which is still functional, and Pyramiden, long since empty — are Russian settlements.

The presence of Russian settlements stems from the fact that the Svalbard Treaty granted signatories — including Russia — rights to Svalbard’s natural resources. Eventually, Trust Arktikugol, a Russian state-owned coal company, took ownership of both Pyramiden and Barentsburg.

Pyramiden would go on to outlast the Soviet Union, finally shuttering its doors over a series of months in 1998. In truth, the place had been in pretty steep decline for years. Accidents in the mine, financial turmoil in Russia and a 1996 charter plane crash that killed 141 people combined to seal its fate.

At over 78 degrees north, Pyramiden is a place of records and extremes. When the sun disappears below the horizon each fall in late October, it isn’t seen again until mid February of the following year. Conversely, in summer, the sunlight is unyielding for more than three months.

And yet, walking around with Sergei, I couldn’t help but sense that things had moved quickly in the end. Manuals sat open, bottles of vodka were left on windowsills. There were scattered journals, photographs of men with impressive mustaches, a typewriter — even an old basketball, burst at the seams.

Perhaps most poignant were the children’s toys, scattered among what was once a schoolhouse.

In its heyday, Pyramiden provided its 1,000 residents with urban facilities and a high standard of living. The town’s offerings included a school, a library, an ice hockey rink, a sports hall, dance and music studios, a radio station, a cinema that doubled as a theater and a cemetery for cats.

If something exists in Pyramiden, then it is very probably the northernmost example in the world. (The settlement is around 500 miles farther north than Utqiargvik, Alaska, the northernmost community in the United States.)

The old cultural center houses what’s likely the northernmost grand piano and gymnasium. Nearby, Sergei and I walked around inside the long-emptied swimming pool — once heated, and the envy of the residents of Longyearbyen, the much larger Norwegian settlement to the south.

On a plinth outside that remarkable building stands an enormous statue of Lenin, his cold head sternly surveying the town, the sole remaining witness to the emptying of Pyramiden.

There’s real beauty here, too: the shimmering fur of a family of arctic foxes living under the hotel; sapphire blues laser-beaming out of the nearby Nordenskiold Glacier; low sun catching cracked windows in the canteen, kaleidoscopic light dancing on the floor; sunrise and sunset washing that extraordinary mountaintop in pinks and golds.

While much of the town now lies dormant, very slowly decaying, the Pyramiden Hotel — likely the northernmost in the world, of course — and the cultural center have been revived in recent years.

These are the only buildings in town that are still regularly used. While shifting permafrost has warped some of the wooden buildings, their sturdy structures stand firm.

It’s in the hotel that a small community of Russians and Ukrainians live and work, welcoming day trippers and adventurous travelers looking to spend the night.

During my visit, Dina Balkarova worked the bar. “Normally I live in Barentsburg,” she said. “But in Russia I don’t work in bars — I’m really an opera singer.” She told me that when she had time to herself, she’d ask one of the armed residents (no one can be without a gun this deep in polar bear country) to accompany her down to old oil drums by the dock. There, she’d test out her voice against the rusting metal.

This was the sort of eccentricity I’d hoped to find when, cruising around Svalbard earlier that summer, I’d first heard about Pyramiden. If anything, though, the place was less strange than I had imagined — the people were warm and proud of the town’s history, as they might be anywhere else in the world.

The few Russians and Ukrainians who have returned in recent years don’t dream of reviving Pyramiden as a functioning town. Instead, they told me, they’re hoping to preserve its heritage, which had so nearly been lost.

The buildings, they say, may be cold and lifeless, but at least they aren’t entirely abandoned.

It’s a property that offers a unique open floor plan—plus a hot tub with a view.“It was a Methodist church located in a historic little area of St. … END_OF_DOCUMENT_TOKEN_TO_BE_REPLACED