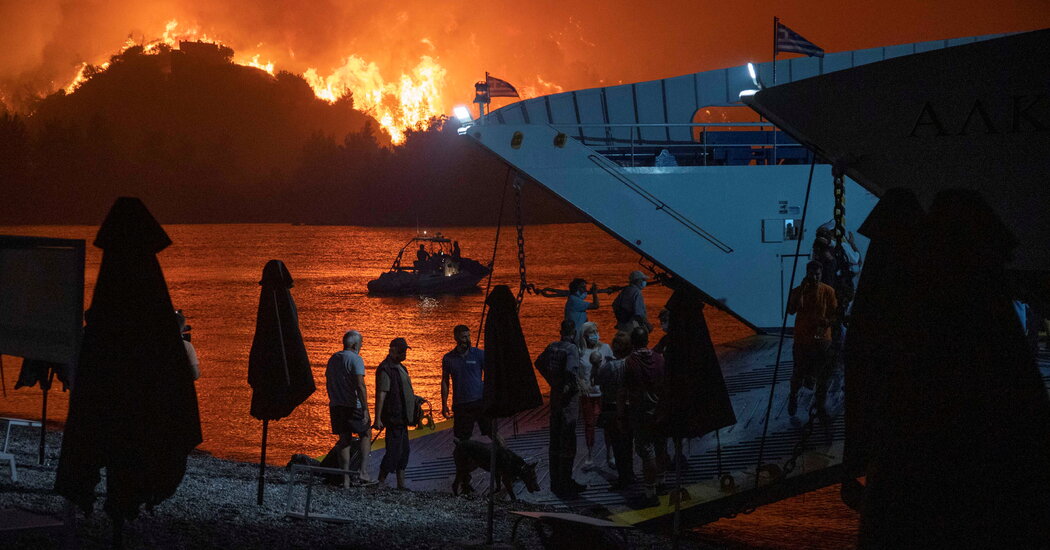 ATHENS — Firefighters continued to battle blazes across Greece on Saturday after another difficult night that saw thousands more people fleeing their homes and hundreds being evacuated by sea, as southern Europe grapples with one of its worst heat waves in decades.

Wildfires are also still raging in Turkey, which is in its 11th day of trying to extinguish flames that are ravaging its southern coastline and that have killed at least eight people and destroyed hundreds of acres of land.

High winds in Greece hampered nighttime firefighting efforts on Friday as wildfires tore through swaths of forestland north of Athens, the capital, and through mountains and farmland on the island of Evia and on the southern Peloponnese peninsula.

As flames ravaged Evia’s coastline, hundreds of residents and tourists were evacuated by ferry, dramatic scenes of which were captured on video by the National Observatory of Athens’s online weather service, Meteo.

North of the capital, police officers went door to door to urge people to abandon their homes, and they evacuated a detention facility for migrants, a day after moving asylum seekers out of another camp in the area.

At first light on Saturday, firefighters and aircraft from several countries — including Croatia, Cyprus, France, Israel, Sweden and Ukraine — joined their Greek counterparts in battling blazes dotting the mainland and islands. Romania and Switzerland were also sending help, followed by the Czech Republic, Egypt, Germany and Spain.

Fifty-five fires were active around the country, the largest of which were north of Athens, on the island of Evia and in Fokida, in central Greece, according to Nikos Hardalias, the deputy civil protection minister, speaking at a briefing early Saturday afternoon. He added that the situation had improved slightly since Friday, but that fires were constantly rekindling as winds strengthened.

Dozens of firefighting aircraft and thousands of firefighters have been working to control the wildfires, but overnight, TV reports said, flames moved north, reaching a new town and forcing six neighborhoods to evacuate.

A 38-year-old volunteer firefighter from Ippokrateios Politeia, a settlement north of Athens affected by the fires, died on Thursday of head injuries after being hit by a falling electricity pylon.

More than 20 people have suffered burns, including four firefighters, two of whom were critically injured. President Katerina Sakellaropoulou visited those firefighters on Saturday at a hospital in Athens.

The fires have razed tens of thousands of acres of forestland, but the number of homes that have been destroyed remains unclear.

Officials have said that at least three people have been arrested and are facing arson charges in connection with blazes in Kryoneri, north of Athens; in Fthiotida, in central Greece; and in Kalamata, in southern Greece.

Editor’s Note: This story is part of As Equals, CNN’s ongoing series on gender inequality. For information about how the series is funded and more, … END_OF_DOCUMENT_TOKEN_TO_BE_REPLACED

IdentityForce, a service from the credit bureau TransUnion, monitors your personally identifiable information (PII) so you don’t have to do it … END_OF_DOCUMENT_TOKEN_TO_BE_REPLACED