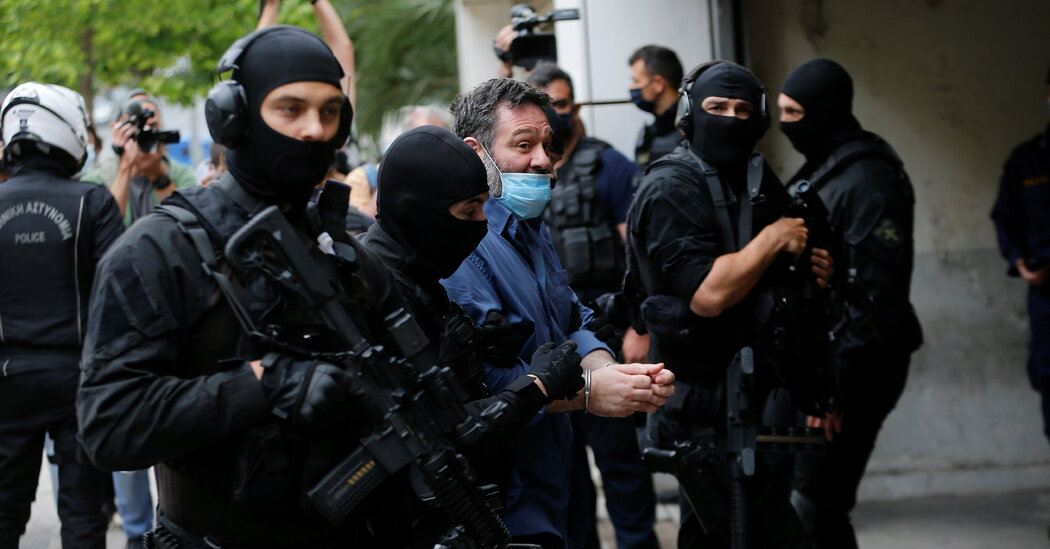 ATHENS — A convicted Greek neo-Nazi and member of the European Parliament was extradited back to Greece on Saturday to serve a 13-year prison term for his part in running the criminal organization Golden Dawn, once Greece’s third-largest political party.

Ioannis Lagos arrived in Athens on a flight from Brussels, the seat of the European Parliament, where he has sat as an independent since 2019. The parliament’s lawmakers stripped him of his immunity at the end of last month.

Greek state television aired footage of the handcuffed 48-year-old being escorted off a plane and into a van at the Athens International Airport by armed officers of the Greek police’s counterterrorism unit. Shortly afterward he was rushed through the back entrance of the capital’s court complex.

“For orthodoxy and Greece, every sacrifice is worthwhile,” he told reporters.

Mr. Lagos was a leading member of the extreme-right and now-defunct Golden Dawn, which rose to prominence in Greece’s Parliament in 2012 at the peak of the country’s financial crisis. He was among dozens of former legislators and supporters of the party convicted in a landmark verdict last October.

After the country’s most high-profile political trial in decades, a Greek court ruled that the party had operated as a criminal organization, systematically launching violent attacks against migrants and leftist critics. A total of 13 of the party’s former lawmakers were given prison terms, including another prominent member Christos Pappas, who remains at large.

Mr. Lagos fled to Brussels immediately after the verdict, taking advantage of the immunity he was afforded as a member of Europe’s Parliament. Efforts by the Parliament to lift his immunity were delayed by the pandemic.

Starting as an obscure far-right organization with a penchant for using neo-Nazi symbols and oratory in 1980s, Golden Dawn was propelled into the political mainstream a decade ago, fueled by public discontent against austerity measures imposed by Greece’s international creditors and an influx of migrants.

Casting itself as a patriotic and anti-establishment force, it was a force in Greece’s Parliament from 2012 to 2019, becoming the third-largest party at its prime. But it discreetly maintained links with neo-fascist parties in Europe and the United States.

Its decline was precipitated by the murder of the leftist musician Pavlos Fyssas in 2013 by a member of Golden Dawn, Giorgos Roupakias.

That killing led to the arrest of the entire party leadership and a judicial investigation, prompting a five-year trial that put most of its politicians and dozens of supporters behind bars. A notable exception is Mr. Pappas, the party’s No. 2, who remains at large.

Like many other members of Golden Dawn, Mr. Lagos has insisted that the case against him is politically motivated and that he is being persecuted for his views, not his actions.

The extradition of Mr. Lagos was welcomed by Greece’s center-right government.

“Greek democracy strived and eliminated the toxic poison of Golden Dawn,” said Aristotelia Peloni, a government spokeswoman. “Rule of law stood strong against the criminals, and the judiciary gave its answer with its rulings.”

AUSTIN, Texas--(BUSINESS WIRE)--As the first multifamily management company to be recognized in the Public Relations and Marketing Excellence Awards, … END_OF_DOCUMENT_TOKEN_TO_BE_REPLACED

There have been whispers of cooling housing and rental prices in the San Francisco Bay Area, but that hasn't yet translated into practical, noticeable … END_OF_DOCUMENT_TOKEN_TO_BE_REPLACED

Cars pass in Independence Square at twilight in Kyiv, Ukraine, Monday, Oct. 31, 2022. Rolling ... [+] blackouts are increasing across Ukraine as the … END_OF_DOCUMENT_TOKEN_TO_BE_REPLACED