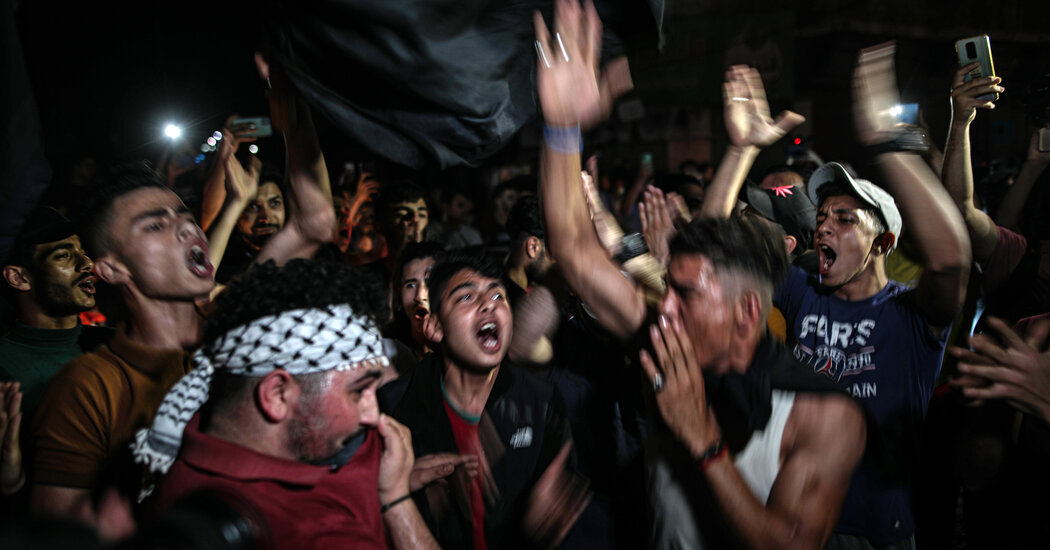 GAZA CITY — As the cease-fire between Israel and Hamas took effect at 2 a.m. local time on Friday, thousands of Palestinians gathered in the streets of Gaza City to celebrate what Hamas supporters were calling a defeat of the Israeli forces.

With the skies free from the threat of Israeli bombardment for the first time since May 10, loudspeakers at mosques blared “God is great,” a chant that is more often heard during Islamic holidays such as Eid. Voices on the speakers called on residents to come out “to celebrate the victory,” while some Hamas supporters passed out sweets and others toted weapons on their shoulders, occasionally firing into the air.

“I feel we won,” said Ibrahim Hamdan, 26, adding that barrages of rocket attacks by Hamas had forced Israel to accept the cease-fire.

“It’s the first time that the resistance has hurt the enemy,” he said.

Ibrahim al Najjar, a 26-year-old who joined the rally with two friends, said Hamas had achieved a milestone when its rockets reached Tel Aviv, the bustling Israeli coastal city that for the first time last week found itself in the militants’ firing line, with Israeli beachgoers forced to scurry to safety.

said they had been trying to kill, so far without success.

But the celebratory mood belied the devastation in Gaza, where Israeli airstrikes killed more than 200 Palestinians, destroyed buildings, left huge swaths of the territory without electricity or water, and forced tens of thousands to flee their homes. Some in the crowd questioned what the conflict had accomplished.

Ramadan Smama came out not to celebrate, he said, but to take in the destruction. The 53-year-old said that he admired the growing capabilities of Hamas’s arsenal of rockets, but said it was too soon to tell whether the fighting would improve life for the two million people of Gaza.

It’s a property that offers a unique open floor plan—plus a hot tub with a view.“It was a Methodist church located in a historic little area of St. … END_OF_DOCUMENT_TOKEN_TO_BE_REPLACED