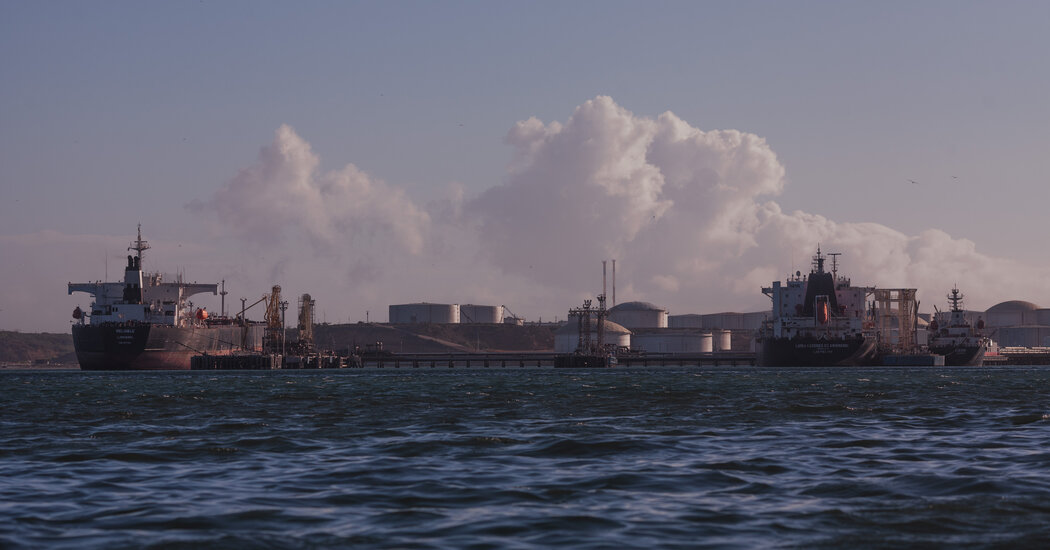 The scrappy oil tanker waited to load fuel at a dilapidated jetty projecting from a giant Venezuelan refinery on a December morning. A string of abandoned ships listed in the surrounding turquoise Caribbean waters, a testament to the country’s decay after years of economic hardships and U.S. sanctions.

Yet, on computer screens, the ship — called Reliable — appeared nearly 300 nautical miles away, drifting innocuously off the coast of St. Lucia in the Caribbean. According to Reliable’s satellite location transmissions, the ship had not been to Venezuela in at least a decade.

Shipping data researchers have identified hundreds of cases like Reliable, where a ship has transmitted fake location coordinates in order to carry out murky and even illegal business operations and circumvent international laws and sanctions.

maritime resolution signed by nearly 200 nations in 2015, all large ships must carry and operate satellite transponders, known as automatic identification systems, or AIS, which transmit a ship’s identification and navigational positional data. The resolution’s signatories, which include practically all seafaring nations, are obligated under the U.N. rules to enforce these guidelines within their jurisdictions.

sophisticated examples of AIS manipulation, officials said, and the country goes to great lengths to conceal the illegal activities of its large fishing industry.

Windward is one of the main companies that provide shipping industry data to international organizations, governments and financial institutions — including the United Nations, U.S. government agencies and banks like HSBC, Société Générale and Danske Bank. At least one client, the U.N. Security Council body that monitors North Korea’s sanctions compliance, has used Windward’s data to identify ships that breach international laws.

reported an increase in cases of AIS manipulation and jamming in the Black Sea, coinciding with U.S. and Ukrainian claims that Russia was trying to hide its oil exports and smuggle stolen Ukrainian grain.

many of the same ships have recently started trading Venezuelan oil that is under U.S. sanctions.

The spread of AIS manipulation by E.U.-registered vessels shows how advances in technology allow some shipowners to earn windfall profits from commodities under sanction while benefiting from European financial services and legal safeguards.

Cyprus’s deputy shipping minister, Vassilios Demetriades, said illegal manipulation of on-ship equipment is punishable by fines or criminal penalties under the island’s laws. But he has downplayed the problem, saying AIS’s “value and trustworthiness as a location device is rather limited.”

According to Cyprus’s corporate documents, Reliable belongs to a company owned by Christos Georgantzoglou, 81, a Greek businessman. The ship crossed the Atlantic for the first time shortly after Mr. Georgantzoglou’s company bought it last year, and has transmitted locations around eastern Caribbean Islands since, according to Windward’s analysis.

But Venezuela’s state oil company records reviewed by The New York Times show that Reliable was working for the Venezuelan government in the country during that time.

Mr. Georgantzoglou and his company did not respond to repeated requests for comment.

Their Venezuelan dealings appear to contradict a promise made by Greece’s powerful shipowners association in 2020 to stop transporting the country’s oil. The association did not respond to requests for comment.

Meanwhile, Reliable is still moving fuel around Venezuelan ports or loading crude onto Asia-bound ships in open waters to hide its origin, according to two Venezuelan oil businessmen, who asked not to be named for security reasons. It still broadcasts coordinates of a ship adrift in the Caribbean Sea.

Soon after Herschel Walker, the former football star, announced he would run for U.S. Senate in Georgia as a Republican, his son Christian appeared … END_OF_DOCUMENT_TOKEN_TO_BE_REPLACED

SpaceX launched four people to the International Space Station from Florida on Wednesday, as Elon Musk's company keeps up a steady pace of crewed … END_OF_DOCUMENT_TOKEN_TO_BE_REPLACED