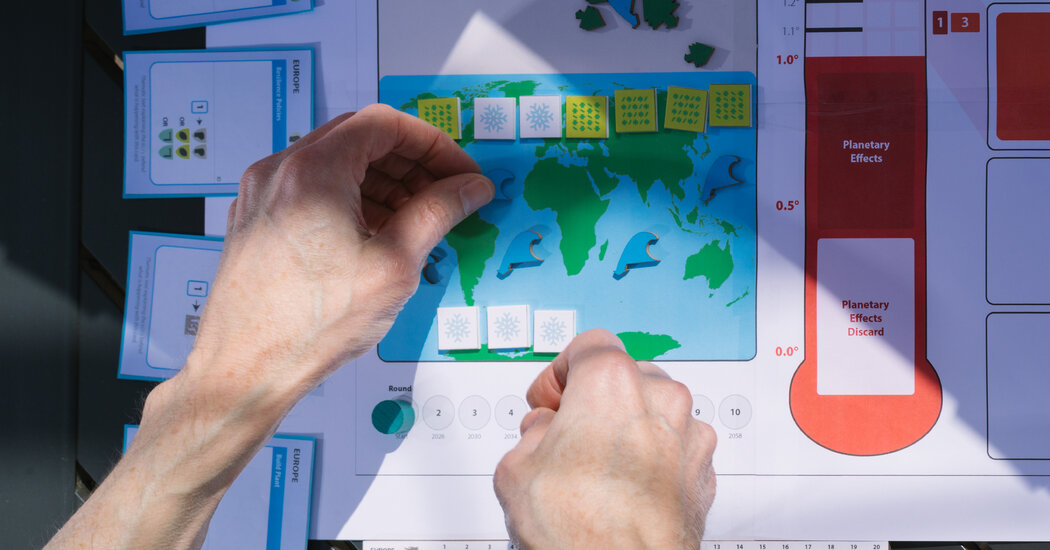 The Earth’s average temperature unexpectedly leapt 0.4 degrees Celsius on Saturday afternoon, putting the planet on the brink of catastrophe. Within hours, millions of people would be displaced, crops would fail and sea levels would rise.

Until, that is, Matt Leacock realized that the four people playing Climate Crisis, a board game he is developing, had gotten the rules wrong.

“No, divide it by four!” he told the players, who were testing the game. They had been counting a pile of brown cubes, representing greenhouse gas emissions, to calculate how much the world’s temperature would increase. They’d just forgotten to divide the figure by the number of players.

The players — all experts from the Red Cross Red Crescent Climate Center, playing online and linked up via a video call — looked relieved. But it wasn’t all good news. “There might be some forest fires in China, and Europe and the United States soon,” Leacock said.

Elizabeth Hargrave, the creator of Wingspan, in which players compete to attract birds to nature reserves. “It’s hard to wrap my head around how to make a game about a real life — very dire — situation fun,” she added.

Leacock first considered making a game about climate change in August 2019 after a British academic sent him an email suggesting that he tweak Pandemic to make it about that theme. Leacock dismissed the notion, he said, “but then another person reached out with that idea, then another person.”

Last March, he decided to give it a go. So as much of the world went into lockdown and looked for escapist entertainment, he began reading extensively on climate change.

“I immediately fell into a big trough of despair,” Leacock said. “Climate crisis books are a rough bunch, in that they all start with laying out the crisis, trying to make you realize the gravity of the situation.”

He dragged himself out of that hole, he said, only after he began collaborating with Matteo Menapace, an Italian game designer in London. Together, they investigated proposed solutions to the crisis, reading up on things like clean energy rollouts and geoengineering projects that remove carbon dioxide from the atmosphere.

Lacerda made his own climate change game, called CO2, and its rule book stretched to 26 pages, he said. (The game’s audience was small, he added.)

Erin Coughlan de Perez, who was playing the United States, said the tumbling crises were “an excellent way of showing the feedback loops involved in climate change.”

Yet her smile as the disaster unfurled was a sign of something else: She was enjoying the game.

MIAMI--(BUSINESS WIRE)--Intelli Smart Homes, the leading smart home technology company, has been recognized as one of America’s fastest-growing … END_OF_DOCUMENT_TOKEN_TO_BE_REPLACED

Customers outside a Walmart store in Torrance, California, US, on Sunday, May 15, 2022. Walmart Inc. is scheduled to release earnings figures on May … END_OF_DOCUMENT_TOKEN_TO_BE_REPLACED

The past few years have been brutal on homebuyers' budgets. Would-be buyers have been priced out of some of the most desirable neighborhoods thanks to … END_OF_DOCUMENT_TOKEN_TO_BE_REPLACED