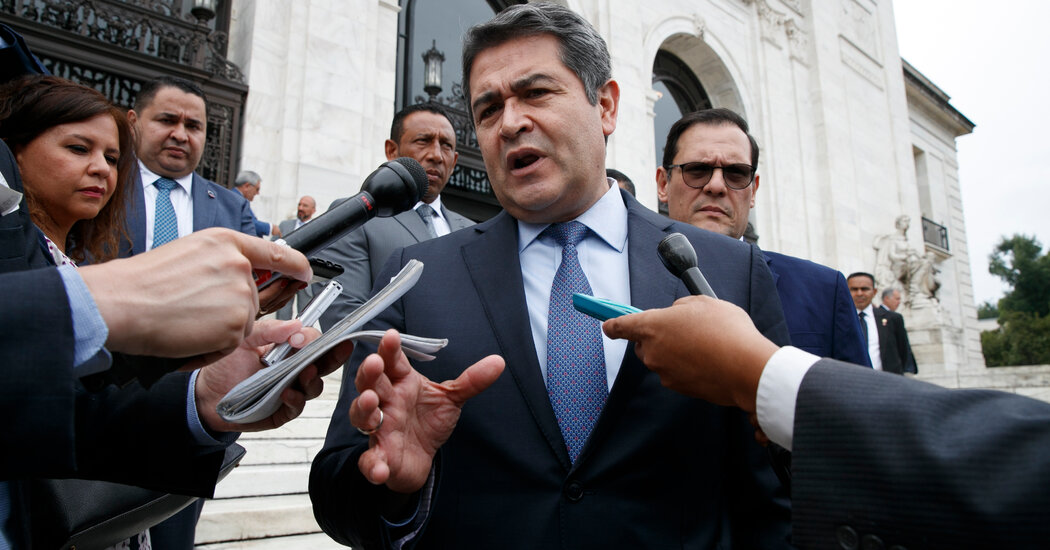 “I will maintain international cooperation,” he wrote. “But the next government and those of other countries? How will the future be if the narcos win benefits from the USA for their false testimonies, with obvious lies?”

The trial of Mr. Fuentes, who has denied the charges against him, is expected to run into next week. A defense lawyer for Mr. Fuentes, Eylan Schulman, said in his opening argument that his client was “an innocent man wrongly accused of very serious crimes.”

If Tuesday’s statements, coupled with court filings, are any indication, prosecutors are likely to draw a stark portrait of Mr. Hernández as a key player in the drug trafficking industry, which has contributed to the dysfunction and violence that has driven many Hondurans to leave the country in search of safety and better opportunity.

Mr. Gutwillig, the prosecutor, did not mince words in his opening arguments on Tuesday: He called Honduras “a narco-state.”

Mr. Fuentes, he said, “distributed massive quantities of cocaine to the United States,” a business that was enabled through his connections “to police, military and political power in Honduras: mayors, congressmen, military generals and police chiefs, even the current president of Honduras.”

“The defendant owned them all — bought and paid for,” Mr. Gutwillig said.

Mr. Fuentes developed a relationship with Mr. Hernández, who took office in 2014, in a series of secret meetings in 2013 and 2014 during which the men “plotted to send as much cocaine as possible to the United States,” the prosecutor said. Mr. Fuentes paid Mr. Hernández $25,000 for the help.

Mr. Hernández, he said, “made the defendant bulletproof.”

Court records describe conversations between Mr. Hernández and Mr. Fuentes in which the president tells the accused trafficker not to worry about arrest, extradition or the long reach of the United States Drug Enforcement Administration. According to prosecutors, Mr. Hernández told Mr. Fuentes that his fight against drug trafficking was a bluff and that he planned to get rid of the extradition policy and swamp the United States with cocaine.

A century-old mansion in Pittsburgh has undergone a serious overhaul. The end result is one of the most expensive single-family homes in the Steel … END_OF_DOCUMENT_TOKEN_TO_BE_REPLACED

ATLANTA, GEORGIA - OCTOBER 16: Ozzie Albies #1 of the Atlanta Braves celebrates after scoring the ... [+] winning run on a walk-off RBI single by … END_OF_DOCUMENT_TOKEN_TO_BE_REPLACED

Mr. Amess was also a vocal supporter of the Iranian opposition group Mujahedeen Khalq, or M.E.K., which campaigns for the overthrow of Iran’s … END_OF_DOCUMENT_TOKEN_TO_BE_REPLACED