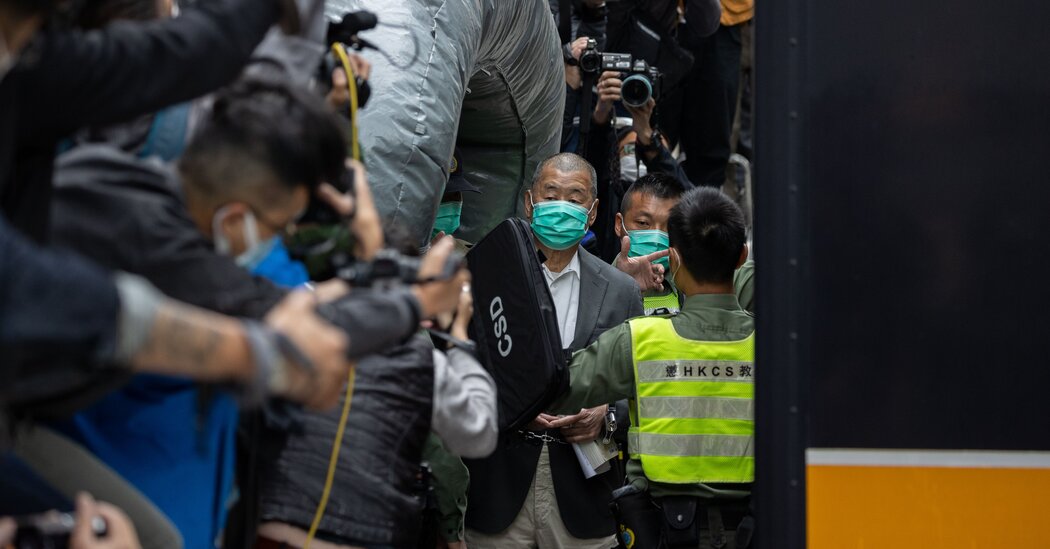 HONG KONG — Seven of Hong Kong’s leading veteran democracy campaigners were found guilty on Thursday of unauthorized assembly, as Beijing’s campaign to quash the city’s opposition ensnared some of its most senior and well-recognized figures.

Martin Lee, an 82-year-old barrister known as the “father of democracy” in Hong Kong, Jimmy Lai, 73, a media tycoon and founder of the staunchly pro-democracy Apple Daily newspaper, and Margaret Ng, 73, a respected barrister and columnist, along with four others, were convicted of participating and organizing an unauthorized march in 2019.

The prosecution of veteran pro-democracy figures in Hong Kong has been held up by their supporters as a severe assault on the freedom of speech and other civil liberties that once were core to the city’s identity. Hong Kong’s authorities have overseen an expansive crackdown on the pro-democracy movement since the city was engulfed by antigovernment protests in 2019. More than 2,400 people have been charged as the authorities sought to quash the movement that had posed the greatest challenge to Beijing’s rule in decades.

Beijing has sought to depict several of the opposition figures in court on Thursday as subversive elements working with hostile foreign forces to undermine Chinese sovereignty. Critics of this view say the ruling Communist Party is only deflecting the true democratic aspirations of the Hong Kong people.

denounced in Chinese state media as being part of a “Gang of Four” who stirred unrest in 2019, an accusation at odds with the largely leaderless movement in the streets.

The case centered on a rally on August 18, 2019 when hundreds of thousands of people gathered in an antigovernment protest.

dropped the case after coming under sharp criticism at home. Dominic Raab, the British foreign secretary, had said Mr. Perry was “pretty mercenary” and was giving the Chinese government a public relations win.

The State Department, in an annual report on Hong Kong issued Wednesday, said that the Hong Kong government “did not respect” the right to free assembly provided under local law, and that by imposing a national security law last year, China had “dramatically undermined rights and freedoms in Hong Kong.”

The trial took 20 days, twice as long as had been scheduled initially.

The defendants, who also include the labor organizer Lee Cheuk-yan and the former lawmakers Cyd Ho and Leung Kwok-hung, face up to five years in prison. Sentences will be handed down at a later date.

The verdict could set expectations for several trials on similar charges of illegal protests set to take place this year.

In addition, 47 pro-democracy politicians and activists have been charged with subversion under the new security law for participating in an election primary that prosecutors say was part of plan to subvert the government.

Mr. Lai, the media tycoon, has been charged in a separate national security case for allegedly lobbying for American sanctions against Hong Kong and Chinese officials.

AUSTIN, Texas--(BUSINESS WIRE)--As the first multifamily management company to be recognized in the Public Relations and Marketing Excellence Awards, … END_OF_DOCUMENT_TOKEN_TO_BE_REPLACED

There have been whispers of cooling housing and rental prices in the San Francisco Bay Area, but that hasn't yet translated into practical, noticeable … END_OF_DOCUMENT_TOKEN_TO_BE_REPLACED

Cars pass in Independence Square at twilight in Kyiv, Ukraine, Monday, Oct. 31, 2022. Rolling ... [+] blackouts are increasing across Ukraine as the … END_OF_DOCUMENT_TOKEN_TO_BE_REPLACED