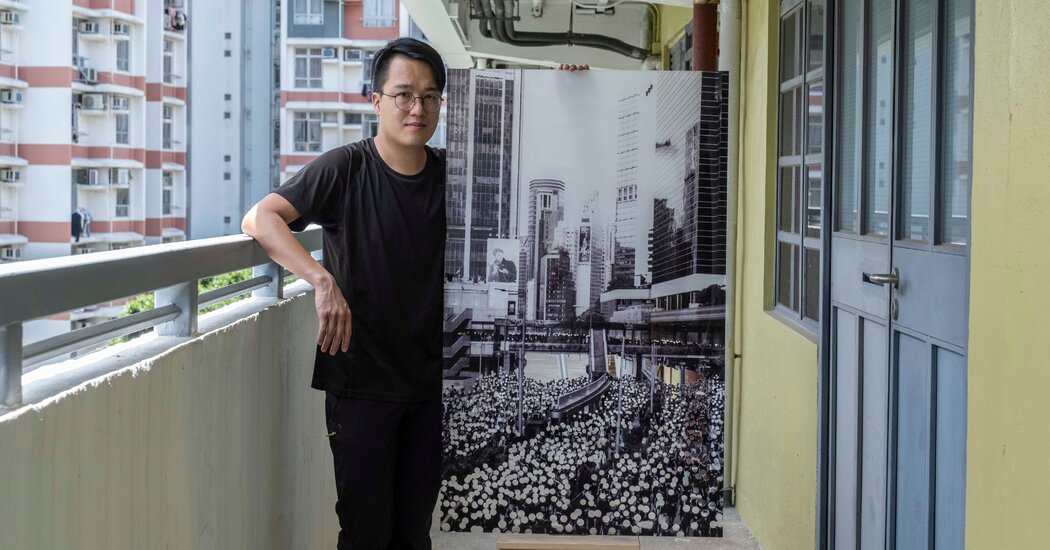 HONG KONG — As tear gas and fiery street clashes swirled around her two years ago, the Hong Kong painter Bouie Choi wondered how she would eventually render them on canvas.

The answer, exhibited at a local gallery about a year later, was “borrowed space_borrowed time,” her suite of brooding, ethereal landscapes that evoked ancient Chinese scroll paintings and captured a city transformed by civil unrest. Specific visual references to the protests were subtly blended into layer upon layer of washed-out acrylic brush strokes.

“My previous landscape works were quite peaceful and distanced from what happened in reality; they were more surrealistic,” Ms. Choi, 33, said in an interview. “But this exhibition was quite different because the relationship between me and the city had changed.”

street art and political posters that lionized protesters as heroes or explicitly poked fun at Hong Kong’s government and its allies in Beijing. Some of that work was produced by people with established careers in fine arts.

a national security law that China’s central government imposed on the territory last summer and the mass arrests of opposition politicians, activists and lawyers that followed.

Artists, writers and filmmakers know that whatever they create could run afoul of the national security law, which criminalizes anything that the Chinese government deems terrorism, secession, subversion or collusion with foreign powers. Institutions like art galleries are wary of taking risks. One curator said privately that talking about art and politics was especially sensitive ahead of Art Basel Hong Kong, a major international fair that opens this week.

Some Hong Kong curators have been quietly asking artists to tone down certain pieces, consulting with lawyers about how to avoid prosecution under the national security law and even calling the police to discuss potentially sensitive works before exhibiting them, said Wong Ka Ying, a member of a union that represents about 400 Hong Kong artists.

“We now act like we’re in Beijing or Shanghai,” she said.

Yet several young Hong Kong artists are daring to produce work about the 2019 protests anyway, albeit with heavy doses of abstraction and ambiguity. A few talk about their artistic process in polemical terms; others, like Ms. Choi, say they are merely responding creatively to the experience of living through a once-in-a-generation trauma.

pro-democracy demonstrations that are now seen as preludes to the giant outpouring of civil disobedience in 2019.

Eight years ago, for example, the artist South Ho walled and unwalled himself with bricks that said, “Made in Xianggang,” the word for Hong Kong in Mandarin, mainland China’s dominant tongue. Photographs of his stunt were exhibited in 2017 by the Asia Society’s Hong Kong gallery, alongside other pieces that conveyed a sense of helplessness toward Beijing’s tightening grip on the city.

Now the space for expression is narrower. A government funding body recently said that it had the power to end grants to artists who promote “overthrowing the government,” and state-owned newspapers have denounced a collection by a local museum that is expected to open soon and owns works by the dissident Chinese artist Ai Weiwei.

More than a dozen Hong Kong artists and gallerists either declined to be interviewed for this article or did not respond to requests for comment.

traffic scene on wire mesh to depict fences that went up near a cross-harbor tunnel that antigovernment protesters targeted in 2019. He also used yellow tape to frame walls where the authorities had painted over antigovernment graffiti.

Unreasonable Behavior,” a mixed-media solo show by Siu Wai Hang that included photographs of the 2019 protests that the artist had punched, ripped or cut.

Teenage girls with bricks,” an abstract work with collapsing perspectives and vague pastel figures. The gallery’s curatorial statement said the work depicted female protesters who had been discouraged by male comrades from joining the front lines of street clashes.

And this spring, at the Asia Society’s Hong Kong gallery, the artist Isaac Chong Wai installed “Falling Carefully,” a mixed-media piece featuring three life-size mannequins of the artist, each suspended in a different stage of free fall. A nearby wall displayed his sketches of protesters and riot police officers during antigovernment demonstrations in Hong Kong and beyond, including Armenia, Russia and Uganda.

Henry Au-yeung, the director of Grotto Fine Art, the gallery that exhibited the paintings last fall, wrote in an essay that they depicted “social unrest,” but also that “clear images do not mean clarity of event; what is veiled can well be the hidden truth.”

AUSTIN, Texas--(BUSINESS WIRE)--As the first multifamily management company to be recognized in the Public Relations and Marketing Excellence Awards, … END_OF_DOCUMENT_TOKEN_TO_BE_REPLACED

There have been whispers of cooling housing and rental prices in the San Francisco Bay Area, but that hasn't yet translated into practical, noticeable … END_OF_DOCUMENT_TOKEN_TO_BE_REPLACED

Cars pass in Independence Square at twilight in Kyiv, Ukraine, Monday, Oct. 31, 2022. Rolling ... [+] blackouts are increasing across Ukraine as the … END_OF_DOCUMENT_TOKEN_TO_BE_REPLACED