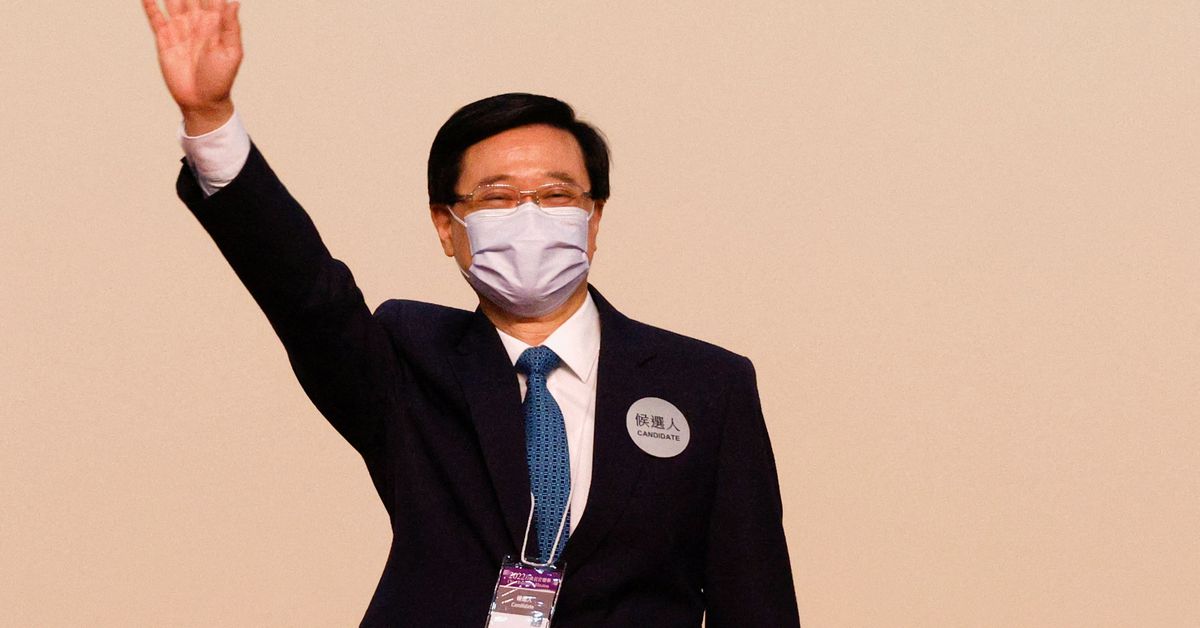 HONG KONG, May 8 (Reuters) – Hong Kong’s leader-in-waiting, John Lee, was endorsed for the city’s top job on Sunday by a committee stacked with pro-Beijing loyalists, as the financial hub attempts to relaunch itself after several years of political upheaval.

Lee, the sole candidate, received the votes of 1,416 members of a pro-Beijing election committee on Sunday morning, granting him the majority required to anoint him as Hong Kong’s next leader. Eight voted to “not support” him.

Speaking afterwards, Lee said it was his “historic mission” to lead a new chapter for Hong Kong, while pledging to unite the city and preserve Hong Kong’s international status as an open, and more competitive financial hub bridging China and the world.

Few of the city’s 7.4 million people have any say in choosing their leader, despite China’s promises to one day grant full democracy to the former British colony, which returned to Chinese rule in 1997.

Security was tight around the venue, with police preventing a small group of protesters from approaching.

“We believe we represent many Hong Kong people in expressing opposition to this China-style, single-candidate election,” said Chan Po-ying, a protester with the League of Social Democrats, holding up a banner demanding full democracy.

John Lee waves on stage after being elected as Hong Kong’s Chief Executive, in Hong Kong, China, May 8, 2022. REUTERS/Tyrone Siu

Lee, a former Hong Kong secretary for security, has forcefully implemented China’s harsher regime under a national security law that has been used to arrest scores of democrats, disband civil society groups and shutter liberal media outlets, such as Apple Daily and Stand News.

Western governments, including the United States, say that freedoms and the rule of law have been undermined by the security legislation that was imposed by Beijing in 2020. read more

Lee, however, reiterated Beijing’s view that the law is necessary to restore stability after protracted pro-democracy protests in 2019, sidestepping questions on whether he would seek reconciliation with opposition democratic advocates and those who have been jailed.

“Safeguarding our country’s sovereignty, national security and development interests, and protecting Hong Kong from internal and external threats, and ensuring its stability will continue to be of paramount importance,” Lee told reporters.

Some critics say Lee’s attempts to relaunch Hong Kong internationally could be affected by sanctions imposed on him by the United States in 2020 over what Washington said was his role in “being involved in coercing, arresting, detaining, or imprisoning individuals” under the security law.

Lee said his priority would be to boost housing supply in one of the world’s most expensive housing markets, and to bolster policy effectiveness with a “results orientated approach” in tackling this entrenched issue.

Lil Wayne has just listed his modern megamansion in Miami Beach for an equally mega sum of $29.5 million.The rapper (whose legal name is Dwayne … END_OF_DOCUMENT_TOKEN_TO_BE_REPLACED