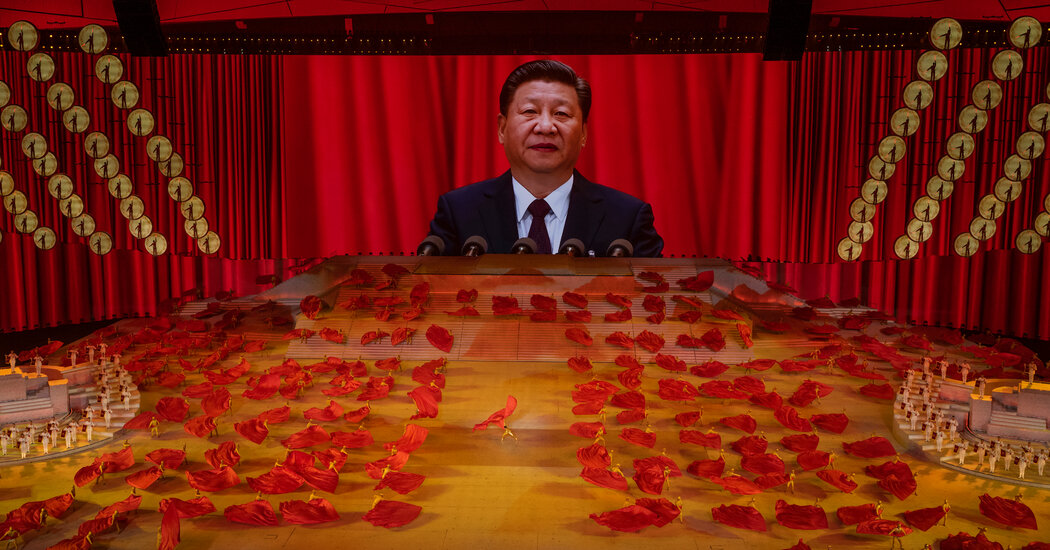 When the International Olympic Committee met seven years ago to choose a host for the 2022 Winter Games, China’s leader, Xi Jinping, sent a short video message that helped tip the scale in a close, controversial vote.

China had limited experience with winter sports. Little snow falls in the distant hills where outdoor events would take place. Pollution was so dense at times that it was known as the “Airpocalypse.”

Mr. Xi pledged to resolve all of this, putting his personal prestige on what seemed then like an audacious bid. “We will deliver every promise we made,” he told the Olympic delegates meeting in Malaysia’s capital, Kuala Lumpur.

host of the Summer Olympics, the Games have become a showcase of the country’s achievements. Only now, it is a very different country.

China no longer needs to prove its standing on the world stage; instead, it wants to proclaim the sweeping vision of a more prosperous, more confident nation under Mr. Xi, the country’s most powerful leader since Mao Zedong. Where the government once sought to mollify its critics to make the Games a success, today it defies them.

Beijing 2022 “will not only enhance our confidence in realizing the great rejuvenation of the Chinese nation,” said Mr. Xi, who this year is poised to claim a third term at the top. It will also “show a good image of our country and demonstrate our nation’s commitment to building a community with a shared future for mankind.”

Mr. Xi’s government has brushed off criticism from human rights activists and world leaders as the bias of those — including President Biden — who would keep China down. It has implicitly warned Olympic broadcasters and sponsors not to bend to calls for protests or boycotts over the country’s political crackdown in Hong Kong or its campaign of repression in Xinjiang, the largely Muslim region in the northwest.

combat Covid and imposed stricter safety measures than those during the Summer Olympics in Tokyo last year. It has insisted on sustaining its “zero Covid” strategy, evolved from China’s first lockdown, in Wuhan two years ago, regardless of the cost to its economy and its people.

an accusation of sexual assault by the tennis player Peng Shuai, a three-time Olympian, the I.O.C. did not speak out. Instead, it helped deflect concerns about her whereabouts and safety.

staggering costs of the 2014 Winter Games in Sochi, Russia, and the white-knuckle chaos of preparations for the 2016 Summer Games in Rio de Janeiro.

blue skies. High-speed railways have slashed the trip from Beijing to the most distant venues from four hours to one.

In an area perennially short of water, China built a network of pipelines to feed a phalanx of snow-making machines to dust barren slopes in white. Officials this week even claimed the entire Games would be “fully carbon neutral.”

Christophe Dubi, executive director of the upcoming Games, said in an interview that China proved to be a partner willing and able to do whatever it took to pull off the event, regardless of the challenges.

The committee has deflected questions about human rights and other controversies overshadowing the Games. While the committee’s own charter calls for “improving the promotion and respect of human rights,” officials have said that it was not for them to judge the host country’s political system.

Growing wariness of organizing the quadrennial event gave China an unexpected advantage. Beijing — no one’s idea of a winter sports capital — could reuse sites from the 2008 Games, including the iconic Bird’s Nest stadium for the opening ceremony. The Water Cube, which held the swimming and diving events 14 years ago, was rebranded as the Ice Cube.

Almaty, the former capital of Kazakhstan, once a republic of the Soviet Union.

The final tally was 44 to 40 for Beijing, with one abstention. Almaty’s supporters were left to fume over a glitch in the electronic voting system that prompted a manual recount to “protect the integrity of the vote.” That Kazakhstan has plunged into political turmoil on the eve of the Games seems now, in hindsight, further validation of the choice to pick Beijing.

ceremonial scepter popular in the Qing dynasty, complete with a 6,000-seat stadium at the bottom that is supposed to hold soccer matches after the Olympics.

military preparations for the Games, including the installation of 44 antiaircraft batteries around Beijing, even though the likelihood of an aerial attack on the city seemed far-fetched.

“A safe Olympics is the biggest symbol of a successful Beijing Olympic Games, and is the most important symbol of the country’s international image,” he said then.

accusation of sexual harassment rocked the sports world last fall, the committee found itself caught in the furor.

fumed in private. Without the protective cover of the international committee, they feared reprisals if they spoke out individually.

The 2008 Olympics also faced harsh criticism. A campaign led by the actress Mia Farrow called the event the “genocide games” because of China’s support for Sudan despite its brutal crackdown in the Darfur region. The traditional torch relay was hounded by protests in cities on multiple continents, including Paris, London, San Francisco and Seoul.

The accusations against China today are, arguably, even more serious. The United States and other countries have declared that China’s crackdown against the Uyghur Muslims in Xinjiang amounts to genocide. Ms. Farrow’s biting sobriquet has resurfaced for 2022, with a Twitter hashtag.

only screened spectators of its own choosing. It will mostly be a performance for Chinese and international television audiences, offering a choreographed view of the country, the one Mr. Xi’s government has of itself.

If the coronavirus can be kept under control, Beijing could weather the Olympics with fewer problems than seemed likely when it won the rights to the Games seven years ago. Mr. Xi’s government has already effectively declared it a success. A dozen other Chinese cities are already angling for the 2036 Summer Olympics.

“The world looks forward to China,” Mr. Xi said in an New Year’s address, “and China is ready.”

Lil Wayne has just listed his modern megamansion in Miami Beach for an equally mega sum of $29.5 million.The rapper (whose legal name is Dwayne … END_OF_DOCUMENT_TOKEN_TO_BE_REPLACED