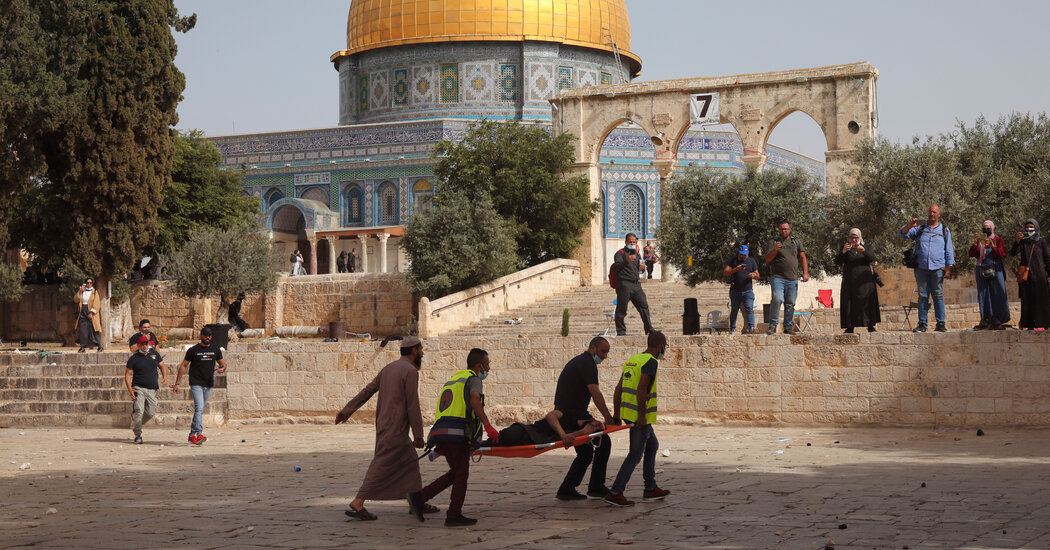 JERUSALEM — Hundreds were injured as clashes between Israeli police and Palestinian protesters broke out Monday morning at the Aqsa mosque compound in Jerusalem, a site sacred to both Muslims and Jews, after a week of rising tension in the city. Police fired rubber-tipped bullets and stun grenades at stone-throwing Palestinians who had stockpiled stones at the site in expectation of a standoff with Jewish far-right groups.

By midmorning, more than 50 people had been transferred to the hospital, according to a representative of the Palestinian Red Crescent. One person was hit in the head by a bullet and was in a critical condition, the medical aid group said. Nine police officers were injured, a police spokesman said.

Videos posted on Twitter showed chaos both outside and inside the mosque, where some worshipers could be seen sheltering from explosions while others threw stones and set off fireworks. In another clip, police officers were seen striking a man being detained in part of the mosque compound.

Another video released by the police showed young men throwing stones from the perimeter of the mosque compound onto the land below. A separate clip, taken by a surveillance camera, appeared to show a Jewish man driving into a passer-by after stones hit his car.

Jerusalem Day is always fraught. But the atmosphere was especially febrile on Monday because the confrontations followed weeks of escalating tensions in the city, where restrictions on Palestinian access to the Old City during the holy month of Ramadan, a far-right march through the city center in April, and street assaults by both Jews and Arabs have all contributed to a feverish atmosphere.

the looming expulsion of several Palestinian families from their homes in Sheikh Jarrah, East Jerusalem. For Palestinians and their advocates, the case has become a stand-in for the wider campaign to force out Palestinians from parts of East Jerusalem and for their past displacement in the occupied territories and within Israel.

Militants in Gaza fired rockets into Israel overnight Sunday, after sending incendiary balloons into Israeli farmland for the past several days. Israel has returned fire, barred fishermen from the territory from accessing the sea and shut a key crossing between Gaza and Israel — but avoided a major escalation.

was postponed on Sunday, in part to diffuse these rising tensions. The Israeli police also made a last-minute decision Monday morning to block Jews from accessing the Aqsa compound, known to Jews as the Temple Mount and to Muslims as the Noble Sanctuary.

The Palestinian Authority recently canceled what would have been the first Palestinian elections in 15 years.

And after a fourth Israeli election in just two years, Israeli opposition parties are locked in negotiations to form a coalition government and replace Benjamin Netanyahu, the country’s prime minister. Mr. Netanyahu is serving in a caretaker capacity as he stands trial on corruption charges.

It’s a property that offers a unique open floor plan—plus a hot tub with a view.“It was a Methodist church located in a historic little area of St. … END_OF_DOCUMENT_TOKEN_TO_BE_REPLACED