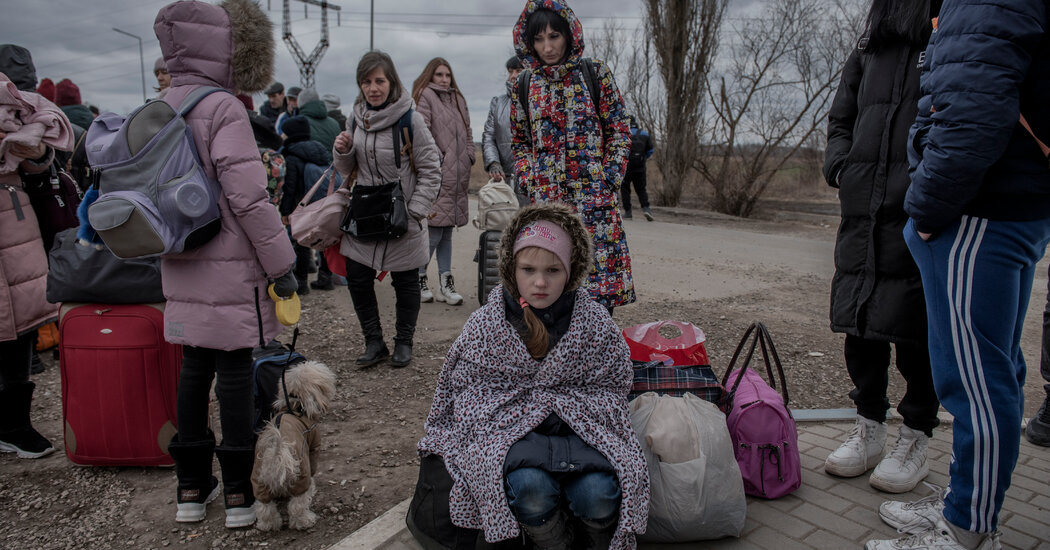 I just had a feeling that we had to get out of there. Every minute you hear these explosions, these shots somewhere nearby, it’s hard to understand, are you a target? Even if it’s silent, the silence feels ominous. There is just this constant sense of danger.

And I had a great sense of guilt that I was not protecting my children. I felt like a terrible mother because my children are in danger and they’re suffering. It’s cold and they have nothing to eat. So, we decided to leave.

We needed to get to Irpin. There was some kind of transfer that would help take us to Kyiv. To get there, we had to cross this park. And as we entered the park, some kind of madness started. It was shelling, it was shooting. We all fell to the ground and covered our heads. Everywhere around us, there was glass exploding, flying glass. My husband put his body over my daughter, the youngest one.

The bridge was out. So, we had to walk across this piece of metal. Suddenly, again, there was shooting from both sides. There was a sound of the shots hitting metal. We got to the ground, on our palms, you know? And on the other side, there was a soldier, one of ours. He picked up Marina, my youngest daughter. She thought it was all a game. When he picked her up, she laughed.

I write TV shows. But now I feel like I’m a character in one of them. I didn’t want to leave my homeland. I was satisfied with my country, even with all its shortcomings and all its complications. But now I understand that tomorrow is my last day in my country. I don’t want to be a refugee somewhere in a foreign land. I’ll miss my home. I’ll miss my things, our photographs, pictures of my parents. I left my diaries, my children’s toys, my dresses.

Interviewed on March 11. She escaped Mariupol, a port city in southern Ukraine that has been under siege by the Russian military for more than two weeks.

The Bay Area is the last place in the U.S. with rental prices below pre-pandemic levels, according to a new report from Apartment List. That seems … END_OF_DOCUMENT_TOKEN_TO_BE_REPLACED

BUCHA, Ukraine — A breeze rustles through the cherry blossoms in bloom on almost every block in this small city, the white petals fluttering onto … END_OF_DOCUMENT_TOKEN_TO_BE_REPLACED