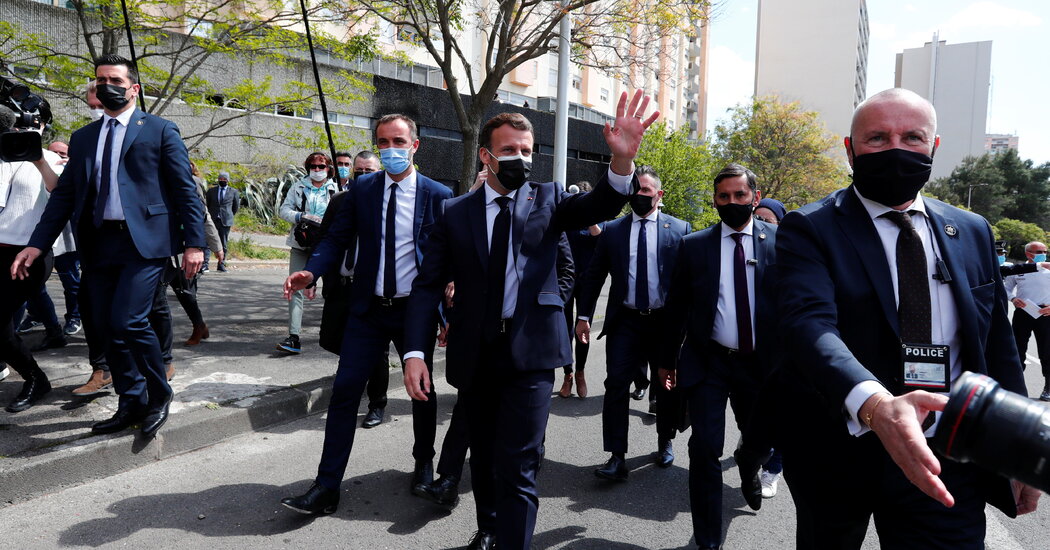 PARIS — The French government on Tuesday initiated a wide-ranging public debate on France’s model of secularism, seeking to gain the upper hand on a contentious topic that has roiled the nation in recent months and is likely to be a battleground in a presidential election next year.

Marlène Schiappa, the minister of citizenship, assembled a small group of intellectuals at a gathering in Paris, kicking off what is expected to be a monthslong series of discussions that she described as the “Estates-General on laïcité’’ — referring to the historic assemblies held in France to debate the fundamentals of French society.

Known as laïcité, the French secularism separating church and state has served as the bedrock of the country’s political system for more than a century.

“In every country, there are words that are important, that can’t be overlooked,’’ Ms. Schiappa said, describing laïcité as an idea in which “French destiny is found.’’

announced to a French newspaper over the weekend, caught many by surprise because of its timing and its intentions. It is starting just as lawmakers are wrapping up work on a bill that is intended to reinforce the country’s principles of secularism and to combat Islamism.

Led by Ms. Schiappa — a high-profile minister who has espoused a strict view on secularism — the debate comes as President Emmanuel Macron tries to fend off an increasing threat from the right and far right ahead of next year’s presidential election.

As Mr. Macron tries to burnish his credentials as a defender of a strict vision of laïcité, he has also moved to seize another issue important to right-wing voters: crime.

Following months of attention on the government’s stumbling coronavirus vaccination campaign, Mr. Macron pledged on Monday to be tough on crime, to crack down on recreational drugs and to recruit 10,000 additional police officers by the end of his current five-year term. The promises were made in a long, tough-talking interview he gave to a conservative newspaper, Le Figaro, that another publication described as reminiscent of Rudolph Giuliani, the combative former mayor of New York.

On Monday, Mr. Macron visited drug-dealing spots in the southern city of Montpellier, talking to police officers and riding along inside a police car. Even as Ms. Schiappa inaugurated the debate on secularism, Mr. Macron’s prime minister and justice minister visited a prison under construction in eastern France to announce details of the government’s expansion of the prison system.

Laïcité Observatory, a government watchdog that supporters of a strict laïcité long criticized as being soft. The government’s bill against Islamism also intends to enforce the country’s principles of secularism by gaining greater control over Muslim and other religious organizations, and by restricting home and private schooling.

Appearing inside a church that had been converted into a government building, Ms. Schiappa spoke about the need for a “calm’’ discussion on laïcité. But the heated nature of the debate could be seen as some of the six invited intellectuals — four in favor of a strict laïcité and two against — took barely concealed swipes at one another.

Conservative intellectuals said that laïcité was a universalist principle and a useful tool to fight against Islamism and an identity-driven fragmentation of society.

Raphaël Enthoven, a philosopher, criticized those who, in the name of tolerance toward religions, favor a liberal version of laïcité, saying it plays into the hands of Islamists. “Laïcité is the object of prosecution and despicable propaganda which consists in presenting it almost as racism,” Mr. Enthoven said.

French Democratic Confederation of Labor, said it was a bad idea to initiate these discussions while the separatism bill had yet to become law.

“We must stop making laïcité a permanent object of media agitation,’’ he said in a tweet.

Mr. Macron’s two-pronged efforts on laïcité and crime this week come as polls show him neck-and-neck with Marine Le Pen, the leader of the far-right National Rally, in next year’s presidential election. With voters moving to the right and France’s left-leaning parties in shambles, Mr. Macron’s electoral strategy rests on winning over right-leaning voters who might be tempted to migrate to the extreme right.

Polls show that while support for Macron has remained steady overall, he has lost support among right-wing voters over the past four months. While 48 percent of conservative voters and 20 percent of far-right supporters said they were satisfied with him in December, according to an IFOP study, that proportion fell to 30 percent and 13 percent in April, according to the same polling firm.

Mr. Macron has also been under pressure from the right-controlled Senate, which last week passed a toughened version of his bill against Islamism, adding a series of amendments that critics said risked discriminating against Muslims.

Many of the new measures stem from debates over the wearing of the Muslim veil. They include a ban on ostentatious religious symbols or clothing for minors in the public space and in sport tournaments, as well as for parents accompanying children on school outings. They also enable local authorities to ban the full-body swimsuit that some Muslim women wear at swimming pools and empower mayors to ban foreign flags in and around city hall buildings during wedding celebrations.

AUSTIN, Texas--(BUSINESS WIRE)--As the first multifamily management company to be recognized in the Public Relations and Marketing Excellence Awards, … END_OF_DOCUMENT_TOKEN_TO_BE_REPLACED

There have been whispers of cooling housing and rental prices in the San Francisco Bay Area, but that hasn't yet translated into practical, noticeable … END_OF_DOCUMENT_TOKEN_TO_BE_REPLACED

Cars pass in Independence Square at twilight in Kyiv, Ukraine, Monday, Oct. 31, 2022. Rolling ... [+] blackouts are increasing across Ukraine as the … END_OF_DOCUMENT_TOKEN_TO_BE_REPLACED