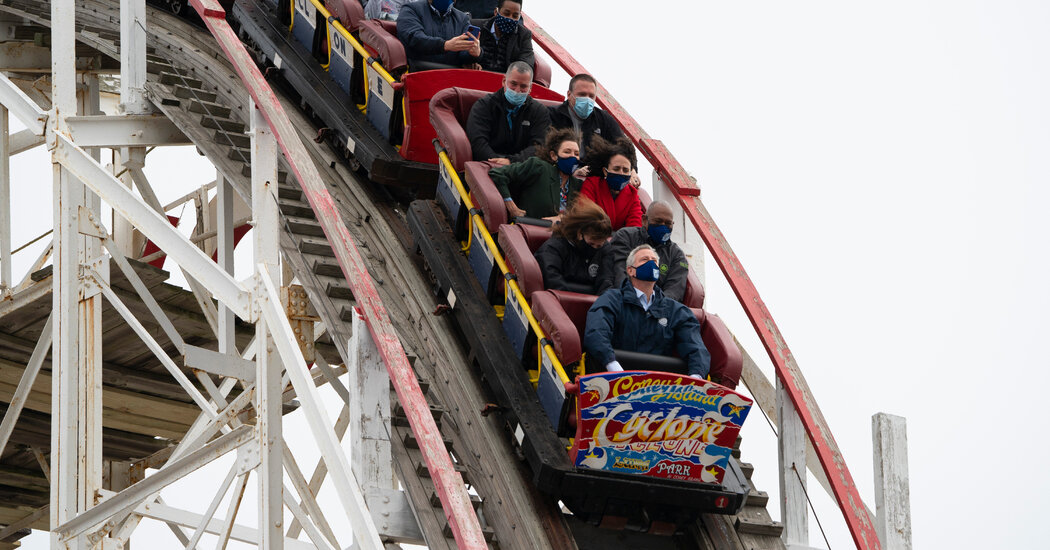 This has been a spring of reopenings around New York City.

Bars, restaurants, hotels, movie theaters and even amusement parks are coming back to life after the shutdown. Rather than just turn on the lights and open the doors, many owners have sought to celebrate with meaningful gestures.

When Coney Island reopened its amusement park this month, the first passengers to ride the Cyclone, the 90-year-plus wooden roller coaster there, were 100 essential workers from nearby Coney Island Hospital who had been selected in a raffle.

One of the riders was Dawn Lanzisera, who works in the psychiatric emergency room and grew up near the Brooklyn neighborhood. “It’s so great to be here and see life return,” she said.

As soon as the speeches had concluded and the gates had opened, the rickety roller coaster cars, filled with hospital employees, started their climb to the top, one that offered stunning views of the ocean and boardwalk.

As the coaster plunged 85 feet, the screams may have reflected the release of a pandemic year’s worth of tensions.

AUSTIN, Texas--(BUSINESS WIRE)--As the first multifamily management company to be recognized in the Public Relations and Marketing Excellence Awards, … END_OF_DOCUMENT_TOKEN_TO_BE_REPLACED

There have been whispers of cooling housing and rental prices in the San Francisco Bay Area, but that hasn't yet translated into practical, noticeable … END_OF_DOCUMENT_TOKEN_TO_BE_REPLACED

Cars pass in Independence Square at twilight in Kyiv, Ukraine, Monday, Oct. 31, 2022. Rolling ... [+] blackouts are increasing across Ukraine as the … END_OF_DOCUMENT_TOKEN_TO_BE_REPLACED