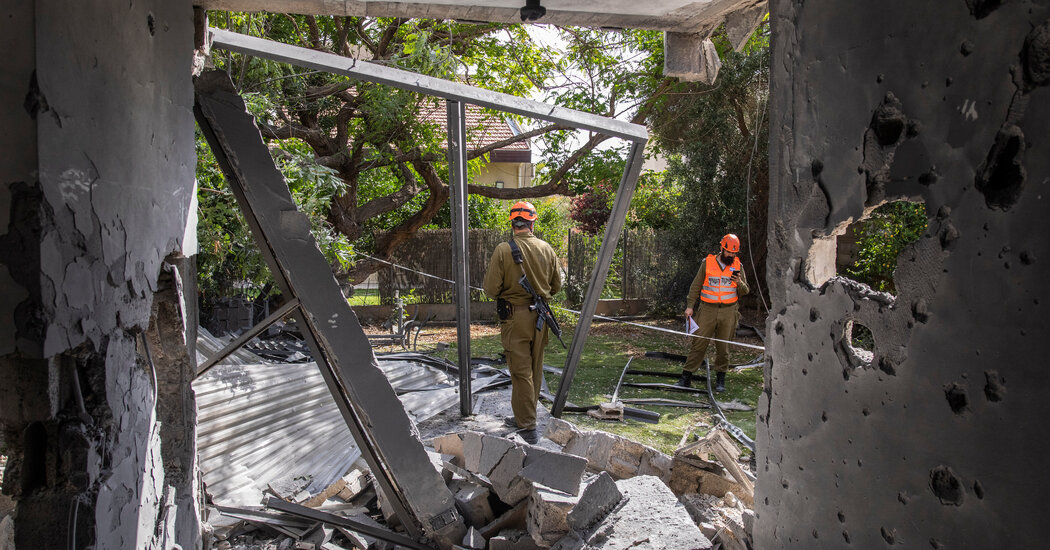 ASHKELON, Israel — Residents of Ashkelon, a coastal city barely a dozen miles north of Gaza, emerged gingerly from their houses on Friday — with the skies as calm as the nearby sea.

For more than a week, the coastal city, which is within the range of rockets fired by Hamas, had been under siege.

And even after four major conflicts between Israel and the militant groups in Gaza in the past 12 years — with the threat of rocket fire a familiar part of life — it is not something people would ever typically get used to.

But this time, residents said, it was different. More furious and intense, with barrages of up to 40 rockets at a time.

Those that slipped through Israel’s vaunted Iron Dome antimissile system crashed into the city with greater impact than in the past.

Two women died here in a direct strike on their building at the start of the fighting: Nella Gurevitz, 52, and Soumya Santosh, 32, a caregiver.

Even after the cease-fire took effect on Friday, Marina, an open-air leisure complex with a lagoon of anchored small yachts, ice cream parlors and fish restaurants — usually packed with people at the start of the weekend — was almost empty.

Out walking with her partner for the first time since the violence started on May 10, Ms. Yaakobov also expressed a disappointment and concern felt by many here, that the truce had come too early, and that the latest bout of fighting would resolve nothing.

In one of the older neighborhoods — filled with dilapidated housing projects from the 1950s — small, reinforced concrete shelters dotted the sidewalk. But for many residents they were simply too far away to run and take cover in, with sirens providing only 10 or 15 seconds warning of incoming rockets.

Ludmilla Gavrielov, 72, a Moldova native with mobility problems, said she had no chance of reaching a shelter in time, and had instead huddled by a wall in her apartment.

Off South Africa Boulevard, in a more well-heeled section of the city, where the roads are lined with attractive single-family homes, one had suffered a direct hit on Thursday afternoon, about 12 hours before the start of the cease-fire.

Large Israeli flags had been hung on the front fence in a sign of defiance. The back corner of the villa had been blown away and was in danger of collapse. Pictures still hung on the inner walls, unscathed.

Next door, Tzvi and Yehudit Berkovitch, grandparents in their 70s, were hurrying to cook for the Sabbath. They had been in their family shelter in the yard when the rocket struck, and had felt the blast.

“It’s annoying,” Ms. Berkovitch said. She was critical of the Israeli military and government. “In three or four years, there’ll be another round,” she said. “I think they didn’t finish the job.”

AUSTIN, Texas--(BUSINESS WIRE)--As the first multifamily management company to be recognized in the Public Relations and Marketing Excellence Awards, … END_OF_DOCUMENT_TOKEN_TO_BE_REPLACED

There have been whispers of cooling housing and rental prices in the San Francisco Bay Area, but that hasn't yet translated into practical, noticeable … END_OF_DOCUMENT_TOKEN_TO_BE_REPLACED

Cars pass in Independence Square at twilight in Kyiv, Ukraine, Monday, Oct. 31, 2022. Rolling ... [+] blackouts are increasing across Ukraine as the … END_OF_DOCUMENT_TOKEN_TO_BE_REPLACED