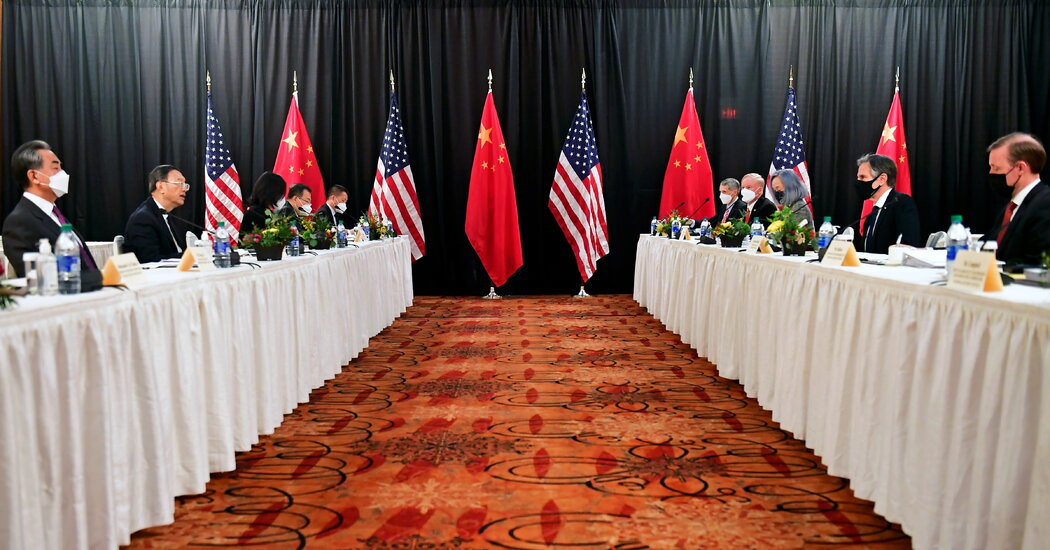 ANCHORAGE — Even before the Biden administration’s first face-to-face meeting with senior Chinese diplomats on Thursday, American officials predicted the discussions would not go well. They were right: The traditional few minutes of opening greetings and remarks dissolved into more than an hour of very public verbal jousting, confirming the expected confrontational tone between the geopolitical rivals.

U.S. officials said the two days of talks would continue, but immediately accused the Chinese delegation of violating the format for the sensitive discussions that had sought to find some common ground amid the many conflict points between them.

Yang Jiechi, China’s top diplomat, accused the United States of taking a “condescending” approach to the talks and said the American delegation had no right to accuse Beijing of human rights abuses or give lectures on the merits of democracy.

At one point, he said the United States would do well to repair its own “deep seated” problems, specifically pointing to the Black Lives Matter movement against American racism. At another, after it looked as if the opening remarks had concluded and journalists were initially told to leave the room to let the deeper discussions begin, Mr. Yang accused the United States of being inconsistent in its championing of a free press.

new economic sanctions that were issued against 24 Chinese officials on the eve of the talks. “This is not supposed to be the way one should welcome his guests,” said the Chinese foreign minister, Wang Yi.

But they clearly offended the Chinese diplomats, who seized on them as proof that the diplomatic overture was intended not to set ground rules for a bilateral understanding of each capital’s priorities, but to give the United States a home-turf platform for embarrassing Beijing.

The tit-for-tat, which a senior U.S. official described as “grandstanding” by the Chinese for their domestic audience, left little doubt that not much would be achieved from the diplomatic discussions. However, the official said later, the discussion cooled down after journalists left the room, and yielded a substantive conversation that lasted far longer than initially planned.

After an often-conflicting strategy for dealing with China over the past four years — which pit President Donald J. Trump’s desire for a trade deal against punishing Beijing for its rampant abuses of minority Uyghurs, military aggressions in regional waters and refusal to immediately address the coronavirus outbreak — the Biden administration has sought to take a new approach.

The new policy toward China is one based largely on competition — economic and diplomatic — but it is also prepared to alternately cooperate or confront Beijing when necessary. The talks in Anchorage were meant to set a baseline for that approach.

It is now unclear how much cooperation between the two nations will be possible, although that will be necessary to achieve a host of shared goals, including limiting Iran’s nuclear program and North Korea’s weapons systems.

Senior Biden administration officials had earlier joked that hopes of making much progress in the talks were so low that it would be more efficient for both sides to simply fax over their respective talking points.

GREENVILLE, N.C.--(BUSINESS WIRE)--Employers aiming to win the war on talent have a new “A” team to tap into: college and professional athletes. … END_OF_DOCUMENT_TOKEN_TO_BE_REPLACED

Mortgage rates are likely to rise in July, extending a seven-month streak. High inflation, and the Federal Reserve's efforts to control it, have … END_OF_DOCUMENT_TOKEN_TO_BE_REPLACED