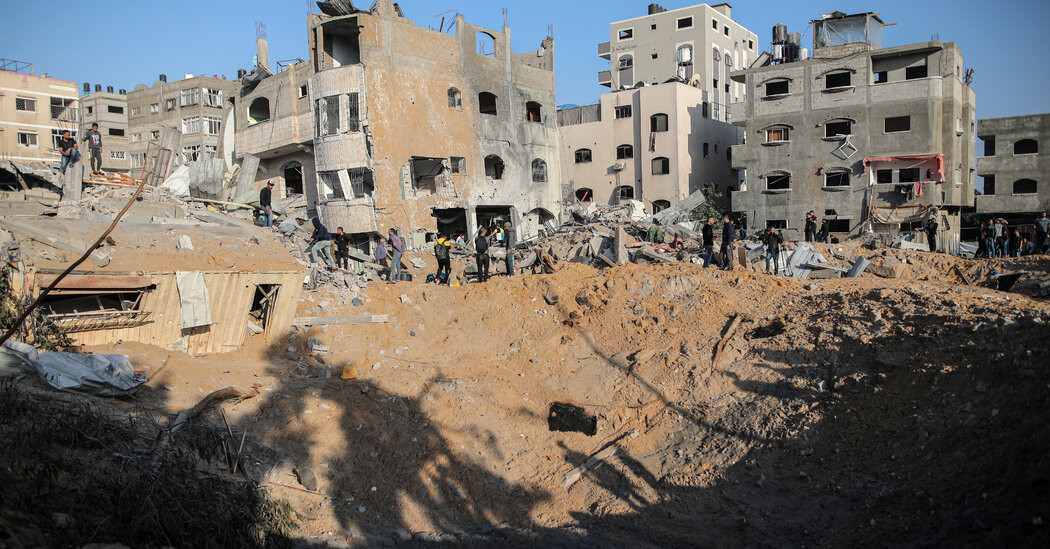 GAZA CITY — On Tuesday evening, Gazans celebrated as they heard the whoosh of rockets sent toward Israel.

But by Wednesday morning the cheers had stopped, as Gazans saw the aftermath of what some described as the most intense airstrikes since cross-border Israeli-Palestinian hostilities flared again this week.

In one neighborhood, near Zeitoun and Sabra, residents inspected their homes and neighborhoods for damage, and desperately sought information about where the missiles might strike next.

“I felt that the hits were random,” said Nadal Issa, 27, the owner of a bridal shop.

In Gaza, some said they had never felt anything as harrowing as the surge of Israeli strikes that came Wednesday morning.

Some said it felt as if blast waves were hitting their face and body, as if their block were under attack. Disoriented, they staggered to windows to look outside.

“My two children woke up, and they asked me, ‘What’s going on?’” Mr. Issa said. Thinking quickly, he reminded them that the holiday marking the end of Ramadan was near. “I told them these are celebrations for Eid.”

Mohammed Sabtie, a 30-year-old motorcycle mechanic, was among the Gazans who left their homes after the airstrikes subsided on Wednesday morning to see the damage.

“The sound was very, very horrific,” Mr. Sabtie said. “It was like a state of war. It was the first time I ever heard anything like this.”

Was he scared? Yes, he said, but also glad to see Palestinians fighting back.

AUSTIN, Texas--(BUSINESS WIRE)--As the first multifamily management company to be recognized in the Public Relations and Marketing Excellence Awards, … END_OF_DOCUMENT_TOKEN_TO_BE_REPLACED

There have been whispers of cooling housing and rental prices in the San Francisco Bay Area, but that hasn't yet translated into practical, noticeable … END_OF_DOCUMENT_TOKEN_TO_BE_REPLACED

Cars pass in Independence Square at twilight in Kyiv, Ukraine, Monday, Oct. 31, 2022. Rolling ... [+] blackouts are increasing across Ukraine as the … END_OF_DOCUMENT_TOKEN_TO_BE_REPLACED